» Lanka Walltile PLC Investment Case
by judecroos Today at 8:55 am

» Big opportunity in Kegalle Plantations
by EquityChamp Yesterday at 2:58 pm

» If you buy a stock that’s not going up in price, you won’t make any money. STOCK market for beginners
by dayandacool Yesterday at 11:31 am

» Thoughts on SINS
by Swissinvest Yesterday at 10:04 am

SEC gets tougher on Touchwood 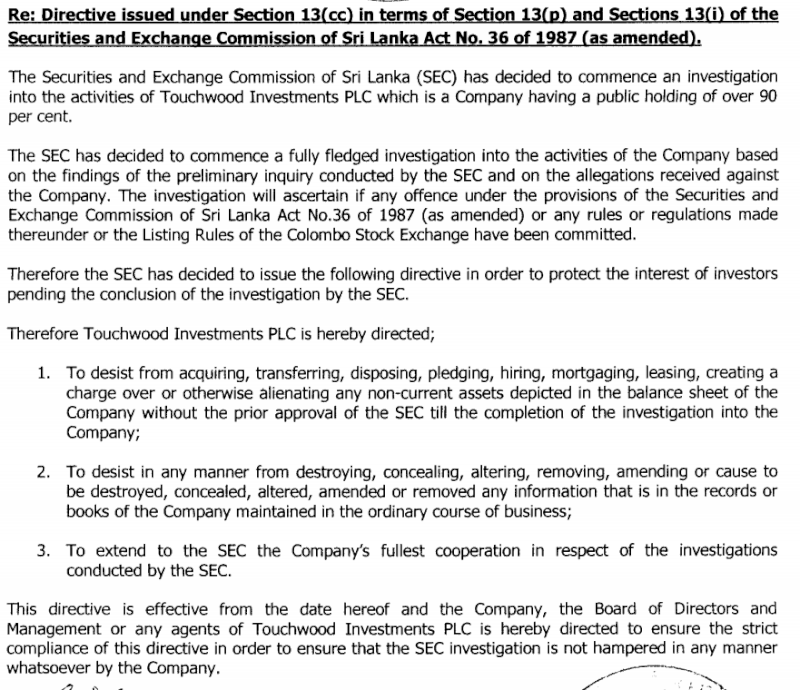 The Securities and Exchange Commission (SEC) yesterday took a tougher stance on Touchwood Investments Plc, (TWOD) imposing a freeze on its non-current assets, a first-of-its-kind move on a listed company.

The capital markets regulator also issued two other tough directives in addition to extending the suspension on the trading of TWOD shares by a further three days from 10 September, bringing the total to six.

On Wednesday last week during trading hours, SEC suspended TWOD shares following completion of preliminary investigations whilst emphasising a full-scale probe was ongoing. SEC action is because TWOD has a public holding of over 90% and to protect interests of investors.

The probe is independent of a defaulted customer filing winding up application in Western Province High Court.

“The SEC has decided to commence a fully-fledged investigation into the activities of the company (TWOD) based on the findings of the preliminary inquiry conducted by the SEC and on the allegations received against the company,” the capital market’s regulator said in a letter to TWOD and its Board of Directors.

“The investigation will ascertain if any offence under the provisions of the SEC Act No. 36 of 1987 (as amended) or any rules or regulations made thereunder or the Listing Rules of the CSE have been committed,” said the SEC letter, which issued three directives.

They are
1) To desist from acquiring, transferring, disposing, pledging, hiring, mortgaging, leasing, creating a charge over or otherwise alienating any non-current assets depicted in the Balance Sheet of the company without the prior approval of the SEC till the completion of the investigations;
2) To desist in any manner from destroying, concealing, altering, removing, amending or cause to be destroyed, concealed, altered, amended or removed any information that is in the records or books of the company maintained in the ordinary course of business; and
3) To extend to the SC the company’s fullest cooperation in respect of the investigations conducted by the SEC.

Touchwood styles itself as the pioneer of the agro-forestry investment industry in Sri Lanka. It specialises in the cultivation of high value exotic tropical timbers as an alternative and sustainable source of forest products (mahogany, vanilla, sandalwood, teak and other cash crops).

As per 2012/13 Annual Report, TWOD has planted over 400 trees of high-value timber in 2,854 acres spanning 42 plantations in six districts. This is in addition to timber plantations in Thailand in which customer deposits have been taken by the company.

SEC said the directives are effective with immediate effect and the company, the Board of Directors and management or any agents of TWOD are directed to ensure the strict compliance of this directives in order to ensure that the SC investigation is not hampered in any manner whatsoever by the company.

Latest shareholding however has changed with TWOD Chairman Roscoe Maloney having divested a considerable part of his stake, which was 17% as at March 2013. He sold 3.35 million shares between Rs. 1.80 and Rs. 2 each on Monday last week. The disclosure came late as mid-week TWOD crashed to an all-time low of 90 cents before recovering to Rs. 1.30 at the time of suspension. Largely arising out of biological assets TWOD’s net asset per share is Rs. 30 though analysts have questioned their valuation.

The dip was on account of a petition filed to wind up TWOD by Kurukula Arachchige Don Leonard Priyanka Nanayakkara (petitioner) in respect of Rs. 3.8 million, which the petitioner alleges to be due from Touchwood Investments.

“The company has already filed an affidavit of opposition to the winding up application and will take further steps to defend and oppose this action,” said the filing signed by Touchwood Deputy Chairperson S. Maloney.

Prior to suspension of trading, around 45 million shares of TWOD or a 42% stake traded during the week ended Thursday.

At present SEC and Touchwood have an ongoing case as well (SEC vs Touchwood Investments Ltd., C.A. (Writ)323/2007 and S.C. App. 100/2011) where the company filed an application in the Court of Appeal  against SEC and Sri Lanka Accounting and Auditing  Standards Monitoring Board (SLAASMB) seeking writs of  certiorari quashing the determination of SLAASMB and the  Directive of the SEC issued to the company dated 9 March  2007 through which the company was directed to prepare  financial statements for the years ended 31 March 2005 and 2006 on a cost basis in terms of IAS 41.

Despite styling itself as pioneer and in business for over a decade, TWOD remains saddled with over Rs. 500 million worth retained losses. Liabilities amounted to Rs. 4.7 billion as at end FY13, up from Rs. 3.7 billion a year earlier.
http://www.ft.lk/2013/09/10/sec-gets-tougher-on-touchwood/

@Market.Player wrote:Good....at last SEC is trying to do something
But toooooo late. I lost massive from TWOD.

SEC at last??? They again played their game very well. They were jsut waiting till Maloney get exit..Well played game. They just wanna slaught retailers...

Re: SEC gets tougher on Touchwood