» The market is not out to “get” you but is just flowing along, and your position just happens to be carried along with it.
by dayandacool Today at 4:49 pm

» What will happen tomorrow?
by reyaz Today at 4:04 pm

» GLAS will be winner with Super Gain.
by Promoney Today at 2:30 pm


Stock markets across the globe jumped following the Fed's announcement on Wednesday that it would hold off tapering its $85 billion-a-month bond-buying scheme.
The news was especially welcome in under-pressure developing economies, which breathed a sigh of relief after suffering a heavy sell-off in August as investors bet on the Fed winding down its quantitative easing (QE) policy.

"Ben Bernanke had threatened to take away the punchbowl and bring the QE-party to an end. But he's changed his mind... and told us all to party on," said Societe Generale fixed income strategist Kit Juckes.

"Emerging Markets is the asset class which suffered most from the 'taper talk' and is the one which is bouncing most as the removal of stimulus is delayed."

In Tokyo, the Nikkei rose 1.80 percent. Hong Kong added 1.67 percent and Sydney rallied 1.10 percent to finish at a five-year high.

With the prospect of vast sums of cash continuing to be pumped into financial markets, the US dollar sank against emerging economy currencies, which have suffered a torrid few months on expectations the Fed would begin tightening its monetary policy.

South Africa's JSE Top 40 index jumped 2.24 percent and the rand climbed to 9.6794 to the dollar, up about seven percent from a low point set last month.

In Turkey, the main BIST-100 stock index soared 6.4 percent, while the lira strengthened to 1.9599 to the dollar from 1.9975 late on Wednesday. The lira had touched a record low of 2.070 at the beginning of the month on Fed tapering expectations.

Turkish Finance Minister Mehmet Simsek called the news from the United States a "relief in the short-run," but warned Turkey cannot rely on Fed decisions.

"We will focus on structural reforms. Fed decisions are important but we cannot bank on them," Simsek was quoted as saying by local media.

US stocks struggled to hold onto their gains, however, with the Dow Jones Industrial Average falling 0.26 percent and the broad-based S&P 500 sliding 0.18 percent.

"You've got to expect a little bit of a pull-back" after Wednesday's "very explosive" rally, said Peter Cardillo of Rockwell Global Capital. "And it's not that much of a pullback."

In Brazil, Sao Paulo's main index was also giving up gains, falling back 1.1 percent after jumping 2.64 percent on Wednesday.

Analysts at Capital Economics in London said emerging markets had received a temporary reprieve that would not fix deeper structural problems, including big current account deficits in countries including South Africa, Turkey, Brazil, India and Indonesia.

"The Fed's decision yesterday not to taper its asset purchases just yet provides some breathing room for the more troubled emerging economies," they said in a note.
"But their structural problems remain and uncertainty about the outlook for Fed policy has arguably now increased... Some EM policymakers may be sighing in relief today, but they have been granted only a temporary reprieve."

Currency strategist Mike Keenan at ABSA Bank in Johannesburg said he was not convinced the moze would be a "silver bullet" for the rand or emerging markets as the Fed was eventually going to begin reducing its stimulus.

FED decision will not have a major impact on the local market – Deputy Governor, Central Bank

By: Prasanna C. Rodrigo
The Deputy Governor of Sri Lanka’s Central Bank, Dr. Nandalal Weerasinghe says, the decision by the Federal Reserve to maintain the bond buying program will not have a major impact on the local market, but will help raise overseas capital through lower borrowing costs.

"Since we didn’t see a significant short-term impact on Sri Lanka’s markets due to the FED’s earlier announcement about tapering, I don’t expect this surprise announcement would also have a major impact on our markets”, Weerasinghe told News360.lk.

He said, this is because Sri Lanka’s exposure to short-term volatile capital flows is very limited.

“This will have some positive impact through lower borrowing costs, if our banks such as NDB and DFCC are going to international capital markets to raise capital in the near future as planned, there borrowing cost is going to be lower than expected earlier”, he added.

Dr. Weerasinghe also said that he do not expect any short-term volatility in the Sri Lankan forex market going forward.

“The exchange rate will reflect market demand and supply conditions in the short-term and benign macroeconomic fundamentals in medium to long term”.

Sri Lanka’s forex market experienced some volatility before the FED announcement, which the Central Bank in its latest Monetary Policy statement attributed to the likely tapering of quantitative easing (QE)in the United States affecting emerging markets.
Weerasinghe, who is also a renowned economist, says the recent volatile situation was a result of speculators, who predicted that the rupee was likely to fall further due to FED tapering.


@balapas wrote:I think lot of people would have gained today from day trading

@balapas wrote:I think lot of people would have gained today from day trading

May be some retailers but definitely couple of big Broker Huts. You can see what gave much price appreciation. 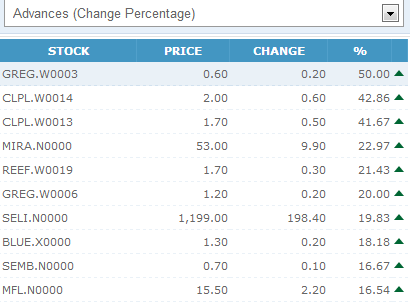 Can it continue to Monday and Tuesday, .... Remember this is still September . Yearly gains at CSE is just 3% .

Sri Lanka do hyou want to complete with other emerging/frontier markets? Then buckle up will ya.

A man walks under signage for Yes Bank Ltd. in Mumbai. Photographer: Dhiraj Singh/Bloomberg
Stocks fell after India’s central bank Governor Raghuram Rajan surprised economists by raising the benchmark rate in his first policy review, seeking to rein in inflation. Federal Reserve Bank of St. Louis President James Bullard said a small tapering of bond buying is possible next month after the Fed made a close call this week in deciding not to slow purchases.

“It’s a knee-jerk reaction by the market to say ‘oh they are rising interest rates, it is bad for banks,’” Christian Keller, the head of emerging-market research at Barclays Plc in London, said by phone. “A lot of people were rather betting on easing of monetary policies in India.”

Financial shares led losses among the 10 industries in the MSCI Emerging Markets Index, dropping 1.2 percent as a group. The measure for developing markets extended this year’s decline to 3.9 percent, trading at 10.7 times projected earnings, according to data compiled by Bloomberg. That trails the 14 valuation of the MSCI World Index.

Stocks in developing nations were set for a third weekly gain as the Fed unexpectedly refrained from reducing its $85 billion in monthly asset purchases, saying it needs to see more signs of sustained labor market gains.

“The emerging markets overall seemed to rally on the idea that there wasn’t going to be a giant sucking sound of liquidity as a result of the Fed cutting back on its stimulus,” Brian Jacobsen, who helps oversee $221.2 billion as chief portfolio strategist at Wells Fargo Advantage Funds in Menomonee Falls, Wisconsin, said by phone.

Asian currencies rallied this week by the most in a year as Malaysia’s ringgit strengthened 4 percent, the Thai baht appreciated 2.9 percent and the Indonesian rupiah gained 0.5 percent. Global funds bought $494 million more stocks than they sold in the first four days of the week in Indonesia, the Philippines and Thailand.

South Africa’s rand dropped 1.9 percent, the most in a month. The currency rose 0.5 percent for the week.
The premium investors demand to own emerging-market debt over U.S. Treasuries rose two basis points, or 0.02 percentage point, to 315 basis points, according to JPMorgan Chase & Co.

But positive global events certainly can make a mental shift of traders/other to drive the market up. Now if we can get back the GSP+ that would more positiveness. Are our politicos willing to work with "them" to obtain it?

@slstock wrote:The truth of the facts it , Sri Lanka market is so small and contained that  many global events does  not have an impact as Big as some other countries. ( ie India)
( not saying no impact at all)

But positive global events certainly can make a mental shift of traders/other to drive the market up.   Now if we can get back the GSP+ that would more positiveness. Are our  politicos  willing to work with "them" to obtain it?