Foreign investors were net buyers of 128.7 million rupees ($972,800) worth of shares on Friday, extending net foreign inflows in equities this year to 19.12 billion rupees.

'Most of the foreign funds will again look at emerging markets after Fed's surprise move,' said a stock broker.

The U.S. Federal Reserve's unexpected decision not to taper its monetary stimulus for now sparked short-covering across Southeast Asian exchanges on Thursday.

The Colombo stock market yesterday shot up sharply in response to positive impact following the US Federal Reserve’s decision on continuity of stimulus to the US.

The market’s value rose by Rs. 47 billion as the benchmark index gained by 113 points or near 2% whilst the blue chip S&P Sri Lanka 20 Index improved by 60 points or 2%.

Yesterday’s gain pushed ASI’s year to positive return to over 3%. Turnover was a healthy Rs. 850 million whilst the market saw a net foreign inflow of Rs. 129 million bringing the year-to-date figure back to Rs. 19
billion level. 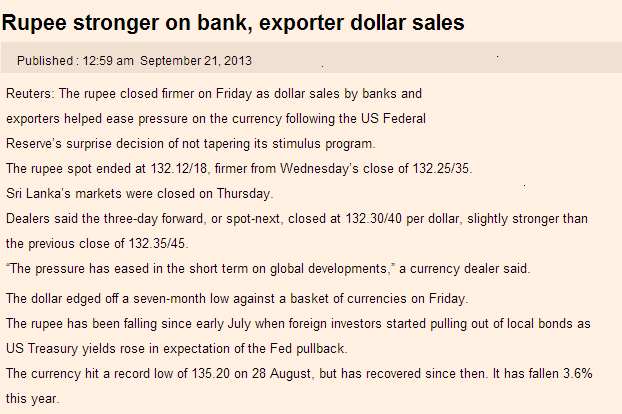 “Colombo shares regained lost ground and posted notable gains on Friday as investors welcomed the Fed’s surprise decision to keep its vast stimulus policy unchanged. The decision to maintain US stimulus policy was a great relief to the frontier markets such as Sri Lanka, which was suffering from fears of capital flight back to the developed world,” Lanka Securities added.

JKH highlighted the crossings board with five blocks which totalled 1.19 million shares transacted at Rs. 215 each. Aitken Spence recorded a crossing of 300,000 shares at a 52-week low (off-board) price of Rs. 113.3. The former touched Rs. 218.0 at its intra-day high before closing with a gain of 2.8% while the latter closed up marginally at Rs. 113.5.

Renewed interest was observed in Carson Cumberbatch supported by two on board blocks accumulating to 249,000 shares at Rs. 400 each. Commercial Bank also gathered some interest where mid-sized blocks traded at a price range of Rs. 113-114.90 and closed at Rs. 114.90.