» BUKI price comeing down
by Zahara khan Yesterday at 10:36 am

» Understanding inflation and share prices.
by dayandacool Yesterday at 6:53 am

» Stocks rose across Asian Markets after China & US agree to push forward trade, investment ties
by Wickyz Yesterday at 1:51 am

» Adani's entry followed by Indian CEOs discussion with Minister ANC
by Wickyz Yesterday at 1:30 am

On Tuesday Colombo shares closed with negative returns as ASI and S&P SL 20 Index declined by 24.86 points (-0.43%) and 18.34 points (-0.58%) to end at 5,705.26 and 3,161.90 respectively. Premier blue chip John Keells Holdings recorded the top turnover of LKR 689mn with the support of two crossings totaling to 3.2mn shares at a price of LKR 210.50 per share. Further, Orient Garment with LKR 54mn and Alliance Finance with LKR 27mn were the next top contributors to the market turnover. Orient Garment, HVA foods and Touchwood Investments were mostly traded stocks for the session. Foreign participation was 39%. Foreign investors were net sellers with a net outflow of LKR 672mn.

Bourse extended losses for the third consecutive day on Wednesday as ASI marginally declined by 4.52 index points (-0.08%) to end at 5,700.74. S&P SL 20 Index closed at 3,157.38, dropped by 4.03 index points (-0.13%). Daily market turnover was LKR 700mn. John Keells Holdings with LKR 315mn, E-Channeling with LKR 161mn and Commercial Bank with LKR 65mn were the top contributors to the market turnover. Meanwhile E-Channeling, Orient Garments, Touchwood Investment and Nations Finance were the mostly traded stocks. Foreign participation for the day was 54% whereas foreign investors were net buyers with a net inflow of LKR 362mn.

Colombo Stock Exchange was closed on Thursday due to the Poya Holiday.

Colombo shares regained lost ground and posted notable gains on Friday as investors welcomed the Fed's surprise decision to keep its vast stimulus policy unchanged. The decision to maintain US stimulus policy was a great relief to the frontier markets such as Sri Lanka, which was suffering from fears of capital flight back to the developed world. All share price index gained 113.36 points (1.99%) to close at 5,814.10 and S&P SL20 gained 60.22 points (1.91%) to close at 3,217.60.

JKH emerged as the top contributor (LKR 296) for the session underpinned by negotiated deals worth of LKR 257mn. Carson Cumberbatch with LKR 102 and Commercial bank with LKR 59 were next top contributors for the day. Meanwhile, another crossing was recorded in Aitken Spence where 0.3mn shares changed hands at a price of LKR 113.30. Interestingly, the crossings accounted for only 34% of the total turnover.

Sri Lankan stocks plunged three days consecutively over the short week dragged down by price dips witnessed in some of the index heavy weights. However, bourse revived on Friday, witnessing across the board price gains, with the benchmark all share index gaining c.114 points which was a gain of 2.0%.

Market gained presumably reacting to the US Fed’s move to continue its stimulus to the USA, which in turn brought in expectation over fresh inflow of foreign capital. Further, this also built up confidence that the existing foreign investors would continue their current position. However, Colombo bourse witnessed a heavy foreign out flow of LKR 672.0mn on Tuesday, which was negated partly with inflows on Wednesday and Friday. Nevertheless, WoW recorded a net foreign out flow of LKR 251.0mn.

John Keells Holdings emerged as the top turnover contributor adding a c. LKR1.8bn (or 57.0%) to the week’s turnover tally. The counter, which witnessed crossings throughout the week within a price band of LKR 210.0-LKR 215.0 saw heavy foreign selling on Tuesday. However, it gained 4.1% WoW to end the week at LKR 218.0. Meanwhile, Echannelling witnessed a strategic deal on Wednesday when Capital Trust Holdings divested 10.46% or 12.77mn shares to Senior Marketing System Asia Private Limited ( a fully owned subsidiary of a Tokyo stock exchange listed SMS Co Ltd), which purchased 15% of E-channelling Plc in total for an average price LKR 8.47. In addition, Alliance Finance Company also witnessed a crossing of 32,400 at LKR 836.0 during the week.

Meanwhile, local Capital Market Regulator, the SEC of Sri Lanka has filed a motion in the Commercial High Court informing the steps taken by SEC in connection to Touchwood Investments over the petition on winding up that was filed by a creditor. However, the company in a stock exchange disclosure said that it had already filed an affidavit opposing the said winding up. Despite these concerns, the counter was amongst the highest traded counters during the week with a volume of 11.2mn shares being traded.

Commercial Bank and Carson Cumberbatch posted notable turnovers during the week whilst E-Channelling, Orient Garments followed by John Keells Holdings were amongst the highest volumes traded stocks during the week.

Bourse spikes on Friday as US Fed decides to stick to its stimulus measures in full scale
The Colombo bourse commenced the week on a negative note and continued its losing momentum till mid week, however rebounded on Friday supported by considerable price gains witnessed across the board. We believe the renewed interest as in the case of the world markets would have most likely been triggered by the US Fed’s decision to hold off the scaling down of stimulus measures (was announced on Wednesday). Since September last year, the US Fed has been buying USD85bn bonds every month in order to lower the long term interest rates and improve the economic growth. The cash injected via the Quantitative Easing (QE) flowed into several emerging markets and bolstered the financial markets there. Signs of economic recovery and falling unemployment rate prompted the US Fed Chairman in June to indicate that there could be a scaling down of the bond buying program later this year with a complete tapering of QE by mid 2014.

Further, the Federal Open Market Committee’s (FOMC) meeting minutes for July 2013 indicated the board’s support for the tapering of the QE. On the back of these developments and with several analysts predicting a scaling down of the QE from September 2013, several funds started to reduce their exposure to emerging markets which resulted in weakening of emerging market currencies.

However, the US Fed after its September FOMC meeting stated that it awaits for more evidence that the progress in economic development will be sustained before scaling down the stimulus measures. World markets cheered US Fed’s surprise move with US stocks hitting a record high and bond yields trending downward, whilst prices of commodities, gold and oil surged. The US Fed’s move also pushed down the USD to a seven month low against major currencies, whilst several emerging market currencies partly pared the initial depreciation that they witnessed. However, these immediate responses that emerged from world stock indices and surge in gold prices failed to sustain the momentum by the end of the week.

Meanwhile, as mentioned in our last week weekly, Monetary Board of the CBSL indicated that it will keep the monetary policy rates unchanged considering the improvement in external trade and growth in private sector credit growth in the month of July, whilst it expects the proceeds from the bond issue by the National Savings Bank to strengthen the gross official reserves. In addition, the US Fed’s decision to continue its bond buying program for at least another month is likely to result in increased net foreign inflow to the equity and bond market, whilst easing pressure on LKR’s downward movement. The monetary board further stated that the country could achieve the targeted 7.5% economic growth for 2013E, whilst the economic growth for 2Q2013 stood at 6.8% YoY expanding from 6% YoY recorded during 1Q2013.

Hence, on the back of these developments and with the US Fed continuously evaluating the possibility to scale down its QE, we continue to urge the investors to take position in counters that are trading at attractive multiples and are likely to post sustainable earnings growth.
Source: Asia Wealth Management Research

Posts : 6053
Equity Stars : 15009
Reputation : 770
Join date : 2012-02-14
The All Share Price Index on the Colombo Stock Exchange gained 113.36 points on Friday helping to close the week in positive territory with the late rally in the market resulting from improved buying interest, Acuity Stockbrokers said in a market report.

Average turnover levels – bolstered by crossings – were higher last week at Rs.0.79 billion per day, up from the previous week’s Rs.0.69 billion with crossings in JKH, Alliance Finance, E-Channeling and Aitken Spence accounting for 48.14% of last week’s total market turnover.

Acuity noted that JKH accounted for over 80% of these transactions.

Foreign investor activity however declined significantly week-on-week with inflows of Rs.490.2 million failing to offset the outflows earlier in the week with net outflows amounting to Rs.0.06 billion against the previous week’s net inflow of Rs.0.17 billion.

JKH dominated total weekly turnover value accounting for Rs.1.8 billion, over 57% of the total market turnover for the week.

John Keells Stockbrokers said in its weekly market report that the ASPI recovered from intra trading losses on Friday supported by positive investor sentiment following Fed announcement that there would be no cutback on its quantitative easing program.

Turnover levels were dominated by JKH with the market seeing foreign net outflow of Rs.250.6 million during the week due largely to selling pressure on Monday and Tuesday.
http://www.island.lk/index.php?page_cat=article-details&page=article-details&code_title=88542 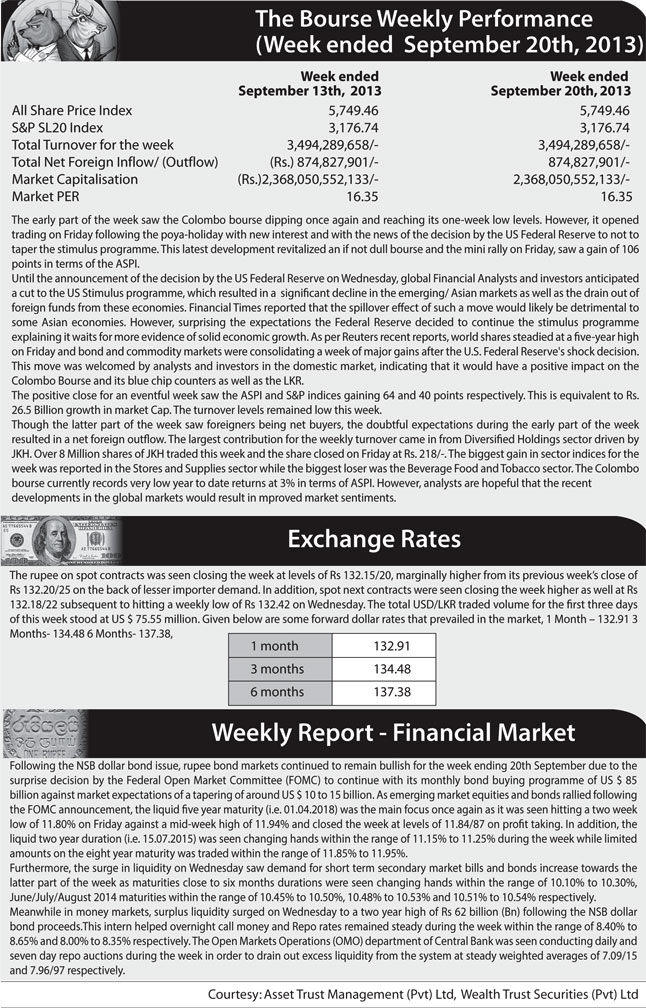