» GLAS will be winner with Super Gain.
by stocknoob Today at 6:20 pm

Colombo Stock market began the trading for the fresh week on Monday and closed in red where, index failed to maintain the momentum gained on last Friday (20th Sep) in respect of Fed’s policy decision. ASPI declined by 31.26 points (-0.54%) and S&P SL 20 Index ended declined by 11.37 points (-0.08%). Daily market turnover was LKR 486mn. HNB (LKR 84mn), Chevron Lubricants (LKR 83mn), John Keells Holdings (LKR 79mn) and Commercial Bank (LKR 46mn) were the top contributors to the market turnover. Meanwhile Dankotuwa Porcelain, PC House, John Keells and Touchwood were among the mostly traded stocks for the session.  Foreign participation for the day was 40% whereas foreign investors were net buyers with a net inflow of LKR 9mn.

Colombo Stocks closed with losses on Wednesday as ASI and S&P SL 20 Index lost 10.85 points and 8.82 points respectively. Daily market turnover was LKR 583mn. John Keells Holdings topped the turnover list with LKR 267mn. Touchwood Investments with LKR 96mn followed by Central Investment and Finance with LKR 26mn were recorded the next top turnover levels with heavy trading. Apart from that Dankotuwa Porcelain and John Keells Holdings were among the mostly traded stocks during the day. Foreign participation was 39% whilst foreign investors were net buyers with a net inflow of LKR 112mn.

On Thursday stock market closed with positive return on both indices. ASI increased marginally by 2.54 points and S&P SL 20 Index increased by 13.61 points (+0.42%). Market turnover was LKR 920mn. Sampath Bank recorded the top turnover of LKR 219mn closely followed by Touchwood Investments (LKR 204mn) and Commercial Bank (LKR 118mn). Touchwood Investment was the heavily traded stock and emerged as the top gainer for the day. Subsequent to the AGM of Touchwood Investments held on Thursday the rumors spread regarding the cash infusion to the company and the stock soared to the high of LKR 5.20 and closed at LKR 5.00, up by LKR 1.70 (+52%). Further, Central Investment & Finance and Asia Assets Finance traded heavily and ended among the top gainers. Foreign participation was 16% whilst net inflow was LKR 233mn.

Market closed the operations for the week on Friday with mixed results. ASI advanced by 22.46 points (+0.39%) and closed at 5,808.62 while S&P SL 20 Index dropped marginally by 8.79 points (-0.27%) and closed at 3,210.30. Price appreciations in LOLC group related companies such as Lanka Orix Leasing by 6.7% to close at LKR 59.00, Lanka Orix Finance by 10.7% to close at LKR 3.10 and Commercial Leasing by 5.3% to close at LKR 4.00 contributed positively to the ASI performance while price declines in John Keells Holdings by 1.8% to close at LKR 218.60, Nestle by 2.1% to close at LKR 1,949.00 and Carsons Cumberbatch by 3.5% to close at LKR 376.10 contributed negatively towards the S&P SL 20 Index performances.
Market turnover was LKR 409mn. Piramal Glass recorded the highest turnover of LKR 59mn with 11.3mn shares traded closely followed by John Keells Holdings with LKR 58mn and Commercial Bank with LKR 33mn. No off-the-floor deals were executed during the day.

During the pre-trading session CSE imposed a trading halt on Touchwood Investments.  The company announced that Mr. and Mrs. Meloney stepped down from the positions of Chairman and Vice Chairperson/CEO respectively and newly appointed Mr. Kiwlegedara resigned from the position of Acting CEO and was appointed as the Chairman.

During the week both benchmark indices closed with no significant changes but ended lower compare to the last week. Market cap decreased marginally by LKR 3bn. Total net foreign inflow to the equity market was LKR 688mn while the foreign participation was 30% of the total weekly turnover. Meanwhile year-to-date net foreign inflow stood at LKR 19.3bn. Individual investors were relatively active throughout the week in the backdrop of several events in some counters, mainly Touchwood Investments. The speculation helped the Touchwood share price to gain 182% during the last five days and closed the week as the top gainer followed by CIFL (+75%WoW). The increased participation drove the average daily trading volume to 68mn, an increase of 106%WoW.

The bourse failed to sustain the sharp gains accrued last Friday after the US Fed’s surprise move to extend the QE as counters across the board lost ground. However, several small cap stocks including speculative stocks such as Touchwood, Central Investments and Finance and PC House advanced heavily towards the latter part of the week. Accumulation continued on Touchwood which witnessed its price soar more than 190% during the week after the hype created subsequent to an announcement regarding change in directorate, amidst pending Court cases, SEC investigation and concerns over corporate governance. Meanwhile, the CSE imposed a trading halt on Touchwood on Friday over a pending disclosure from the company regarding media reports. Despite these small counters rallying on speculation and dominating the market activities in terms of turnover and volume, foreign investors became net buyers during the week from net sellers during last week, focusing on blue chip counters including selected banking sector counters. Perhaps, US Fed’s decision to hold off the scaling down of stimulus measure would have partly resulted in foreign investors retaining and taking positions in Sri Lankan market.

Meanwhile, the IMF released a statement during the week indicating that it has revised the country’s economic growth forecast up for 2013E to 6.5% from 6.3%, however it continues to be below the CBSL’s forecast of 7.5%.

Conclusion: Looming US Fed’s decision to impact local equity market?
Indices were on a roller-coaster ride during the week, whilst retail investor interest was skewed more towards small cap counters. In addition, institutional and foreign interest was fixed on few index heavy weights, amongst which the Banking and Finance sector reported few notable transactions.

Meanwhile the week ended with foreigners becoming net buyers, which could in turn persuade the local investor community to build up confidence on the local market.

However, sustainability of such confidence also relies on positive macro-economic factors locally as well as globally. The IMF recently stated that the country should keep the policy rates on hold and to make structural changes such as tariff reforms, improve local business climate and enhance revenue collection in order to support capital expenditure to boost growth in the country. IMF also revised the estimated economic growth rate up for 2013E to 6.5% from 6.3%, which is relatively lower than that of the Central Bank’s target rate of 7.5%. Further, IMF also indicated that the possible scaling down of the US Fed’s monetary stimulus in the coming months could bring about a slowdown/reversal of inflows, since foreign investors tend to pull out money from the emerging markets in fear under these circumstances.

On the back of these developments, we continue to advise investors to take positions in fundamentally strong stocks, trading at attractive multiples to minimize risk from high volatility.
Source: Asia wealth Management Research 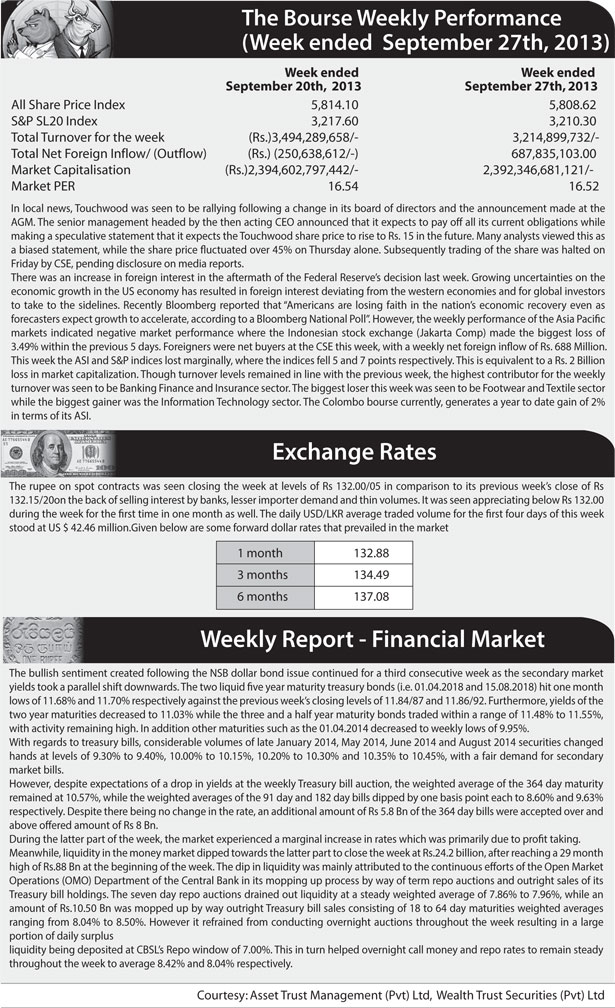