The annual average inflation, which is a lagging indicator averaging across 24 months also fell to 7.8 percent from 8.0 percent.

The sub-index for food without alcoholic beverages and cigarettes fell 0.5 percent during the month and non foods fell 0.1 percent.

Sri Lanka's credit growth is slower than last year though state spending and borrowing is still high and the central bank is expecting inflation to be around these levels this year.

The International Monetary Fund has said monetary policy should not be relaxed further this year, until the effects of earlier easing is seen.
http://www.lankabusinessonline.com/news/sri-lanka-inflation-up-6.2-percent-in-september/122000413 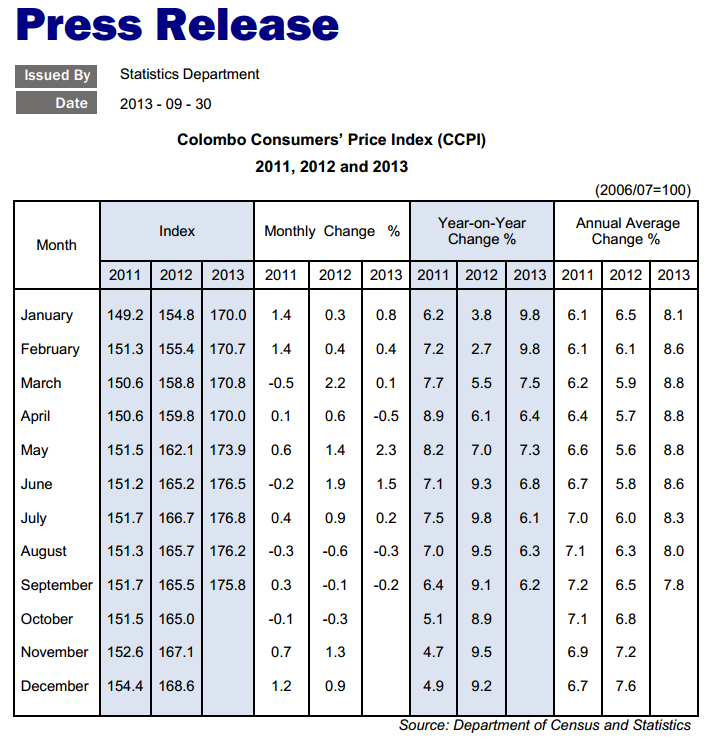 The annual average inflation rate also decreased further to 7.8% in September 2013 from 8.0% in the previous month, for the fourth consecutive month. 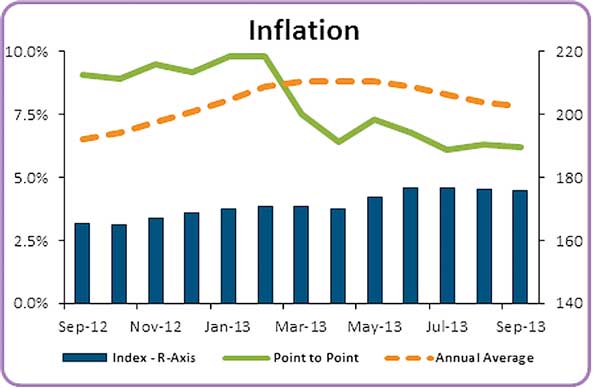 The CCPI decreased by 0.2% in September 2013 over the previous month, with the Index decreasing in absolute terms to 175.8 from 176.2 in August 2013. The contribution to the monthly decrease in the Index came mainly from price decreases (by 0.5%) in the Food and Non Alcoholic Beverages sub-category.

Within the Food category, the prices of almost all varieties of rice, vegetables, fresh fish, dried fish, chicken, potatoes, green chillies and big onions decreased during the month.However, an increase in the prices of some varieties of fruits, coconuts, infant milk powder, eggs, red onions and limes was reported.

Within the Non-Food category, decrease in prices was reported in the sub-category of Clothing and Footwear (by 0.3%).

However, the prices in the sub-categories of Housing, Water, Electricity, Gas and Other Fuels (by 0.1%); Furnishing, Household Equipment and Routine Household Maintenance (by 0.1%); Health (by 0.2%); Transport (by 0.1%); Recreation and Culture (by 1.0%) and Miscellaneous Goods and Services (by 0.1%) increased.

Meanwhile, the prices in the sub categories of Communication and Education remained unchanged during the month.
http://www.ft.lk/2013/10/01/inflation-declines-in-september-led-by-low-food-prices-cb/

Posts : 128
Equity Stars : 3395
Reputation : 19
Join date : 2012-12-11
The Central Bank keeps boasting about these low inflation numbers. However I feel the inflation numbers are low because of lack of demand.

This is especially true (I feel) in categories such as- Furnishing, Household Equipment and Routine Household Maintenance (by 0.1%); Health (by 0.2%); Transport (by 0.1%); Recreation and Culture (by 1.0%) and Miscellaneous Goods and Services (by 0.1%)

Once demand picks up they will pass on these cost escalations leading to a increase in prices and consequently a jump in inflation.

This has been my observation over several cycles.