Sri Lankan stocks which portrayed a lethargic performance at the beginning of the week, progressively gathered momentum towards mid-week to end on a WoW gain. The week witnessed several mid-sized crossings that enhanced the daily turnovers, whilst small cap penny counters boosted the daily volumes. Institutional, high net worth and foreign interest over the week was prominent on sectors such as the Banking and Finance, Diversified, Telecommunication, Information Technology and Beverage, Food and Tobacco, of which diversified John Keells Holdings spearheaded week’s turnover adding c.29% to the week’s tally.

Renewed interest on Dialog Axiata was witnessed on Wednesday that featured a crossing of 25.6mn shares at LKR 8.80. In addition, Sampath Bank, Nations Trust Bank and Commercial Bank from the Banking Sector along with E-Channeling, Nestle Lanka, Lanka IOC and Serandib Hotels witnessed few crossings during the week. Daily average turnover for the week amounted to c. LKR 962.0mn against LKR 643.0mn recorded during the previous week.

Meanwhile, Touchwood Investments despite the pending court case and concerns over corporate governance issues extended its speculative run during this week with a total volume of c.121.0mn shares being traded with a mix of retail and high net worth interest. In addition, retail buying was witnessed on both voting and non-voting shares of Blue Diamonds (which also emerged amongst the highest traded counters during the week), Amana Takaful and Central Investments and Finance. The week recorded a total share volume of 416.0mn against 340.0mn recorded in the previous week, which is a 22.0% WoW gain.


Conclusion: The US budget impasse and concerns over debt ceiling creates bewilderment amongst global investors
The bourse commenced the week’s activities on a negative note, however it gradually gathered points throughout the week supported by price gains witnessed in several small cap counters and selected large cap counters. Foreign participation persisted at the bourse supported by several crossings and large transactions amidst strengthening rupee and the country’s strong economic growth outlook as confirmed by the IMF and ADB. In view of that, the IMF revised the GDP forecast up for 2013E to 6.5% from 6.3%, whilst ADB retained its April projection of 6.8% and brought down the inflation estimate to 7% from 7.5%, despite revising down the region’s growth to 4.7% from 5.7%.

Meanwhile, world stock markets which were indifferent immediately after the US budget impasse and partial shutdown of the US government, slumped towards the latter part of the week on concerns that the inability to increase the US government’s debt ceiling could lead to a full scale default by the US government. Further, according to Goldman Sachs a partial shutdown of the US government could trim as much as 0.2% from GDP each week the government is closed. On top of this, the IMF indicated the necessity to raise the debt ceiling which also echoed by the US Treasury. According to US treasury, the US will run out of money to repay debts between Oct 22-October 31 if there is no raise in debt ceiling and a debt default could lead to a financial crisis as bad as 2008 or worse. It further noted that a possible failure to raise the debt ceiling could not only lead to a default on debt repayments but may also trigger shattering effects on the financial markets, private job creation, consumer spending and economic growth. These developments also could have ripple effects across the globe.

This budgetary gridlock now into its fourth consecutive day generated uncertainty and fear amongst the global investor community as to whether the recovery witnessed in the US economy would stall. However, if the time of spending freeze remains short, the impact in the US and global economy should be insignificant.
Asia Wealth management Research
Full Report -
http://research.srilankaequity.com/t838-04-10-2013-weekly-review-asia-wealth-management-co-ltd

Colombo share market closed under red shine on Tuesday where benchmark ASI dipped by 22.49 points (-
0.39%) and S&P SL 20 Index fell by 3.48 points (-0.11%). Market turnover was LKR 1.3bn. Sampath Bank
was the highest contributor to the market performances with LKR 559mn followed by John Keells Holdings
with LKR 225mn and E-Channeling with LKR 164mn. Touchwood Investments continued to end as the
heavily traded stock but among the top loser of the day with 37% drop in share price following the
resignation of MP deleted Silva who was appointed as non-executive independent Director to Touchwood
Board w.e.f last Monday (23 Sep). Further Amana Takaful, Central Investment & Finance and John Keells
Holdings were among the mostly traded stocks during the day. Foreign participation accounted for 19% of
the total market activity while recording a net inflow of LKR 390mn.

Colombo bourse swung back to the positive side on Wednesday. ASI advanced by 24.79 points (+0.43%) and S&P SL 20 Index advanced by 12.00 points (0.37%). Market turnover was LKR 1.3bn. John Keells Holdings with LKR 786mn, Dialog Axiata with LKR 227mn and Touchwood Investments with LKR 94mn emerged as the highest contributors to the daily market turnover. Touchwood Investments continued to attract heavy retail investor interest during the day. Since the provisional allotment date of JKH rights (attached with warrants) due on Wednesday the share gained relatively high interest among investors. Further, renewed investor attention was seen in Colombo city hotel stocks such as Hotel Services and Cinnamon Lakeside.

Foreign participation was 37% whilst net inflow was 79mn.

Touchwood investments continued to be the mostly traded stock for the fifth consecutive day followed by
Blue Diamond and PC House Holdings.

Foreign investors were net sellers with a net outflow of LKR 28mn. Foreign participation was 16% for the
day. Net foreign outflows were seen in Access engineering, Tokyo cement and HNB, whilst foreign inflow
were seen in John Keells Holdings. However, during the week market managed to exceed the LKR 20bn mark of foreign inflows for the year. Cash map was 54%.

Further, based on the application made on behalf of Touchwood Investments, court granted the company till 14th October to file its formal objections to the application to appoint a provisional liquidator. Moreover, court directed the company to submit its proposal for repayment of the monies owed to the creditors by the above mentioned date. Touchwood closed at LKR 4.30, down by 4.4%.

Meanwhile, the first US government shutdown in 17 years, making 800,000 federal employees work as
lawmakers wrangle over the budget for the new financial year, which started on 01st October. The US dollar headed for a third weekly decline against Asian currency and during past month USD depreciated by approx. 1.3% against the local currency. 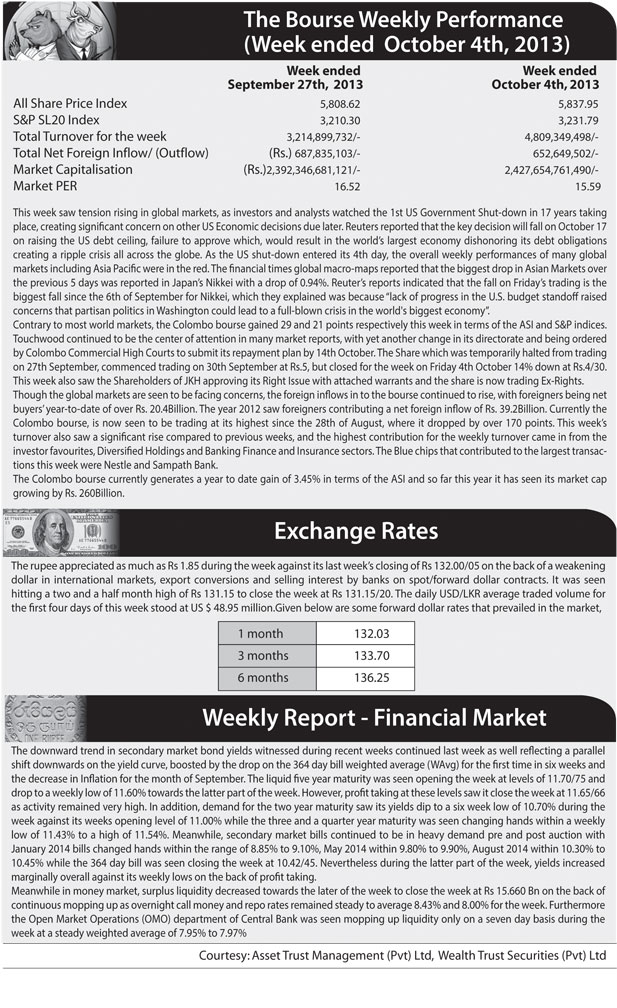