Market was closed on Wednesday due to Eid festival.

On Tuesday Central Bank of Sri Lanka reduced policy rates corridor by 50 basis points lowering its repo rate to 6.50% and reverse repo rate to 8.50% to boost credit. Going forward this may reduce the market interest rates gradually, which may draw back the investors to the stock market. Currently CSE is trading at a PE of 12.0x, which is 2.4% discount to the MSCI frontier market index PE and 20% discount to the MSCI frontier emerging market index PE.

Majority of the Sri Lankan stocks ended the week in green with the bench mark ASI witnessing marginal gains, whilst activity levels remained low due to two days of holidays. Retail participation was concentrated on few small cap counters, whilst institutional, high net worth and foreign participation was evident on selected blue chip counters including banking sector counters, bringing a net foreign inflow of c. LKR680 during the week, whilst the YTD net foreign inflow surpassed the LKR22bn mark. Meanwhile, John Keells Holdings’ rights commenced its trading on Tuesday and commanded heavy foreign and local participation, whilst the ordinary voting share also continued to be amongst the hot picks by institutional and foreign investors.

Further, the Monetary board of the CBSL made a 50bps cut in monetary policy rates despite the IMF insisting on structural reforms to boost economic activities rather than relaxing monetary policies. However, we expect the reduction in market interest rates to be favorable towards the corporate earnings and the equity trading activities. Meanwhile, world stock markets cheered the debt ceiling deal as the US law makers approved legislation that would end the US government‟s partial shutdown and raise the debt ceiling. However, concerns over this short term deal remain high as it would fund the US government until 15 January 2014 and suspend the debt limit until 7 February 2014. Hence, analysts continue to fear that the default threat could reemerge in February 2014 as the US Treasury department approaches its extended borrowing
limit.

Further, Sampath Bank made an announcement during the week regarding debenture issue of LKR25mn at LKR100 with an option to issue up to further LKR25mn in the event of over subscription, whilst it is subject to the necessary regulatory approvals.

Conclusion: The drop in August credit would have triggered the policy rate cut…

Central Bank brought down the policy rates by 50 basis points during the week lowering the repo rate to 6.5% and reverse repo rate to 8.5% indicating the bank‟s commitment to raise the volume of investments and real growth in the economy. The marginal drop in loans and advances of the banking sector in August would have caused the Central Bank to cut rates so sharply despite the approximately USD 1.5 billion interest payments on external debt scheduled for the year for both private and public borrowings, which could exert pressure on external financing.

According to the data released by the CBSL to the banking sector, the month of August saw loan disbursements by the banking sector contract by LKR 7.8 billion compared to LKR 73.5 billion increase in July while the deposits and borrowings increased 1% MoM and 5.8% MoM respectively.

On account of these changes the banking sector loans and advances contracted 0.2% MoM in August compared to the 2.2% increase in July.

The drop in loans and advances of the banking sector in August this year was not witnessed since the contraction in 2009. This also indicates that the asset structure of the banking sector is shifting towards government securities from credit to private sector. The deceleration of the credit growth coupled with the increase in deposits under the current interest rate regime would have prompted the monetary authority to cut policy rates significantly. In this light we expect the reduction in interest rates to increase the attractiveness of equity securities and support the equity trading activities at the Colombo Bourse. Thus, we continue to urge investors to take positions in fundamentally sound counters trading at attractive price levels.
Source: Asia Wealth Management Research
To read full report -
http://research.srilankaequity.com/t841-17-10-2013-weekly-review-asia-wealth-management-co-ltd#957 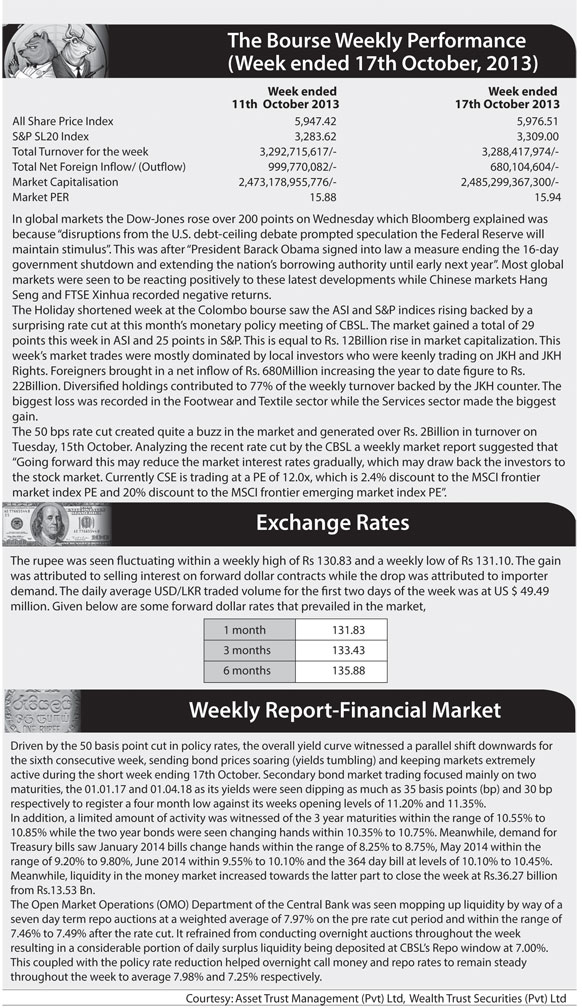