The bench mark index trended down during the first three days of the week, however it managed to gain momentum towards the end of the week. Turnover and volume levels were high during first two days lifted by crossings and a mix of foreign, high net worth and institutional interest on selected counters, whilst activities slowed down during mid week.

However, 4 crossings totaling to over 6.9mn shares witnessed on National Development Bank on Friday boded well for the day’s turnover to cross LKR1.4bn, whilst WoW foreign participation remained flat during the week. Despite the average daily turnover during the week being notably high cf. 12 month average daily turnover, it dipped 17.7% WoW to LKR901.7mn, whilst the average daily volume during the week rose 126.9% WoW to 40.5mn. Meanwhile, John Keells Holdings-rights that commenced trading on Tuesday last week ended its trading during this week on Thursday with approx.26m rights being traded (c.20% of total issued qty) during this period. Rights opened the trading at LKR40.0 and reached its all time high of LKR72.0 yesterday despite witnessing much volatility during trading days. Further, investor interest was centered on Union Bank towards the latter part of the week following a disclosure made by the bank regarding a foreign institution expressing their interest in investing in Union Bank. However, the bank in its announcement indicated that no firm offer has been made yet.

Moreover, Fitch Ratings raised concerns over Sri Lanka’s increasing reliance on foreign borrowings which in turn could result in currency risks for borrowers who may not have forex revenues. It further indicated that the country has been able to raise only a net FDI averaging 1.2% of GDP since the war ended in 2009, which fueled the state foreign borrowings.

According to Fitch, state foreign debt burden is currently 57% of GDP, which is much higher than the all other Asian emerging markets except for Mongolia.

Despite the Central Bank of Sri Lanka (CBSL) slashing policy rates by 50bps last week, the Colombo bourse failed to show a positive reaction spontaneously as it was on a losing streak for 3 consecutive days during the week.

However, the bourse regained on its 4th day of trading to end the week on a positive note partly paring the initial losses, to end the week on WoW dip of 0.5%. This could be possibly due to investors being watchful ahead of the release of 3QCY2013 financial results.

Expansionary policies adopted by the CBSL has so far brought down policy rates by 100bps in total for 2013 (125bps since November 2012), whilst the country has managed to maintain the inflation at single digit throughout 2013, with the inflation for September 2013 being at 6.2% (MoM dip of 0.2%). Fitch during a revisit on the country’s economy has commented that the expansionary monetary policies coupled with relatively lower levels of inflation could support the country’s economic growth momentum, with Fitch expecting a growth of 6.0% for 2013E and 6.6% for 2014E. Thereby, on the back of these developments we expect the possible downward trend in the interest rates to improve corporate performance from 1CY2014. Whilst lower interest rates could improve the bottom lines of corporates, it could also enable companies to go forward with expansions, which have been relatively curtailed due to high cost of financing.

In addition, we expect the banking sector, which has been witnessing a marked slowdown in private sector credit growth to witness a revival. Finally, the possible drop in market rates is also likely to improve the attractiveness of equity investment cf. to fixed income securities and improve equity trading activities.
Source: Asia Wealth Management Research
To read the entire report - http://research.srilankaequity.com/t844-25-10-2013-weekly-review-asia-wealth-management-co-ltd#962 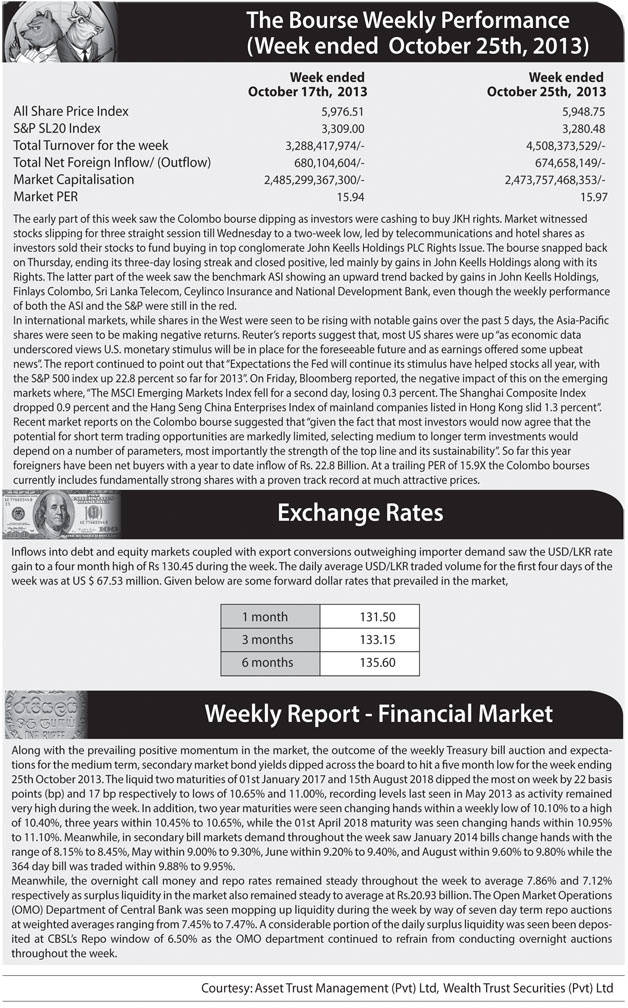 On Tuesday Colombo stock market extended losses weighed down by several blue-chips. ASI fell by 21.43 points (-0.36%) while S&P SL 20 Index declined by 14.95 points (-0.45%). Daily market turnover was LKR 983mn. John Keells Holdings (LKR 213.00, -0.5%) was the highest contributor to the turnover with LKR 238mn and traded heavily throughout the day. Further, Distilleries and Commercial Bank recorded the next top turnover levels of LKR 193mn and LKR 140mn with the support of negotiated deals. John Keells Holdings – Rights, Touchwood Investments and Union Bank were the mostly traded stocks during the day. Foreign participation accounted for 39% of the total market activity and posted a net inflow of LKR 227mn.

On Thursday stock market snapped three-day losing streak and closed in positive led mainly by gains in John Keells Holdings along with its Rights. On its renunciation day, John Keells Holdings – Rights advanced by hefty 40.9% due to heavy investor interest. ASI advanced by 35.50 points (+0.60%) and S&P SL 20 Index gained marginally by 4.58 points (+0.14%). Daily market turnover was LKR 517mn. Union Bank, the mostly traded stock made the highest contribution to the turnover with LKR 126mn. The announcement made by the bank regarding possible interest from global institutional investor in making an investment in the bank enhanced the retail investor interest toward the stock. Further, John Keells Holdings – Rights) and Dialog Axiata made the next best turnover levels of LKR 91mn and LKR 52mn respectively. Touchwood Investments, Agstar Fertilizer and HVA Foods were also among the frequently traded stocks. Foreign participation for the day was 14% whilst recording a net inflow of LKR 22mn.

Market closed the weekly operations on Friday in positive territory as ASI closed at 5,948.75, up by 12.35 points (+0.21%) and S&P SL 20 Index closed at 3,280.48, up by 16.72 points (+0.51%). Market turnover reached LKR 1.5mn. National Development Bank emerged as the top contributor to the market turnover with LKR 1.1bn with the support of several negotiated deals executed off-the board totaling to ~7.0mn shares at a price of LKR 153.00 per share. Further heavily traded Union Bank and John Keells Holdings recorded the next highest turnover levels of LKR 124mn and LKR 23mn respectively during the day.

Touchwood Investments, Orient Garments and PCH Holdings were among the heavily traded stocks for the day. Foreign participation in the equity market is relatively low and it accounted for only 3% of the total market activity and foreign investors were net buyers whilst recorded a marginal net inflow of LKR 12mn. Net inflows were seen in stocks such as John Keells Holdings (LKR 16mn), Aitken Spence (LKR 10mn) and Central Finance (LKR 2mn). Cash map closed at 46%.
- See more at: http://www.nation.lk/edition/business/item/22244-weekly-market-focus.html#sthash.CfqihQnN.dpuf