I have always been curious to know about all the investments Warren Buffett made in his career.

Here’s my attempt to provide a timeline of how Buffett evolved into what he is today.

Buffett started selling Juicy Fruit chewing gum packs. When asked for 1 piece, he would not sell as he thought he may be left with 4 pieces he could not sell. He made 2 cents profit per pack.

Buffett would also purchase Coca-Cola six packs for 25 cents from his grandfather’s grocery store – Buffett and Son. He would sell each Coke for 5 cents. Profit of 5 cents per pack.

At 11 years old, Buffett buys his first stock – 6 shares of Cities Service (now known as CITGO – an Oil company) at $38 per share. He bought 3 for himself and 3 for his sister Doris.

That is all the money he had at that time. Practiced little to no diversification at a young age which he continued to do throughout his investment career. The stock price fell to $27 but soon went to $40. He sold the stock at $40, but, the stock shot up to $202 in the next few years.

He later cited this experience as an early lesson in patience in investing.

Buffett files his first tax return and deducts his bike as a work expense for $35.

Buffett joins his friend Donald Danly to start a company called Wilson Coin Operated Machines. The business buys a pinball machine at a cost of $25 and places it in a nearby barber shop. Wilson Coin makes $50 per week for Buffett and Donald.

Buffett does tax returns for himself and Wilson Coin. In next few months they own 3 machines and a year later sells it for $1200.

Buffett returned to Omaha, purchased a Texaco station, but did not go well. He was also working as an investment salesman for Buffett-Falk & Company, at his father’s brokerage firm.

In 1954, Benjamin Graham called him again and offered him a job for $12,000 a year. During this period, Buffett was able to also work closely with Walter Schloss.

Buffett returned to Omaha and on May 1, created Buffett Associates Ltd. Seven family members and friends invest a total of $105k. Buffett invested only $100k.

Buffett created more partnerships and was managing a total of 5 partnerships, all from his home.

Buffett and Munger Best Friends Forever
Buffett was introduced to Charlie Munger by his friend Edwin Davis at a dinner. Charlie Munger later becomes the Vice Chairman of Berkshire Hathaway.

The partnerships are worth a few million and Buffett made his first million dollar investment in Dempster – a windmill manufacturing company.

Sanborn Map Company accounted for 35% of the partnerships’ assets. He explained to the partners that in 1958 Sanborn was selling at $45 per share when the value of its investment portfolio itself was at $65 per share which meant that it was undervalued by $20 per share with a map business coming in for nothing.

Buffett reveals that he earned a spot on the board of Sanborn.

Buffett goes to New York to meet his old acquaintances to include more partners and raise capital. He collects a few hundreds of thousand dollars. Buffett partnerships is worth $7.2 million. Buffett then merges all partnerships into one and rename it as Buffett Partnerships Ltd.

Munger introduces Buffett to Harry Bottle, CEO of Dempster,  who cut costs, laid off workers, and turned around Dempster to generate cash. At this time, Buffett notices Berkshire Hathaway selling for $8 a share and starts buying aggressively.

Buffett aggressively purchases Berkshire paying $14.86 per share while the company had working capital of $19 per share. This did not include the value of fixed assets. Buffett partnership becomes a single largest shareholder of Berkshire Hathaway.

American Express is victim to the salad oil scandal and shares fall to $35. Buffett saw the value and bought 5% of the company.

Buffett invests $4 million in Walt Disney after a meeting with Walt Disney himself which is almost 5% of the company. Buffett takes full control of Berkshire Hathaway and names Ken Chase to be the CEO.

Buffett closes the partnership to new money. Buffett writes in his letter that “unless it appears that circumstances have changed (under some conditions added capital would improve results) or unless new partners can bring some asset to the partnership other than simply capital, I intend to admit no additional partners to BPL.”

Buffett invests in Hochschild, Kohn which was a department store in Baltimore.

Buffett’s personal investment in the partnership is now approximately $6.8 million.

He also briefly considered leaving investing to pursue other interests.

Partnership is worth $104 million.

Warren has three recommendations to partners.

The Buffett Partnership is completely dissolved and divested of its assets.

Berkshire starts buying stocks in the Washington Post company (Publishing). Buffett becomes close friends with Katharine Graham who controlled the company and its flagship newspaper and becomes a member of the board of directors.

Due to falling stock prices, the value of Berkshire Hathaway portfolio begins to fall. Warren’s personal network falls by more than 50%.

Buffett merges Berkshire and Diversified – the firm controlled by Munger.

Munger gets 2% stock of Berkshire and becomes its vice chairman.

Berkshire invests $4 million in GEICO (Insurance) when its stock price was just above $2. Buffett continually invests in GEICO until 1996, when Berkshire acquires the company.

Buffalo Evening News is the only local newspaper of Buffalo and its name is changed to Buffalo News.

The newspaper earns $19 million in its first year without competition. By the late eighties, the Buffalo News is earning $40 million a year.

Berkshire merges with Blue Chip Stamps which was a majority owned subsidiary of Berkshire.

Berkshire portfolio is worth $1.3 billion.

Warren’s personal net worth has ballooned to $620 million and he makes the Forbes millionaire list for the first time.

The stock market crashes in October and Berkshire loses 25% of its value.

Buffett starts buying Coca-Cola (Beverages) and eventually gains a 7% stake in the company for $1.2 billion.

Berkshire acquires Borsheim’s (Jewelry) from the Friedman Family. Berkshire’s stock price rises from $4,800 to $8,000 per share.

Berkshire acquires Dextor (Footwear) which turns out to be a bad investment.

The Warren Buffett Way by Robert G. Hagstrom Jr. is published and becomes a bestseller.

Berkshire Hathaway’s annual meeting is so well attended that it is held in Omaha’s Holiday Convention Center for the first time. Berkshire stock crosses $25,000 per share.

Buffett invested 2% of his investment portfolio in silver.

Buffett makes a huge investment in US Airways (Airlines) which turns out to be a bad investment decision.

Buffett is named the top money manager of the 20th century in a survey by the Carson Group, ahead of Peter Lynch and John Templeton.

The acquisitions and purchases continue to increase.

Buffett apologizes to his shareholders for failing to foresee the risk and properly price insurance coverage.

Buffett enters a deal where $11 billion worth of forward contracts is delivered in US dollars against other currencies. By April 2006, his total gain on these contracts is over $2 billion.

Berkshire acquires McLane (wholesale distributor), Clayton Homes (housing) and Burlington Industries, one of the world’s most diversified marketers and manufacturers of soft goods for apparel and interior furnishings.

Bill Gates is elected as a director for Berkshire Hathaway.

Despite insurance business losses of about $2.5 billion caused by Hurricane Katrina, Berkshire records a gain of $5.6 billion.

Buffett announces in June that he will give away more than 80%, or about $37 billion, of his $44 billion fortune to five foundations in annual gifts of stock, starting July 2006. The largest contribution will go to the Bill and Melinda Gates Foundation.

In a letter to shareholders, Buffett announces that he is looking for a young successor or perhaps successors to run Berkshire.

Buffett had previously selected Lou Simpson, who manages the investment via GEICO, to fill that role. However, Simpson is only six years younger than Buffett.

The companies bought that year include

Berkshire buys $4.4b in bonds from Mars Inc (food and beverage). Makes $680m in profit off the investment.

A $5 billion “paper” loss on investments and derivatives triggers a first-quarter loss for Berkshire. It is the biggest loss since the 9/11 terrorist attack. But earnings rebound later in the year.

Berkshire invests in Munich Re (Insurance). 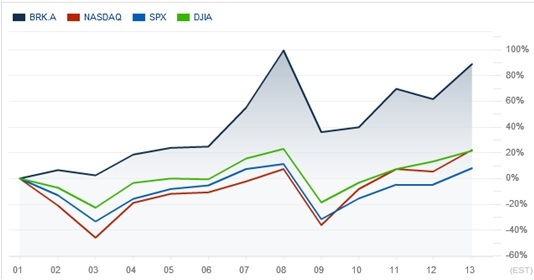 As Berkshire continues to accumulate more cash, it’s capital spending will increase and you will no doubt see big deals occur going forward.

Buffett has one of the most illustrious investing careers the world has ever seen.

The story is not over yet.
Source:
This is a guest post by Balaji.G, author of Investing007.
http://www.oldschoolvalue.com/blog/investing-perspective/warren-buffett-career-timeline-investments/

Those insurance acquisitions are what helped. Buffet once said if I just bought insurers instead of Berkshire I would be richer

Keep it up your good works...

@seek wrote:How about DP's profile? I heard he started from 500 Rs.

Those who missed the story follow the below link.
http://forum.srilankaequity.com/t5732-story-of-dhammika-perera#38695