Market continued to end in positive territory on Thursday making 2.6% return on main index for the month of October. ASI moved up by 20.21 points while S&P SL 20 Index improved by 16.25 points to end at 3,282.07. Daily market turnover was LKR 633mn.  John Keells Holdings was the top contributor to the market turnover with LKR 179mn followed by Chevron Lubricants (LKR 86mn) and Lion Brewery (LKR 36mn). Further, Touchwood Investments, Lanka Century Investments and Textured Jersey were traded heavily during the day. Foreign participation for the day was 40% of the total market activity and net foreign buying was LKR 121mn.

Daily market turnover was LKR 1.1bn. Lanka Tiles was the main contributor to the daily turnover with an amount of LKR 582mn where a total of ~6.5mn shares changed hands as 12 crossings at a price of LKR 80.00 per share. As per the disclosure made to the CSE, 5.1mn shares of TILE were sold by related parties of Dr.S.Selliah. Moreover Ceylinco Insurance (LKR 43mn) and John Keells Holdings (LKR 38mn) recorded the next best turnover levels during the day. Further a total of ~0.6mn shares of John Keells Holdings changed hands at LKR 225.00 per share.

Retail investors were actively participated in today’s trading in most of the small cap stocks such as Dankotuwa Porcelain, Ceylon & Foreign Trades, Softlogic Finance and Blue Diamonds which were traded heavily and closed with notable gains.

The Colombo bourse displayed bearish sentiments during the first two days of trading then picked up gradually towards mid-week, and lost ground to end on a negative note or rather falt. Market witnessed several crossings on few index heavy weight counters with the support of foreign, institutional and high net worth interest. Dialog Axiata which has been grabbing foreign interest over the recent past witnessed a crossing where over 54.0mn shares changed hands at LKR 9.0.

This in turn has increased the company‟s foreign holding to c. 92.0%, where sellers were local parties, of which Browns Investments Plc was a prominent party that has sold c.41.0mn shares. In addition, other counters that witnessed crossings over the week were Commercial Bank, John Keells Holdings, Chevron Lanka Lubricants, The Lion Brewery on Ceylon, People’s Leasing & Finance and Lanka Tiles, which believed to have had partial foreign participation that brought in a net foreign inflow of LKR 446.6mn during the week, pushing the YTD net foreign inflow to LKR 23.7bn.

However, this week‟s net inflow was 34% lower cf. to the previous week.

Despite the large scale transaction witnessed over the week total turnover tally was a 21.0% WoW dip whilst, volumes traded advanced c.49.0% WoW. Lanka Tiles posted the highest turnover for the week of LKR 582.0mn that was boosted by the 12 crossings that were witnessed on Friday where c.6.5mn shares changed hands at LKR 80.0. In addition, Dialog Axiata, John Keells Holdings, Commercial Bank etc. were amongst the other counters that recorded sizable turnovers during the week.

Meanwhile amongst the highest traded counters during the week were Dialog Axiata, PC House, PCH Holdings and Touchwood Investments. In addition, “GREG” famed Environmental Resources Investments Plc announced the CSE of its company name change to Lanka Century Investments Plc, whilst the share price ended the week with a 11.4% WoW gain. Meanwhile, Touchwood Investments stated that the company will adhere to the repayment scheme set out by the statement of objections, which was agreed by the parties present at the court hearing.


Conclusion: Inflows to the CSE and Rising Tea Prices Strengthens the LKR despite Depreciation Pressure

The Colombo bourse ended the week with a WoW gain recording few large scale transactions on selected blue chips that involved foreign participation, bringing a net inflow of LKR 446.6 million during the week. This brought the CSE‟s YTD net inflows towards the LKR 24 billion mark demarcating the confidence level of foreign investors on the local market which in turn could build up confidence of local investors.

Foreign inflows to the CSE coupled with the sharp increase in the price of tea assisted the LKR to hold ground against the depreciation pressure triggered by importer dollar demand. The favourable world market prices for tea assisted the LKR to remain fairly stable while at the same time turning the tables for the tea industry that was facing massive financial difficulties due to wage hikes and other uncontrollable factors. The drop in output during last year due to dry weather conditions is more than compensated by the sharp increase in output this year due to favourable rainfall. On the other hand price of a kilogram of tea also increased circa 40% YoY assisting the financial position of the sector as well as the balance of payments position of the economy and the strength of the LKR. The LKR however, ended a tad weaker over seasonal demand for imports closing at LKR 130.85 per USD.

Nevertheless, the relative strength of the LKR managed to hold inflation in October at reasonable levels. Inflation picked up in October to 6.7% from 6.2% in September triggered by a 7.6% rise in food prices during the month.

The non-food prices remained unchanged largely assisted by the stability of the LKR during the month. As the festive season in December is around the corner the importers tend to accumulate inventories for consumer goods, causing the LKR to marginally fall in value against the USD. 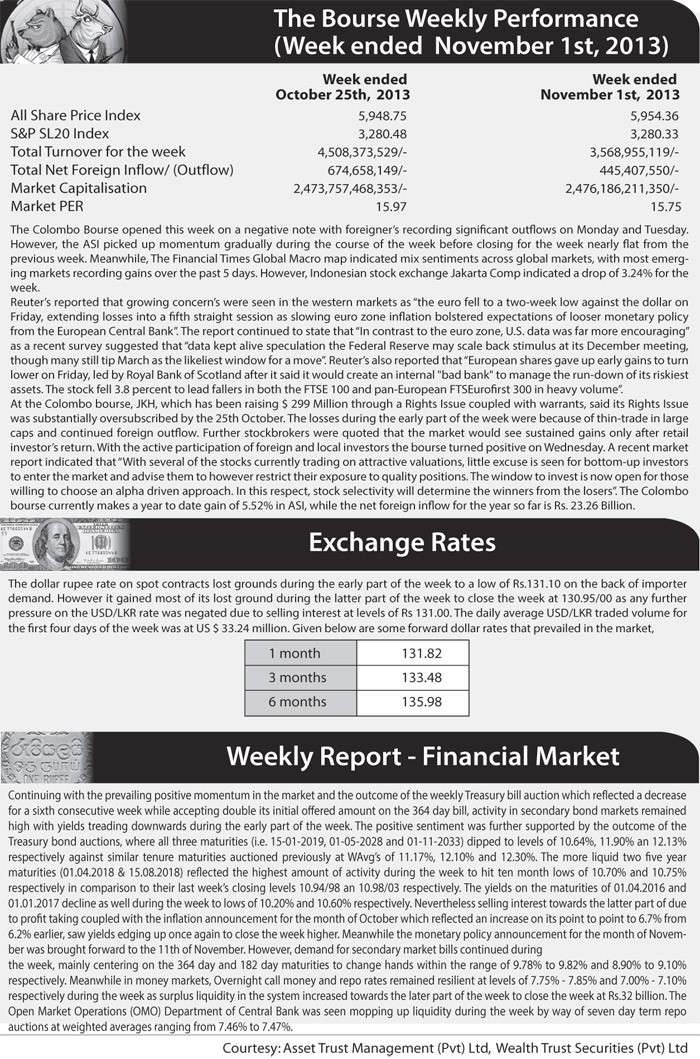 Lanka Tiles was the highest contributor to this week's total turnover value accounting for 16.31% (or LKR 582.06mn) of total market turnover.

The Manufacturing sector was the highest contributor to the week's total turnover value, accounting for 27.69% (or LKR 988.21bn) of the market. Sector turnover was driven primarily by Lanka Tiles which accounted for 58.90% of the sector's total contribution. The Diversified sector dominated the market in terms of share volume, accounting for 20.14% (or 60.59mn shares) of total share volume, with a value of LKR 581.44mn.

The sector's volume accounted for 1.48% of total turnover value.

Morisons [NV] and Dankotuwa Porcelain were also amongst the week's top price gainers with W-o-W gains of 14.71% and 12.23%, respectively.

Indices too were flat this week, with the ASPI continuing to consolidate around the psychological 6000 barrier. Markets have been moving sideways around this point (ie: between 5900 and 5982) for the past three weeks. Foreign investors meanwhile, were net buyers - albeit lower W-o-W - as significant buying into DIAL and JKH helped offset net outflows at the start of the week. Activity levels in the week ahead are likely to remain unchanged, with institutional and high net-worth investors likely to dominate markets.

Just over 10% of corporates have reported earnings so far for the quarter ending September 2013 and approximately 43% of these have shown a Y-o-Y growth in earnings. The Manufacturing sector, in particular, has recorded significant Y-o-Y gains in earnings last quarter while the Plantation and Hotels & Travels sectors have recorded Y-o-Y declines in earnings. On the macro front meanwhile, inflation in October edged up 6.7% Y-o-Y relative to 6.2% Y-o-Y in September 2013.

The increase was mainly due to price increases in the Food and Non-Alcoholic Beverages sub-category. Annual average inflation however, continued to trend lower, declining to 7.6% Y-o-Y in October (c.f. 7.8% Y-o-Y in September).