Colombo bourse extended losing streak for a fifth straight session with ASPI dropping 35.71 points or 0.60%. S&P SL 20 Index declined by 11.18 points or 0.34%. Market turnover reached LKR 688mn supported by several negotiated deals recorded in Ceylon Tobacco, Nestle Lanka and Expo Lanka Holdings. Accordingly those three stocks emerged as the top contributors to the daily turnover with the values of LKR 235mn, LKR 181mn and LKR 44mn respectively. Meanwhile active investor participation was seen in stocks such as Touchwood Investments, The Century Investments and Expo Lanka Holdings. Foreign participation accounted for 67% and at the end of the day foreign investors were net buyers with a marginal total net outflow of LKR 2mn.

Market turnover LKR 1.6bn, the highest recorded during the week. Off-board transactions made in Asian Hotels & Properties (16.8mn share at LKR 68.00 per share) and CT Holdings (1.8mn shares at LKR 150.00 per share) added 86% to the day’s turnover whereas these two stocks recorded the top turnover levels of LKR 1.2bn and LKR 292mn respectively. Further Expo Lanka Holdings recorded the next best turnover of LKR 26mn during the day and closed at a new 52 week high of LKR 7.60 (+2.7%).

Foreign participation for the day was 46% and foreign investors were net sellers with a net outflow of LKR 874mn. Net foreign selling was seen in shares such as Asian Hotels & Properties (LKR 1.2bn), Commercial Bank (LKR 13mn) and Vallibel One (LKR 11mn).

The Colombo bourse experienced a bearish run throughout the week dragging the ASI down drastically possibly due to the lost enthusiasm by investors over damped financial results released by companies. However market witnessed few large crossings on few large cap counters which heavily contributed towards the week‟s total turnover tally. United Motors Lanka that witnessed a crossing on Wednesday at LKR108 increased it‟s foreign holdings by c.2.4mn shares. Asian Hotels and Properties which emerged as the highest turnover contributor for the week with over LKR1.17bn (c.33.1% contribution to the week‟s turnover) witnessed four crossings during the last day of trading which took place at LKR68.

The transaction is believed to have involved foreign participation where foreign investors were on the selling side.

Meanwhile amongst the highest traded counters during the week were PCH Holdings, Asian Hotels and Properties , Expo Lanka Holdings and PC House. Further counters such as Hemas Holdings, ODEL, Ceylon Tobacco and John Keells Holdings made announcement regarding an interim dividend payment. Meanwhile during the week Aitken Spence announced of a USD100mn project to build a resort in Ahungala partnering with RIU Hotels Spain spearheading the first business model around the Southern Highway and Mattala Airport which attracted retail interest.

The week saw foreign purchases amounting to LKR1,351.0mn whilst foreign sales amounted to LKR 1,923.0mn. Market capitalisation stood at LKR 2,435.0bn and the YTD performance is 3.8%.

Conclusion: Favorable macro-economic factors yet to be reflected in corporate earnings

Sri Lankan stocks tumbled as the bear ruled the market throughout the week, where daily turnovers and volumes were trimmed down, whilst few crossings pushed up the activity levels. Investors became pessimistic or rather cautious over the weak financial performance that has been presented by several companies so far for 3CY2013.

Despite counters such as Nestle Lanka, Tokyo Cement, Textured Jersey, Access Engineering, Hayles etc. posting YoY growth in earnings, many companies have witnessed glitches in their recent financials as negative market conditions such as high cost of energy, depreciation of the rupee and slower than expected global economic recovery remained as challenges. Therefore, despite the expansionary monetary policies adopted by the CBSL (slashing policy rates expecting private sector growth) and well managed inflation level, corporate earnings has not
yet reflected these developments.

However, with the present downward trend in market interest rates, upcoming holiday season and large-scale development projects undertaken by some of the listed conglomerates along with the recovery expected in the global economic arena (which remains as a challenge to the local economy), we expect the corporate earnings to rebound in the short- medium term and improve the medium-long term prospects of the equity market.
To read the entire report - http://research.srilankaequity.com/t850-08-11-2013-weekly-review-asia-wealth-management-co-ltd#968 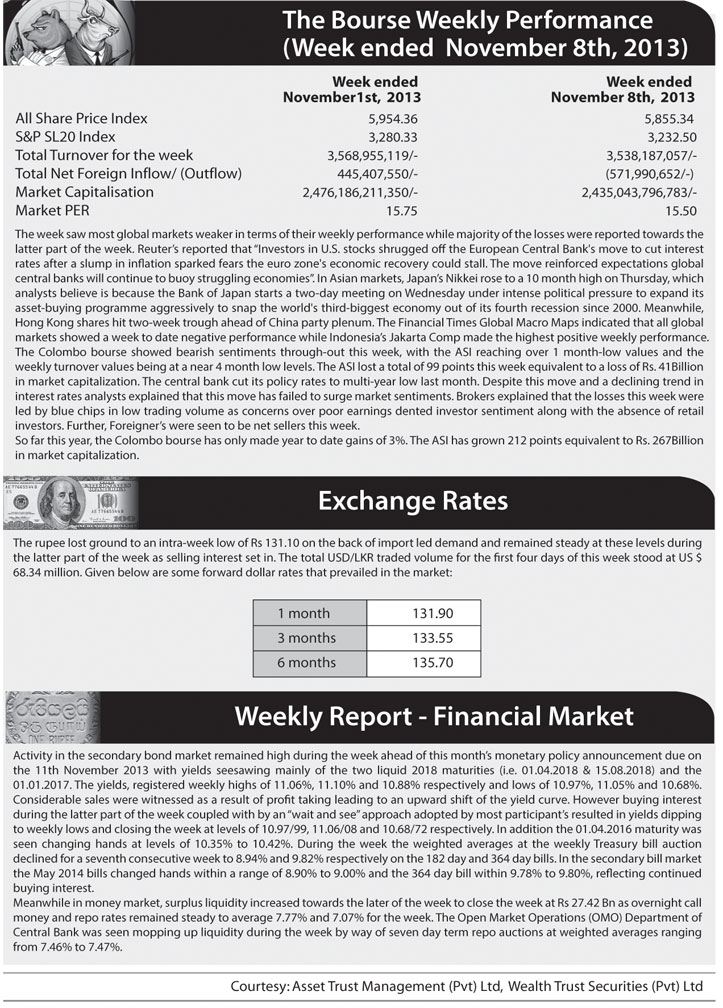