» FINANCE AND LEASING SECTOR
by Mohammed020 Yesterday at 6:20 am 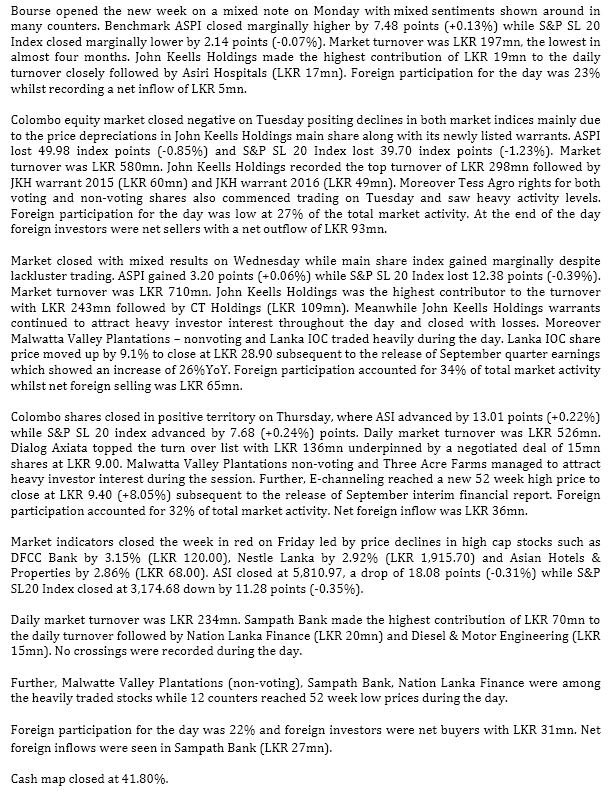 Overall activities at the Colombo bourse demonstrated a lackluster performance throughout the week, but imperceptibly gathered momentum towards mid-week but lost grounds to close with a WoW loss. Activities remained sluggish as investors were cautious over the weak interim results reported by several companies so far. However the week witnessed few crossings and few block transactions on the normal board which contributed towards daily turnover, where institutional and high net worth interest was prominent on sectors such as Diversified, Telecommunication and Bank Finance and Insurance. John Keells Holdings emerged as the week’s top turnover contributor adding c. 25.7% to the week’s total turnover, while John Keells Holdings warrants (W0022 and W0023) which began trading on Tuesday together added c.
12.2% to the week’s turnover.

Dialog Axiata that featured a crossing of 15mn shares at LKR9.00 emerged with the highest volume for the week with a cumulative 15.9mn shares. In addition, counters such as John Keells Holdings, Ceylon Theaters, Asiri Hospitals and Ceylon Guardian Investment Trust also witnessed crossings during the week. However, despite large transactions daily average turnover for the week dipped to c. LKR 449.5mn cf. LKR 707.6mn recorded during the previous week.

Further Tess Agro ( R0000) and Tess Agro (R0001) which began trading this week captured c. 20.0% of the week’s trade volume followed by PC House Holdings, Touchwood Investments and Asiri Hospital Holdings that recorded considerable volumes during the week. However the week recorded a total share volume of 131.1mn against 147.2mn recorded in the previous week, which is a 10.9% WoW dip.

Meanwhile, the Census and Statistics Department of Sri Lanka declared that the GDP expanded 7.8% YoY in 3QCY13, (which has been the highest quarterly growth since the first quarter of 2012) whilst it was 6.8% during 2QCY13. However, CBSL is predicting a minimum of 7.2% growth for 2013, which is down by an earlier forecast of 7.5%, whilst anticipating a growth between 7.2%-7.3% for the 4th quarter of 2013, to be led by the construction and tourism sector.

Moreover, the CBSL has further announced that the External sector made a satisfactory progress in September 2013 whilst the trade deficit continued to narrow during the 9 months of 2013. During the nine months of 2013, earnings from exports increased by 0.3%, while expenditure on imports continued to decline by 0.9% from the previous period of 2012, where all major sectors contributed towards the export earnings growth in September 2013. Meanwhile, sturdy growth reported in textiles and garments exports (both to the EU and the USA) in September also reflects the recovery taking place in those economies, which is a positive aspect towards our local economy. Therefore, with the CBSL further easing the monetary policy in October 2013, coupled with the above-mentioned retrievals, we anticipate further growth in the local economy, which in turn could improve the corporate earnings going forward, along with a rebound in the equity market.
To read the entire report -http://research.srilankaequity.com/t852-15-11-2013-weekly-review-asia-wealth-management-co-ltd#970 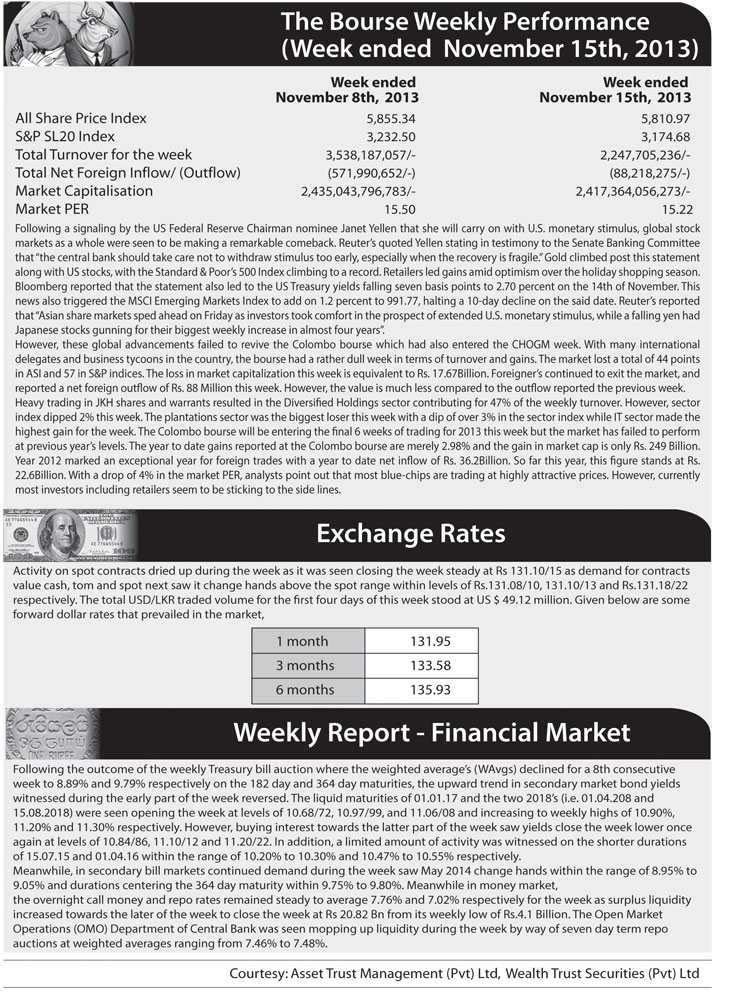