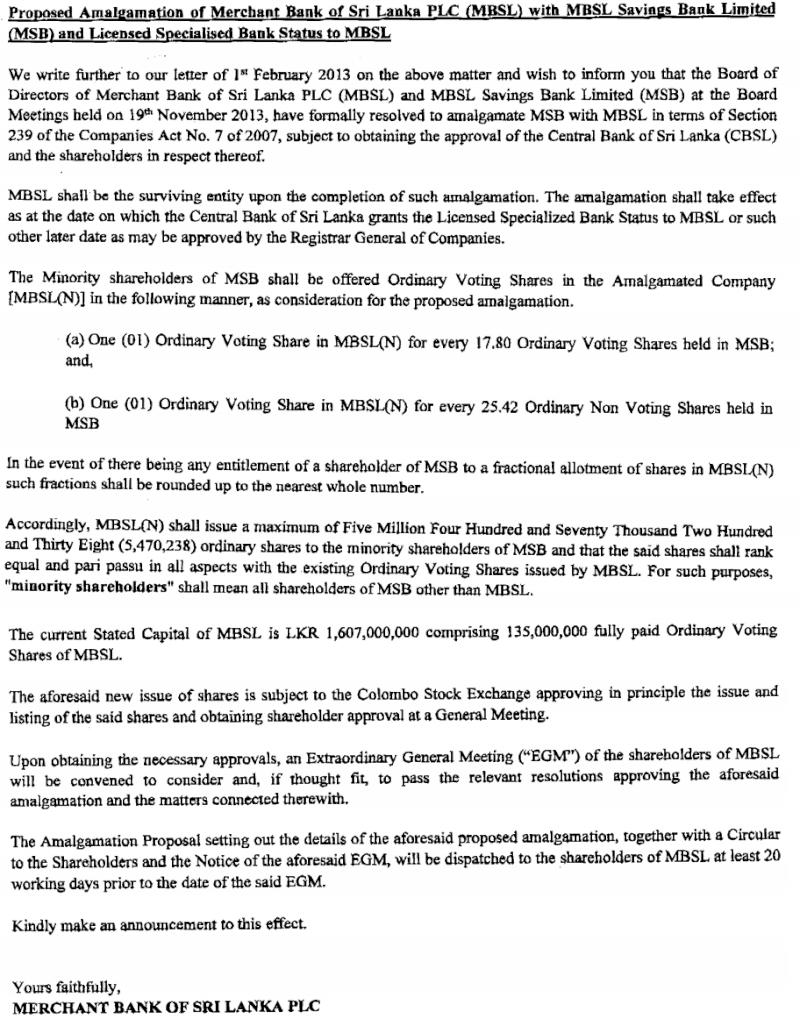 Employees from 62 MBSL branches islandwide are to join the march, which will commence at 9.30 am, reports add.

On Nov. 21, a protest demonstration was held near the Slave Island MBSL Bank. Protestors cited that there is an attempt to sell the main shares of the bank and that the move keenly affected its employees.

The MBSL, which is a subsidiary of Bank of Ceylon is proposed to be merged with the MBSL Savings Bank and reopened as a specialized, licensed bank, chairman of both institutions, M.R. Shah has said earlier.

Noting this move was approved at a Director Board meeting on Nov. 19, Mr. Shah had also revealed that the Central Bank approval is being sought to reopen the institution as a specialized, licensed bank.

It is said that the Director Board has also approved the move for MBSL to issue 5,467,238 new shares to MBSL Savings shareholders after the merge.

However, it is said that the employees of the two institutions will not face jobcuts due to this impending merger and the taskforce of MBSL savings, (which is around 100) would be attached to the MBSL, reports say.

The Bank of Ceylon owns over 72% of the MBSL, which is expanded business in several areas including leasing, finance, investment banking and insurance.

This is said to be the first privately owned savings bank in the country.

Charging that the recent propositions have been brought forward by Mr. Shah, employees further add that Managing Director of MBSL insurance – Sydney Gajanayaka was sent on indefinite leave after protesting against these propositions.

Speaking on the basis of anonymity, a high ranking official of the bank said that all these proposals were a conspiracy of a figure nicknamed ‘economy killer’.
http://srilankamirror.lk/news/11945-mbsl-employees-oppose-shah-s-proposals

Posts : 677
Equity Stars : 4437
Reputation : 28
Join date : 2011-04-14
Location : Kotte
Speaking on the basis of anonymity, a high ranking official of the bank said that all these proposals were a conspiracy of a figure nicknamed ‘economy killer’.

DG someone you know ?

Are we right or wrong only person who said it knows.

hmm... Maybe there are multiple economy killers in Sri Lanka.

@Backstage wrote:Speaking on the basis of anonymity, a high ranking official of the bank said that all these proposals were a conspiracy of a figure nicknamed ‘economy killer’.

DG someone you know ?

He had to thus resign as the director board did not comply with his decisions.

The director board of the company has gathered yesterday (28) at Sri Lanka Foundation and the directors including Sydney Gajanayake , who was placed on compulsory leave, has suggested the Director Sashika Senarath to the post of Chairman.

The resigned former director of MBSL and the current Chairman of Sri Lanka Foundation Prof. Ranjith Bandara has also been appointed as a director, reports say.

However, Shah has resigned only from the post of Chairman of the MBSL Insurance and expects to continue his tenure as the Chairman of the Sri Lanka Merchant Bank (MBSL).

Shah's resignation was caused by the duel took place at the President’s House to hold him in the position and to remove.

It was previously reported about an attempt to appoint a close acquaintance of Gamini Senarath, Sashika Senarath to the post of Chairman of the MBSL Insurance.

Finally, the new proposal of the P.B's party has been making a request through Ceylon Bank Employees Union (CBEU) forcing the government to remove all remaining directors of the MBSL and an appoint a new administration in order to develop the company.

Shah's resignation letter is as follows:

55/D/4,
Ranmuthugala,
Kadawatha.
27th November, 2013.
The Board of Directors,
MBSL Insurance Co. Ltd.,
122, Kew Road,
Colombo 2.
Dears Sirs,
Review of Board Decision of Managing Director's Compulsory Leave and Resignation as Chairman/Director
I note with concern that some of the Directors of the MBSL Insurance Co. Ltd. have unlawfully, with insufficient notice, convened a meeting of the Board of Directors to be held at the Sri Lanka Foundation on 28th November, 2013, at 9.00 am, at which it is also proposed to review the decision placing the Managing Director and CFO on compulsory leave.

I also note that this meeting has been convened bypassing the Company Secretaries, in order to wrongfully accommodate Prof. Ranjith Bandara, who is no longer a director of the Company, since the Parent, Merchant Bank of Sri Lanka (PLC) has already nominated another director in his place consequent to his resignation from the MBSL, which was formally approved by the IBSL and the Form 20 has been duly filed with the Registrar of Companies. It is clear that this move has been initiated in order to wrongfully secure the majority on the Board.
The Company Secretaries have very categorically informed all directors that they were unable to convene any board meeting until legal advise sought for Prof. Ranjith Bandara's claim as a director. In this situation, I understand that the Company Secretaries too are resigning as Secretaries since they do not wish to compromise professionalism.

The Managing Director was placed on compulsory leave on a unanimous decision of the Board on 20th November, 2013, in order to facilitate an independent investigation by the Price Waterhouse Coopers to be carried out, into the irregularities in the commission payments reported by the Internal Audit investigations together with the IBSL's observation about irregularities in connection with Foreign Employment Agency insurance scheme and seeking explanation from the Board of Directors on non disclosure of related party transaction with regard to Lanka Corrugated Industries (PVT) Ltd. and furnishing inaccurate information in annual returns etc, by letter dated 7th November, 2013.

While inviting attention to the proposal made by some of the directors to lift the compulsory leave of the Managing Director and CFO at the meeting on 25th November, I reiterate that any attempt at this point of time to lift the compulsory leave would certainly not facilitate the independence of the investigations and in the eyes of the public, it could be perceived as endorsing corruption.

While I do not endorse or promote malpractices and corruption in any form and in that context, do not wish to be a party as well, to a resolution to review the original decision to place the Managing Director and the CFO on compulsory leave, since it could cause serious reputational risk not only to the Board of Directors of MBSL Insurance but also to the Merchant bank of Sri Lanka as the major shareholder, its subsidiaries and me as well.