» Renuka Agri Products
by dayandacool Today at 11:34 am

» Clarification on fertilizer ban relaxation
by Bakkabwoi Today at 9:49 am

» CABO -- “ The Investment Company ” under Land & Building Sector
by samaritan Today at 9:44 am

» TAP and Greg from Tomorrow
by Value Pick Today at 9:18 am

» GRAN/TAFL/BFL
by samaritan Yesterday at 2:20 pm 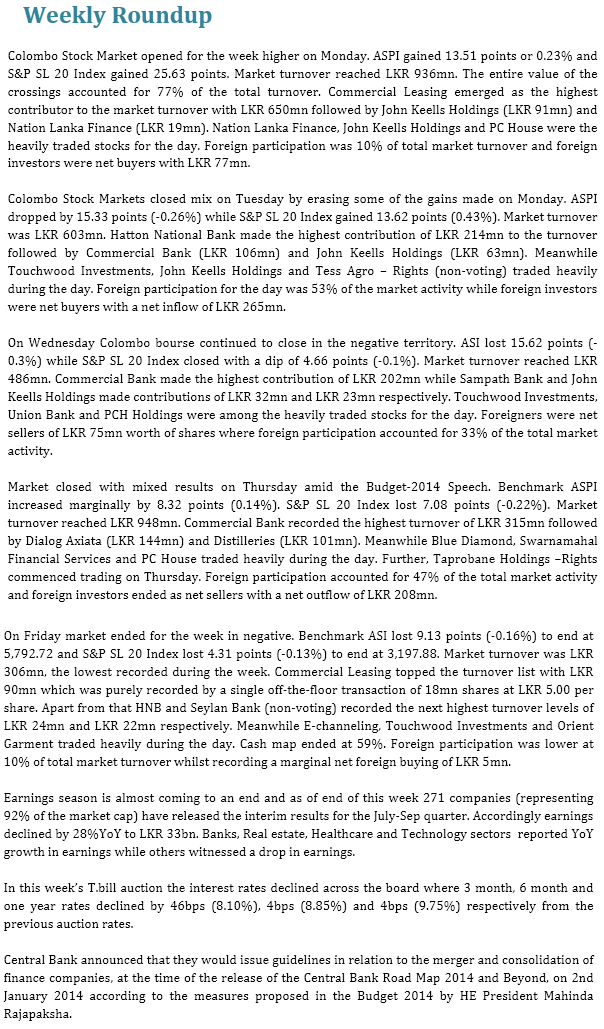 The overall performance of the stock market remained stagnant during the week whilst several crossing were witnessed over the week. The budget presented on Thursday lured mixed sentiment as investors remained prudent, observing the potential policy revisions. However the week witnessed few large scale transactions and retail participation, whilst institutional and high net worth interest was prominent in Bank Finance and Insurance sector. Commercial Leasing and Finance emerged as the week’s top turnover contributor adding c. 22.5% to the week’s total turnover mainly driven by crossings witnessed on Monday and Friday.

Commercial leasing and Finance that featured a crossing of 130mn shares at LKR5.0 on Monday emerged as the highest volume traded stock for the week with a cumulative 148.0mn shares being traded over the week. In addition, counters such as Commercial Bank of Ceylon, Hatton National Bank, John Keells Holding and Sampath Bank also witnessed crossings during the week. On the bak of these large trades daily average turnover for the week increased to c. LKR 656.2mn against LKR 449.5mn recorded during the previous week.

Meanwhile Finalys Colombo announced its first interim dividend of LKR1.0 per share for 2013, whilst Commercial Development announced an interim dividend of LKR2.0 per share for 2013. In addition CSE approved the listing of normal shares of Amana Bank on the Diri Savi board. Retail investors pursued counters such as Touchwood Investments, PC House Holding and PC House. However the week recorded a total share volume of 297.5mn against 131.1mn recorded in the previous week, which is a 126.9% WoW gain.

During the week IMF commended Sri Lanka for managing the inflation, economic growth and stable exchange rate however it continues to maintain the economic growth forecast for 2013E at 6.5% YoY which is below the Central Banks forecast of 7.7%YoY. However IMF warned that Sri Lanka could face high interest rates on USD denominated borrowings in the event US Federal Reserve restricts its stimulus.

The week saw foreign purchases amounting to LKR1,076.0mn whilst foreign sales amounted to LKR1,018.0mn. Market capitalisation stood at LKR 2,409.7bn and the YTD performance is 2.7%.

Conclusion: Investors Adopt a Cautious Approach During the Budget Week

Despite daily turnovers and volumes during the week depicting a mild recovery WoW, overall market sentiments remained dreary, possibly due to investors adopting a wait and see approach prior to the presentation of the 2014 budget and thereafter taking time to weigh the pros and cons of the 2014 budget.

With the unveiling of the “Budget 2014”, many new regulations and policies were introduced that would most likely bring about novel expectations and approaches on the corporate array. As opposed to the 2013 fiscal agenda, higher taxes via import duty, Cess, NBT, and VAT were introduced to increase the tax base and improve the government’s revenue. This is likely to impact sectors such as Banking and Finance, Beverage Food and Tobacco, Automobile, Land and Property, Chemical and Pharmaceuticals, Healthcare. Telecommunication
etc.

Moreover, it is also worthy to keep track on foreign investor perception and reactions on the above fiscal proposals introduced as foreign participation so far has played a pivotal role in the local equity market, especially in sectors such as Banking and Finance, Diversified, Beverage, Food and Tobacco, Telecommunication etc. Thereby, the expectation of a possible slowdown in these sectors could result in reduction in exposure on the above segments in favour of sectors that are likely to outperform.

However, on the positive side, in order to encourage new listings, improve market liquidity and improve market activity levels, the government has extended the time frame to list by a further three years to obtain a 50% tax exemption for new listings with a minimum of 20% public shareholding and who pay a 28% corporate tax.
To read the entire report -http://research.srilankaequity.com/t855-22-11-2013-weekly-review-asia-wealth-management-co-ltd#973

Posts : 2577
Equity Stars : 7936
Reputation : 115
Join date : 2011-04-08
It will take a couple of weeks for investors to get clarified on salient points of concessions, tax cuts & increases, merging of financial institutions etc..from authorized administrators. Meanwhile, on going rumors of price hikes striking to gas,fuel & other needy consumable items would be another dose for napping stock market.

The Banking & Finance sector dominated the market in terms of share volume too, accounting for 59.78% (or 177.88mn shares) of total share volume, with a value of LKR 2.12bn. The Diversified sector followed suit as 34.22mn shares (or 11.50%), amounting to LKR 368.20mn were traded. The Land & Property sector meanwhile, contributed 5.51% to the week’s total turnover volume as 18.69mn shares changed hands. The sector’s volume accounted for LKR 81.89mn of total turnover value.

Budget 2014 appears development-oriented in nature with a major focus on SMEs and social development. The Budget aims at achieving a GDP growth of 7.5% - 8% during 2014-2016, while simultaneously targeting a budget deficit of 5.2% of GDP in 2014 and 4.5% in 2015. Although significantly less than in the previous budget, this year too incentives have been provided for the development of capital markets. Proposals include a 50% tax holiday (for 3 years) for all Banking, Finance, Insurance and Manufacturing companies (which are liable to profit tax & 28%) which list on the CSE in 2014. 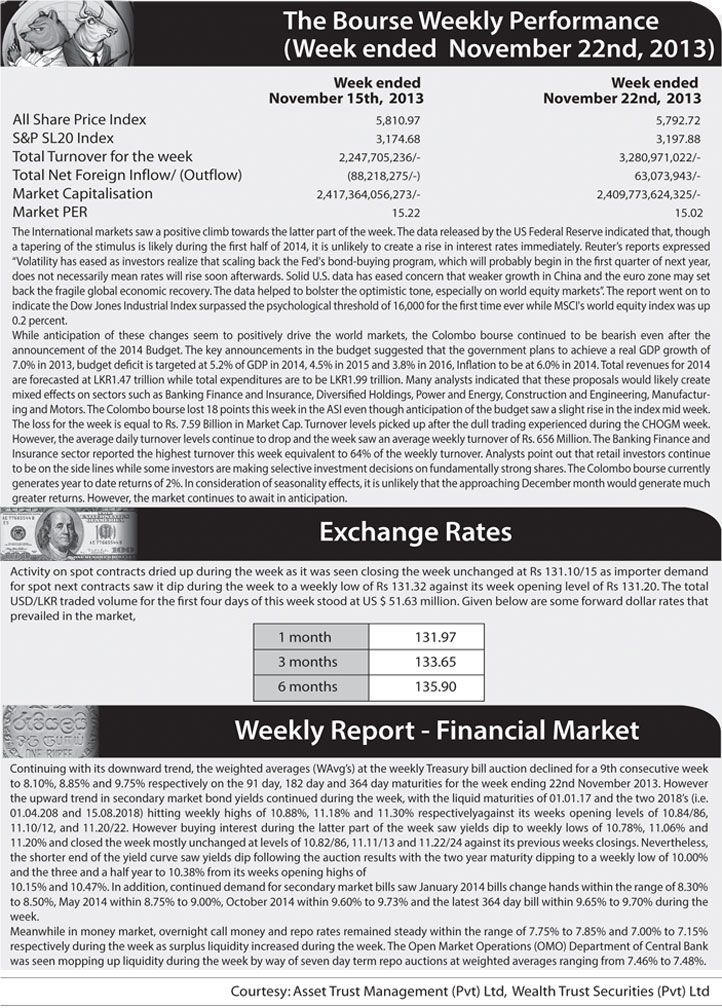