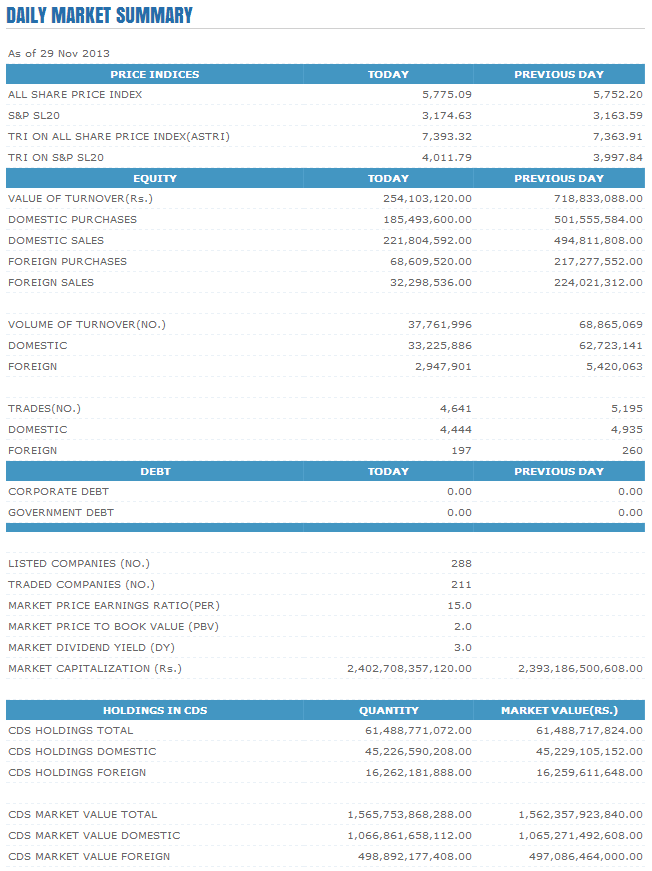 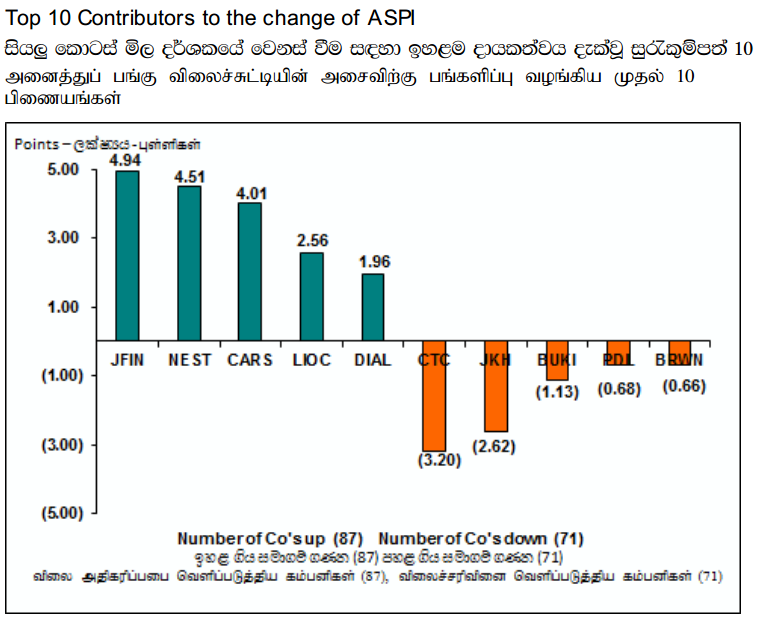 There were no crossings yesterday. LIOC gained Rs.2.30 to close at Rs.32.60 on over 0.8 million shares transacted to lead the floor trades, contributing Rs.27 million to turnover. Brokers said that retailers were among those trading in this stock which recorded a low of Rs.30.80 and a high of Rs.33 - a one-year high for the counter.

Commercial Bank followed gaining a rupee to close at Rs.116 on nearly 0.2 million shares done between Rs.115 and Rs.116.40 contributing Rs.20.5 million to turnover. Brokers saw some foreign buying interest in this stock which contributed Rs.20.5 million to yesterday’s turnover.

Interest in Dialog continued with the counter closing 10 cents up at Rs.9 on nearly 1.3 million shares contributing Rs.11.6 million to turnover.

HNB announced an interim dividend for 2013 of Rs.1.50 per share (voting and non-voting), XD from Dec. 9 and with payment on Dec. 13.
http://www.island.lk/index.php?page_cat=article-details&page=article-details&code_title=93037

Posts : 2577
Equity Stars : 7829
Reputation : 115
Join date : 2011-04-08
Market's slow pace, with recent frequent dipping & occasional upward trend but marginally, reflects the investors preference to stick with other financial instruments that earn higher returns with lower risk. Positive macro economic indicators published so far have not supported or are not strong enough, to push up trading floor activities due to so called "confidence & sentiments". Unfortunately no applications are implemented to overcome such long debating topic which has become a square peg in the well. Also, investment concept of mid to long term, is not understood yet by many, resulting quick, paltry gain within the least time period. Whatever the combinations of investors nature, at the end of the day, everything rests on simple economic theory of demand & supply rotating in the vicious cycle.

Posts : 801
Equity Stars : 4670
Reputation : 27
Join date : 2011-08-19
When momentum is killed artificially turnover will fall low that happened.And when it's rebuilding again it starts with the low turnover.Let's see next week.

In such a scenario it should give a boost to the stock market. However the contrary appeared to be happening, with the bourse recording its tenth lowest turnover figure for the year to date, with a sum of Rs. 254.1 million at Friday’s trading.

This follows the market making its second lowest turnover for the year to date with a figure of Rs. 193.48 million on Monday.

The fortunes of market indices are intrinsically connected with the movement of the value of the bourse’s market capitalization.

Reasons
Meanwhile, the reasons behind the “bear” run of the bourse are many, the most obvious and the most recent being poor performances of listed companies for the quarter ended September 30, 2013.

Meanwhile, the bourse, making a dismal follow up to making its second lowest turnover for the year to date with a sum of Rs. 193.5 million at Monday’s (November 25) trading, fell for the fourth consecutive day on Wednesday, dogged by poor quarterly earnings for the quarter ended September 30, 2013; whilst also suffering a NFO for the third consecutive day, this time a sum of Rs. 46.37 million, though for the year to date having had enjoyed a Rs. 22.6 billion net foreign inflow (NFI).

The seeming lowering of interest rates, usually an attraction to the bourse, has however not taken off, vis-à-vis giving a boost to the stock market.

Adding to the bourse’s woes are the recent price hikes of essential commodities in the immediate aftermath of the previous week’s budget presentation by gazette notification, further denting retail consumer spending power, already buffeted by a 50% increase in electricity rates.

Meanwhile the lowest turnover the bourse has recorded for the year to date is a sum of Rs. 191.7 million on July 12, while the third lowest: Rs. 197.44 million on November 11.

When market capitalization increases, the value of the ASPI in particular increases.

Nevertheless the bourse suffered an NFO for the fourth consecutive day, with an NFO figure of Rs. 6.74 million at Thursday’s trading, however, in the year to date, the bourse has had experienced a NFI of Rs. 22.6 billion.  Thursday’s turnover was boosted by foreign to foreign transfers on Aitken Spence and local to local transfers on E Channelling which contributed to nearly 50% of the day’s turnover.