Sri Lankan stocks plummeted during the first three days during the week, picked up marginally on Thursday to end the week on a positive trajectory despite the indices losing on a WoW basis. Activity levels dried up over the week recording low daily turnovers whilst the cumulative turnover for the week declined c.24.5% WoW. Meanwhile, foreign participation witnessed an out flow of LKR 66.6mn, whilst market capitalization also dipped 0.3% WoW losing c.LKR 7.06bn in value from the previous week.

Despite this sluggishness, institutional and high net worth participation remained prominent over the week, which triggered several crossings and few block transactions on the normal board. Commercial Leasing and Finance that witnessed few crossings at LKR 5.0 emerged as the top turnover contributor recording LKR 485.0mn which is a c.20.0% contribution. In addition, the counter, also traded a cumulative volume of over 97.0mn shares during the week which is the second highest volume traded stock during week. Moreover, Dialog Axiata, CT land and Development, John Keells Holdings and E-Channeling also were amongst the other counters that witnessed crossings during the week. Further, during the week, E-Channeling witnessed its second largest shareholder JB Cocoshell (Pvt) Ltd exiting from its ownership.

Meanwhile, rights of Taprobane Holdings recorded the highest volume of 114.0mn for the week, whilst E-Channeling, Dialog Axiata, PCH Holdings also recorded a considerable share volume during the week. In addition, Piramal Glass Ceylon disclosed the sale of its balance portion of the Ratmalana land to Ideal Motors (Pvt) Ltd was concluded on 29.11.2013, whilst Vallibel Power Erathna, Hatton National Bank and The Lanka Hospitals made dividends announcements during the week.

Conclusion: How the Market Interprets 2014 Budget Proposals
The 2014 budget proposals have been received with a mixed note by the investment community mainly on the back of concern on rise in taxes on key consumer goods and the increase in corporate tax on selected sectors coupled with a relaxation of the tax exemptions provided for businesses. Despite the not so vibrant approach of the market towards the 2014 fiscal agenda the increase in consumer and corporate taxes and the relaxation of tax exemptions were however aimed at strengthening the fiscal consolidation process. The latter was undermined by the implementation of an ultra lose tax policy which did not financially facilitate the state expenditure based economic growth strategy of the government. Hence, the aim of 2014 fiscal proposals is to bridge the gap between tax policy and the expenditure strategies of the government which may assist sustain high economic growth rates. However, the market is likely to have responded to the immediate effect on aggregate demand in the economy by tax increases given that private investments growth is based on non-restricted growth of domestic demand.

On the other hand, more long term policy measures introduced by 2014 budget includes reducing the fiscal deficit and public debt as a share of the GDP to 5.2% and 74% respectively in 2014 and continuing the relatively high growth in government expenditure on infrastructure development. However, these latter long term policy measures have not been viewed as providing sufficient boost to revive trading activity in the Colombo Bourse. This is to say that currently the market is receptive towards mainly the short term changes in the economy and long term developments are considered with a lesser degree of intensity within the market mechanism. Furthermore, it reveals that market expects the government to offer fresh wave of optimism through each and every fiscal proposal. This was adhered to by the government during the four budgets immediately after the ending of ethnic war. However, this is not practical within the current context of the economy and may bear on the growth potential and economic stability by causing a misalignment in key macroeconomic variables.
To read the entire report - http://research.srilankaequity.com/t862-29-11-2013-weekly-review-asia-wealth-management-co-ltd#982 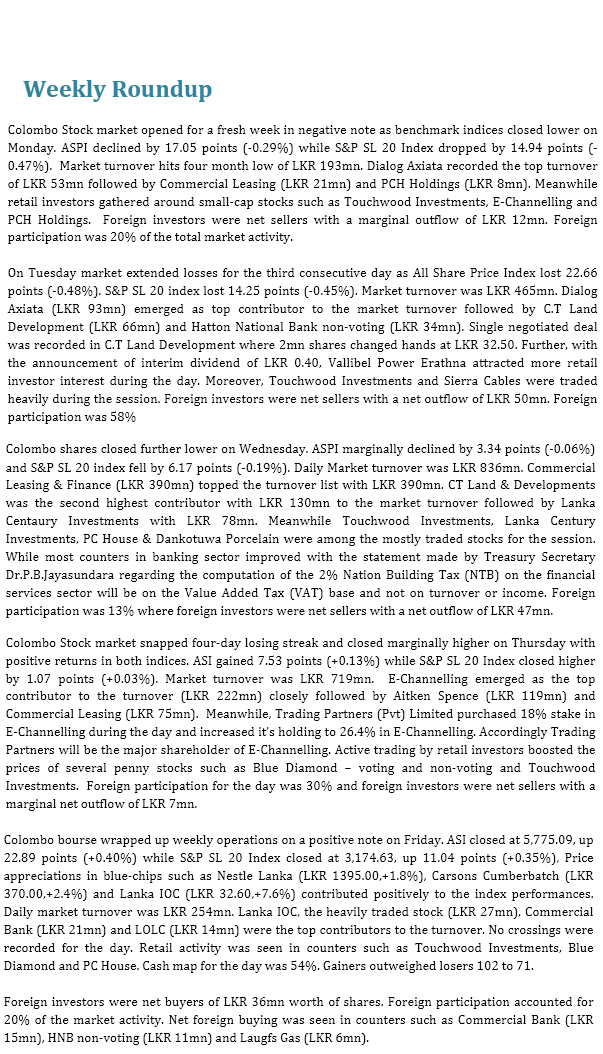 "Volumes too whittled down further amid low investor participation", the report said.

Turnover averaged Rs.0.49 billion per trading day, 42% lower than the year-to-date average of Rs.0.84 billion with foreign investors closing the week in a net selling position.

Acuity said that foreign inflows of Rs.0.4 billion on Friday failed to offset net outflows over the remainder of the week and projected subdued sentiment this week too.

Corporate earnings for the September quarter this year, with approximately 92% of the listed companies reporting so far, have declined 31% year-on-year to Rs.32.53 billion from Rs.47.22 billion reported by all companies a year earlier.

Sectors that reported earning gains were construction, healthcare, footwear and textiles and power and energy. Earnings in plantations, motors, investment trusts and chemicals and pharmaceuticals have declined significantly.

John Keells Stock brokers reported that the ASPI reported a further consecutive weekly loss last week "amidst sluggish activity levels on the back of the slowdown in local and foreign investor participation." 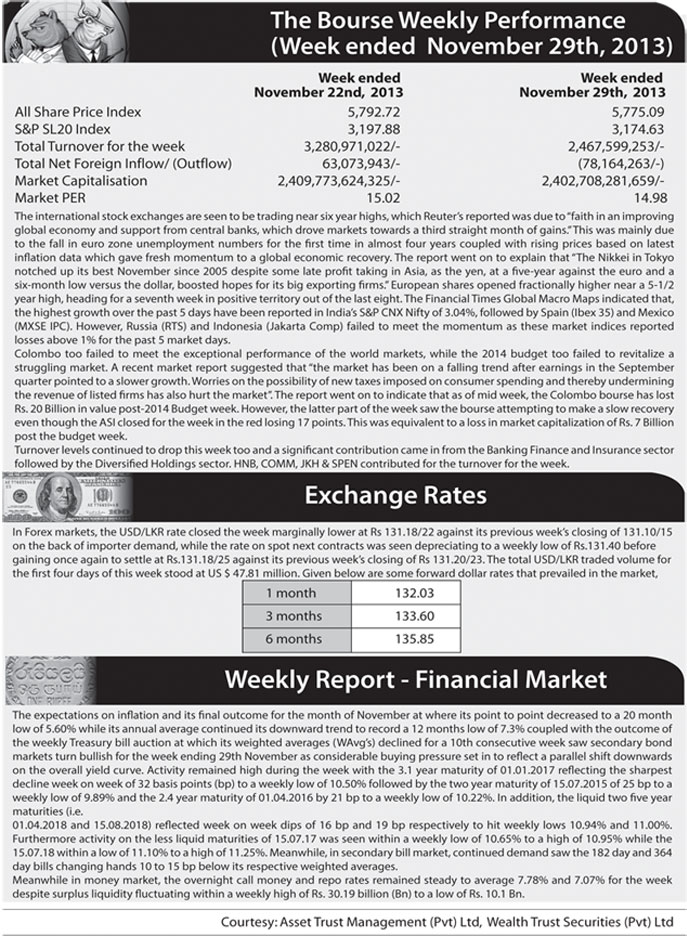