» When will supply chain disruptions ease?
by God Father Today at 1:56 pm 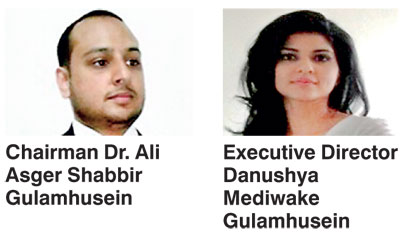 Adam Investments Ltd. is reinforcing itself as the latest hunter of acquisitions as it zeroed in further on troubled PCH Holdings PLC with two separate investments worth around Rs. 179 million.

The price paid for the loss making PCHH yesterday was Rs. 2 per share, 30 cents above last week’s closing. Its 52-week highest price was Rs. 9. Net asset per share is a negative 10 cents. The seller was Finco Holdings Ltd.

Adam Investments is expected to announce separate mandatory offers on both PCHH and Orient Garments.

Adam Investments is also a leading investor in the Colombo Stock Market and presently owns 9% of Ceylon and Foreign Trades PLC which is one of the oldest listed companies trading on the market.

Chairman Rishan’s Dynaris Holdings Ltd., owns a 39.89% stake in PCHH whilst separately holding a 12% stake. A year ago Dynaris held a 58.7% stake whilst Rishan held a further 11% stake.

Orient Garments suffered a loss of Rs. 144.2 million in the first half of FY14, up from a Rs. 27 million loss.
Apart from PCH Holdings, Dr. T. Senthilverl owns 14.25% stake in Orient Garments.

In PC House, Rishan holds a 21% stake and Dynaris holds a further 10.7% stake. Since October he has been partly shedding stakes in several related companies.

Adam Investments was incorporated in 2011 by Chairman Dr. Ali Asger Shabbir Gulamhusein, to focus on key growth industries that play a pivotal role in the country’s economy.

The companies that function under Adam Investments are: Adam Apparels Ltd., a premier manufacturer and exporter of garments for leading global fashion labels. For three decades this company has contributed to the largest export earning industry in the island, which despite local and international challenges, has continued to grow steadily year on year.

Adam Metals Ltd., which is one of the oldest manufacturers of metal hardware items in the island, is expertly positioned today to take advantage of the rapidly booming construction/infrastructure development projects in the island. Network Communications Ltd. is the group’s IT/Electronics arm.

With the rapid urbanisation of the island and the Government’s systematic drive to push the ICT industry forward, Network Communications shows a very promising future as a key player in a major Sri Lankan industry of the future.

The group recently inaugurated two new companies, namely Adam Automobiles Ltd. and Adam Air Conditioners Ltd. In 2011 / 2012 Sri Lanka saw its largest ever volume of vehicle imports. Thus Adam
Automobiles was conceived with the aim to provide spares and services to cater to the rapidly increasing demand for these items. 2012 saw a drop in importation of consumer electronics except for three items which were, TVs, mobile phones and air conditioners.

Since the group is already engaged in the importation of TVs and mobile phones through Network Communications Ltd., Adam Air Conditioners Ltd. was inaugurated to tap the growing demand for air conditioning systems in the country.
www.ft.lk

Mr. Adam and Ms. Eve , It is not a good decision to increase the stake .

For that volume in one shot he paid the premium?

It looks like another TWOD game. Sending it down then pumping up

how thay offer mandatory offer for PCHH when they have only 16%.....may be this is another gilmart of ft.lk.

kelum wrote:how thay offer mandatory offer for PCHH when they have only 16%.....may be this is another gilmart of ft.lk.

From above article read the following part

Machan Redbulls, today i saw sec has anounced that upto 2nd december,adams have only around 16%.i think after 31st of september adoms had sold some of there stake and yesterday again they brought 10%.if i am wrong please correct me....becouse if they give a mandatory offer we have a good chance to earn atleast 30%.

kelum wrote:Machan Redbulls, today i saw sec has anounced that upto 2nd december,adams have only around 16%.i think after 31st of september adoms had sold some of there stake and yesterday again they brought 10%.if i am wrong please correct me....becouse if they give a mandatory offer we have a good chance to earn atleast 30%.

Confused, wait and see for more clarification is better no?

I think Kelum is correct. Looks like Adam has dumped some of the shares it bought earlier in the open market before buying the 10% @ 2. So they actually crossed 30%

Adam related to CFT which is another manipulator.

As expected, Adam Investment is also heading for a Public Offering.

If you go to their http://ainv.lk/index.html you can get the hint.
Details not given yet.

As per the latest info, AINV IPO is a certain.

I think they have a chance to attract investors as they were doing well with their core businesses.

What I cannot understand is , ahead of an IPO , why they are eagerly buying ill fated, outdated PCs. ?

This is like ahead of your marriage you fell in love with a well known 3rd class pros and bring her to your house and not only that, you announce it to your future in laws.

Somehow , those who have missed PCH and PCHH , will get a chance to invest in PCHHH.

Redbulls wrote:For that volume in one shot he paid the premium?

The man is a retired EPF employee..??

Profile of Adam and Eva

Dr. Gulamhusein serves as Chairman of the board of Adam Investments Ltd. He holds a PhD from Tokyo, Japan and a Degree from King’s College London, UK. He has been bestowed with the prestigious title of “Deshabandhu Manawahithawadhi Lankaputhra” and also serves as advisor to the Ministry of Justice, Ministry of Co-operatives and Internal Trade and as a Justice of Peace (all island). Danushya Gulamhusein is the great-granddaughter of Sir William Gopallawa, Sri Lanka’s first President and last Governor General. Wethasinghe Gulamhusein has served as an Executive Director of Adam Investments from the inception of the company. She holds a degree in Psychology and Business Management (UK) and also serves as an advisor to the Ministry of Justice and the Ministry of Co-operatives and Internal Trade.