As more than 90 world leaders descend on Johannesburg, the public farewell to the former South Africa president will rival any such event we have seen

Nelson Mandela’s memorial service and his funeral on Sunday may not produce the biggest gatherings ever in Africa. Five million people attended the funeral of President Nasser in Cairo in 1970. In terms of global appeal, though, Mandela is in a different stratosphere – a unique combination of head of state, national icon, tribal leader and a figurehead of forgiveness, peace and racial equality.

It will be tricky to fit the right sort of occasion – with the right mix of mourning and celebration – to the death of such a figure. The plans, as they stand, square the circle pretty well.
More than 90 world leaders are expected to attend a four-hour memorial service in the 95,000-seat Soccer City Stadium in Soweto, Johannesburg. It’s the ideal spot – Soweto was the crucible of the struggle against apartheid and the stadium was the site of Mandela’s last public appearance at the 2010 World Cup. Johannesburg is also where Mandela died, in the pleasant suburb of Houghton.

A barnstormer of an address can be expected from President Obama – who has said the battle against apartheid sparked his first political activities. But what a logistical and security nightmare it will be. The public won’t need any accreditation to get into the stadium. And someone is going to have to do a very deft seating plan – David Cameron will not want to be sitting too close to Raúl Castro and Robert Mugabe.

President Hassan Rouhani of Iran may finally be on telephone-chatting terms with President Obama, but they’re hardly the best of buddies. Tehran’s Kayhan newspaper greeted the news of Rouhani’s attendance at the memorial service with the words, “Satan lays a trap, this time in Johannesburg.”

The funeral may be even trickier to arrange, being held, as it is, in Mandela’s remote village birthplace, Qunu – with only one small access road and a tiny local airport, 20 miles away. Most of the world leaders have been encouraged to leave after today’s memorial service. But some who were particularly close to Mandela – such as the Clinton family – will stay on. Others, such as the Prince of Wales, are coming to the funeral but not to the memorial service.
Mandela’s lying-in-state appears to be the most traditional – and easiest to arrange – part of this unique 10 days of ceremonial mourning. It will take place at the Union Buildings in Pretoria, the setting for his presidential inauguration in 1994. It is yet to be seen whether he will lie in an open coffin – the arrangement favoured by Catholic and totalitarian cultures; less so by Protestant ones.

The buildings will be given over to VIP visitors; Thursday and Friday will belong to the public, who will be able to view the coffin but not take photographs. On Saturday, Mandela’s body will be flown by military aircraft to Mthatha, in Eastern Cape Province. From there, his coffin will be taken by gun carriage to Qunu – in a symbolic transfer from public to private, the South African flag over his coffin will be changed to a traditional Xhosa blanket. Overnight, Mandela’s family, local chiefs and ANC leaders will stand sentinel over the coffin.

Crucial as these formal, public arrangements are, it’s unlikely that they will provide the enduring images of the occasion. Looking back at the great funerals of the modern age, it is the informal moments that are frozen in our minds.

At Churchill’s funeral in 1965, the moment most mourners recall is when the cranes of London’s dockyards dipped as his coffin was borne up the Thames. It was then the biggest state funeral to date, with 112 world leaders attending, and 350 million people watching the service live throughout Europe.

That was still the infancy of the television age. Mandela’s memorial service and funeral will be watched by hundreds of millions more. It will rank with the funeral of Pope John Paul II in 2005, attended by more than 70 heads of state, including five queens and four kings. It is thought to have been the biggest Christian gathering in history, with four million mourners flocking to Rome.

The Mandela ceremonials don’t follow a pre-set formula – to our eyes, it might seem odd to have a memorial service before a funeral. But even our most formal funerals often have an unscripted element.

Churchill’s funeral was partly based on Nelson’s – he, too, was carried up the Thames in a lead-lined coffin before being carried into St Paul’s; unlike Churchill’s coffin, Nelson’s was filled with distilled wine, an effective embalming fluid.

Jackie Kennedy largely modelled her late husband’s funeral on that of Abraham Lincoln. Only hours after JFK was assassinated, she rang Professor James Robertson, a Civil War historian, and asked him to research Lincoln’s funeral. Robertson rushed to the Library of Congress and trawled through back numbers of Harper’s Weekly and Frank Leslie’s Illustrated to track down woodcuts of Lincoln’s coffin in the East Room of the White House.

British royal state funerals – those of the Queen Mother and George VI among them – have a more formulaic pattern, with a lying-in-state in Westminster Hall. Pope John Paul II’s funeral also had built-in, traditional obsequies, from the crushing of the Papal Ring of the Fisherman, to prevent fraudulent posthumous sealing of Vatican documents, to the funeral clothes: a white soutane and alb, a stole and a red chasuble, following Byzantine practice.

On the next rung down from royal and papal funerals are ceremonial funerals, such as Lady Thatcher’s in April. Here, there is greater freedom of interpretation. Lady Thatcher had a church service at St Paul’s, a guard of honour and even more military honours than the Queen Mother or the Princess of Wales, because she was a former head of government. The choice of hymns and the decision to transfer her coffin to a gun carriage at St Clement Danes were entirely her own.
Even in the modern, televised age, where we have got used to the manufactured emotions of performers and manipulated responses of the audience, it is genuine, unrehearsed feeling that hits home.

At President Kennedy’s funeral in St Matthew’s Cathedral, Washington, the heart-breakingly memorable image is of John F Kennedy Junior’s salute on the steps, as his father’s coffin is carried away. The funeral fell on the day he turned three and his birthday party had to be postponed.
Bobby Kennedy’s funeral isn’t remembered so much for the requiem Mass at St Patrick’s Cathedral, New York, or his burial next to his brother in Arlington National Cemetery. What lingers in the mind is the train that carried his body from New York to Washington. All along the 225-mile route, the public lined the tracks, hand on heart, waving home-made banners, declaring “So long, Bobby”.

The most stirring moments after Diana, Princess of Wales’s death were the unprecedented, instinctive ones. The sea of flowers outside Kensington Palace were something of an informal liturgy. And, for all the ceremonial magnificence, nothing could be as moving as two dignified boys, only 12 and 15 at the time, walking behind a mother’s coffin alongside their father, uncle and grandfather.
If that wasn’t enough, the card on the coffin, addressed to “Mummy”, could have cracked the hardest of republican hearts. The moments when grand, public display chimes with private, personal grief are those that echo through the ages.

But the killing of a 46-year-old serving president, or the violent death of a 36-year-old beautiful princess, are different from Mandela’s death. There is no sense of unfulfilled promise or a premature end. It would be difficult to ask for a fuller life: to die at 95, surrounded by your family and friends, to have done more than can be expected of anybody in a lifetime.
Mandela’s memorial service and funeral can’t help but match the ideal of both ceremonies: to mingle celebration with sadness.

Today I watched Mr.Mandela's body arrives to his hometown "Qunu" with warm respect from all nation.

Can we see this type of honest respect for future leaders around the word and Sri Lanka ?

Is the below accurate regarding Ghandi?

When he was in South Africa, yes thats how Ghandi started his fight . But when in India he ultimate goal was different.

I highlight one of Ghandi quotes relevant to this fact

" there is no people on Earth who would not prefer their own bad government to the good government of an alien power. "

I have not studied much about Gandhi, but I know he was not a perfect person to represent India. Some say, Subhas Chandrabose , killed mysteriously, was the real hero.

Gandhi , the hero of West, was not accepted by low cast people in India because of his castisim thoughts.

1) Every great person , has some fault if we look deeply.

What you said is debatable . It based on different perspectives. No point going there.

Btw, Bose was great patriot Yes. But he also got himself involved with Nazis/Japanese from what I know ( not for personal benefit but to free india ) . So there was repercussions from other angles. Gandhi move was more peaceful. Bose did not exactly believe in non violance.


For Bose death , though there is documented reason , these are lot of suspicion yes.

2) From what I see, world tend to recognize more the people who won rights through non/less violence.
Mandela also had "less" violant intent.

Chinwi wrote:I have not studied much about Gandhi, but I know he was not a perfect person to represent India. Some say, Subhas Chandrabose , killed mysteriously, was the real hero.

Gandhi , the hero of West, was not accepted by low cast people in India because of his castisim thoughts.

@ sls,
I am just giving some different views only. The above sinhala summery was taken from that link. If we talk about India, it will take years .

BTW, for those who wanted to explore how the world behave as long as you act for them I wrote below text.
This is also a different perspective only.

This does not regard one person. It is a general observation.

Yes going to prison seems be a recognized factor if it was due to a recognized honorable cause. But it is only one factor in my opinion. Others being showing, considerable intent/attempt to solve the issue peacefully, the clear visibility of the genuineness of act based on humane methods/reasons and the ultimate victory due to act.

Ultimately there is a universal truth that wins. Actually it is the genuine / less violent cause/act that is venerated first before the person. But the person will ultimtely get the credit for the act/effort to achieve such a cause.

This is my opinion. 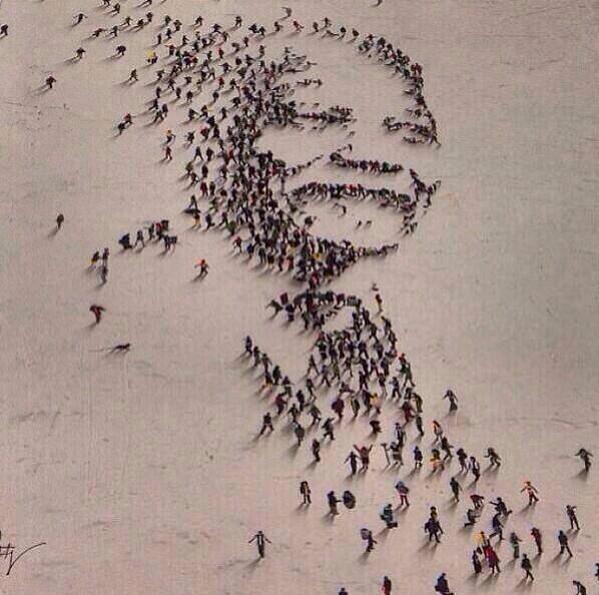