The Benchmark index gradually strengthened during the week supported by gains witnessed in few large cap stocks, whilst healthy market turnover was witnessed throughout the week. Several crossings and high net worth transactions on the normal board drove the market turnover, whilst retail participation remained low during the week. Low retail investor participation could be partly attributable to investors adopting a wait and see approach ahead of the monetary policy rate decision next week. Commercial Leasing and Finance emerged as the week’s top turnover contributor adding c. 30.3% to the week’s total turnover mainly driven by crossings witnessed throughout the week.

Commercial Leasing and Finance that featured crossings of 90mn shares at LKR5.0 on Tuesday and Thursday, and a crossing of 46m shares at LKR5.0 on Friday, also emerged as the highest volume traded stock for the week with a cumulative c. 284.7mn shares being traded over the week. In addition, counters such as Lanka Orix Leasing, John Keells Holdings, Nestle Lanka and Orient Garments also witnessed crossings during the week. On the back of these large trades daily average turnover for the week increased to c. LKR 938.3mn against LKR 493.5mn recorded during the previous week.

Meanwhile Central Finance announced its first interim dividend of LKR0.85 per share whilst Access Engineering announced an interim dividend of LKR0.25 per share. In addition CSE approved the listing of National Development Bank’s LKR10bn worth debentures on the Main board and Nations Trust Bank’s LKR3bn worth debentures to be listed on the main board. Retail investors pursued counters such as PCH Holdings, Expolanka Holdings and Blue Diamonds Jewllery Worldwide. Further the week recorded a total share volume of 508.8mn against 388.1mn recorded in the previous week, which is a 31.1% WoW gain.

The week saw foreign purchases amounting to LKR1,334.5mn, whilst foreign sales amounted to LKR998.6mn. Market capitalisation stood at LKR 2,417.3bn and the YTD performance is 3.0%.


Conclusion: Shift towards fixed income securities could dampen equity market activity..
Performance at the Colombo bourse displayed an improvement as the indices gained WoWwith the cumulative daily turnover and volume advancing over the previous week and foreigners becoming net buyers with a net inflow of LKR 336.0mn against an outflow of LKR 67.0mn reported in the previous week. However, activities were largely driven by crossings and block trades that were witnessed on selected index heavy weights with the support of institutional and high net worth buying, whilst retailer participation remained passive with the interest centered mostly on small cap penny stocks.

Subsequent to exempting interest income on listed debentures 2013 has witnessed several Banks and Finance companies issuing(as well as in the process of issuing) debentures, which are redeemable and attached with attractive rates (c. 10%-14% p.a) that are tax free. Thereby, despite the fact that debentures being relatively illiquid over equities, stable return offered with lower risk compared to the equity market return is mostly likely to induce investors to shift towards listed fixed income securities amidst the lackluster performance of the equity market over the past few years. This is to say that amidst the drop in market interest rates attractive rates provided by listed debentures are likely to provide an alternative investment mode to traditional savings accounts and equity market.
To read the entire report - http://research.srilankaequity.com/t865-06-12-2013-weekly-review-asia-wealth-management-co-ltd 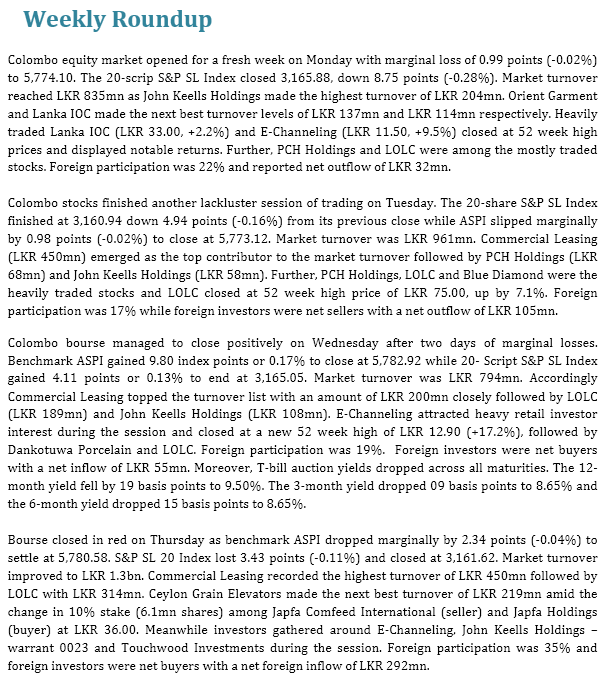 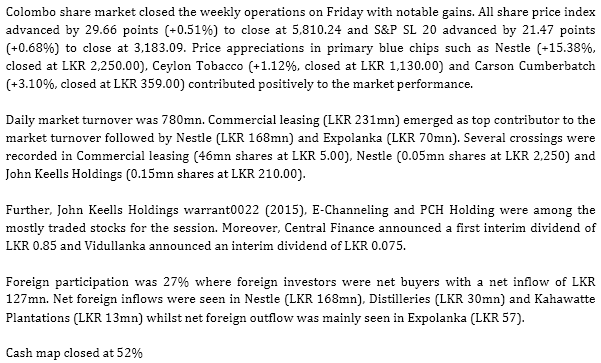 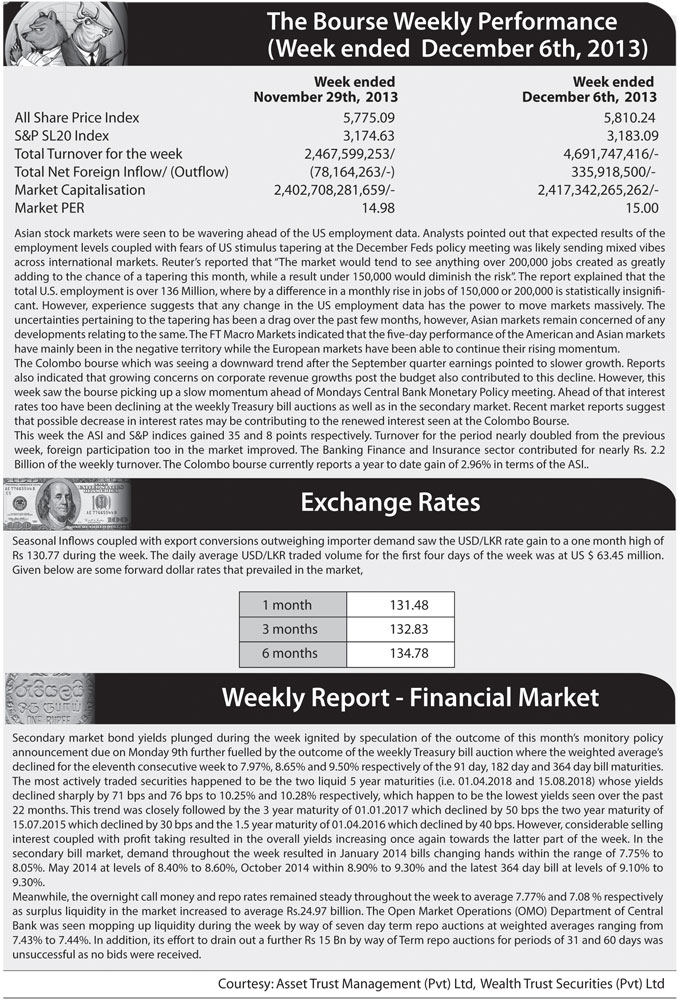 Nestle, the market’s third largest capitalized stock almost single handedly uplifted market indices at Friday’s trading, because of its share price increasing by 15.38% to Rs. 2,249.90 over its previous day’s close on a transaction, data showed.

Nestle was subjected to a foreign buy on the back of local selling, which resulted in the bourse experiencing a net foreign inflow (NFI) of Rs. 126.46 million on Friday, taking overall NFIs for the year to date to Rs. 22.9 billion.

Nestle’s contribution to the day’s turnover was Rs. 168.3 million, however, it was superseded by Commercial Leasing & Finance plc, an LOLC company, which made the highest turnover for the day with a figure of Rs. 231.4 million.

Poor Quarterly Earnings
Nevertheless, poor quarterly earnings of listed companies for the quarter ended September 30, 2012; coupled with rising NPLs in financial institutions and the uncertainty in regard to laws pertaining to gambling investments, have been attributed to the bourse’s listless performance as a whole these days.

The only bright spot is the seeming fall in interest rates. In a falling interest rate market, theory says that that may induce investors to once more seek the stock market as a better investment tool, in order to get a higher return on their investments.

Meanwhile the bourse, after a lapse of nearly a month, passed the Rs. one billion mark at Thursday’s trading.

In this process, it was assisted by LOLC and its subsidiary Commercial Leasing & Finance which contributed Rs. 863.5 million (66.4%) to the day’s turnover of Rs. 1.3 billion.

The bourse last crossed the Rs. one billion mark on November 8, making a turnover of Rs. 1.6 billion then.

Foreign Selling
At the beginning of the week on Monday, foreign selling of blue chip JKH’s shares, the market’s largest capitalized stock dominated trading, resulting in a net foreign outflow (NFO) of Rs. 32.34 million, though, in the year to date, the market has had experienced an NFI of Rs. 22.6 billion.

On Tuesday the bourse suffered a NFO of Rs. 105.30 million, following a similar performance the previous day, therewith bringing down its NFI figure in the year to date to Rs. 22.45 billion, from the previous day’s number of Rs. 22.56 billion.

However Commercial Leasing Finance and its parent LOLC uplifted Wednesday’s stock market turnover to Rs. 794.5 million, by contributing nearly half (Rs. 388.5 million) of that figure.