Edgar Cayce was born on March 18, 1877 near Beverly, Hopkinsville, Kentucky. He was one of six children of farmers Leslie B. Cayce and Carrie Cayce.[4]

In December 1893 the Cayce family moved to Hopkinsville, Kentucky and occupied 705 West Seventh on the southeast corner of Seventh and Young Streets. During this time Cayce received an eighth-grade education, discovered his spiritual vocation, and[6] left the family farm to pursue various forms of employment.

Cayce's education stopped in the ninth grade because his family could not afford the costs involved.[7] A ninth-grade education was often considered more than sufficient for working-class children. Much of the remainder of Cayce's younger years would be characterized by a search for both employment and money.
Throughout his life, Cayce was drawn to church as a member of the Disciples of Christ. He read the Bible once a year every year, taught at Sunday school,[8] and recruited missionaries. He is said[by whom?] to have agonized over whether his psychic abilities and the resulting teachings were spiritually legitimate.
In 1900, Cayce formed a business partnership with his father to sell Woodmen of the World Insurance; however, in March he was struck by severe laryngitis that resulted in a complete loss of speech.[7] Unable to work, he lived at home with his parents for almost a year. He then decided to take up the trade of photography, an occupation that would exert less strain on his voice. He began an apprenticeship at the photography studio of W.R. Bowles in Hopkinsville.

In 1901, a traveling stage hypnotist and entertainer named Hart, who referred to himself as "The Laugh Man", was performing at the Hopkinsville Opera House. Hart heard about Cayce's condition and offered to attempt a cure. Cayce accepted his offer and the experiment took place on stage in front of an audience. Cayce's voice allegedly returned while in a hypnotic trance but disappeared on awakening. Hart tried a posthypnotic suggestion that the voice would continue to function after the trance, but this proved unsuccessful.[9]

Since Hart had appointments at other cities, he could not continue his hypnotic treatment of Cayce. However, a local hypnotist, Al Layne, offered to help Cayce in restoring his voice. Layne suggested that Cayce describe the nature of his condition and cure while in a hypnotic trance.[9] Cayce described his own ailment from a first person plural point of view, "we" instead of the singular "I".[9] In subsequent readings he would generally start off with "We have the body". According to the reading, his voice loss was due to psychological paralysis and could be corrected by increasing the blood flow to the voice box. Layne suggested that the blood flow be increased and Cayce's face supposedly became flushed with blood and both his chest and throat turned bright red.[9] After 20 minutes Cayce, still in a trance, declared the treatment over. On awakening his voice was alleged to have remained normal. Apparently, relapses occurred, but were said to have been corrected by Layne in the same way and eventually the cure was said to be permanent.

Layne had read of similar hypnotic cures by the Marquis de Puységur, a follower of Franz Mesmer, and was keen to explore the limits of the healing knowledge involved with the trance voice.[10] He asked Cayce to describe Layne's own ailments and suggest cures and reportedly found the results both accurate and effective. Layne suggested that Cayce offer his trance healing to the public. Cayce was reluctant, but he finally agreed on the condition that readings would be free. He began, with Layne's help, to offer free treatments to the townspeople. Reports of Cayce's work appeared in the newspapers, which inspired many postal inquiries.[10] Cayce was able to work just as effectively using a letter from the individual as with the person present. Given the person's name and location, he said he could diagnose the physical and mental conditions and provide a remedy. Cayce soon became famous and people from around the world sought his advice through correspondence. 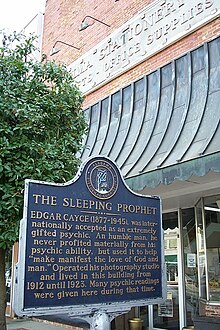 Historic marker in downtown Selma, Alabama, in front of the building in which Cayce lived and worked from 1912 to 1923.

Cayce's work grew in volume as his fame grew. He asked for voluntary donations to support himself and his family so that he could practice full-time. To help raise money he invented "Pit", a card game based on the commodities trading at the Chicago Board of Trade, and the game is still sold today. He continued to work in an apparent trance state with a hypnotist all his life. His wife and eldest son later replaced Layne in this role. A secretary, Gladys Davis, recorded his readings in shorthand.[10]

The growing fame of Cayce along with the popularity he received from newspapers attracted several eager commercially-minded men who wanted to seek a fortune by using Cayce's clairvoyant abilities. Even though Cayce was reluctant to help them, he was persuaded to give his readings, which left him dissatisfied with himself and unsuccessful. A cotton merchant offered Cayce a hundred dollars a day for his readings about the daily outcomes in the cotton market; however, despite his poor finances, Cayce refused the merchant's offer.[11] Some wanted to know where to hunt for treasures while others wanted to know the outcome of horse races.[12] Several times he was persuaded to give such readings as an experiment. However, when he used his ability for such purposes, he did no better than chance alone would dictate. These experiments allegedly left him depleted of energy, distraught, and unsatisfied with himself. Finally, he decided to use his gift only to help the distressed and sick.[10]

In 1923, Arthur Lammers, a wealthy printer and student of metaphysics, persuaded Cayce to give readings on philosophical subjects.[13] Cayce was told by Lammers that, while in his supposed trance state, he spoke of Lammers' past lives and of reincarnation, something Lammers believed in. Reincarnation was a popular subject of the day but not an accepted part of Christian doctrine. Because of this, Cayce questioned his stenographer about what he said in his trance state and remained unconvinced. He challenged Lammers' charge that he had validated astrology and reincarnation in the following dialogue:
Cayce: I said all that?... I couldn't have said all that in one reading.Lammers: No. But you confirmed it. You see, I have been studying metaphysics for years, and I was able by a few questions, by the facts you gave, to check what is right and what is wrong with a whole lot of the stuff I've been reading. The important thing is that the basic system which runs through all the mystery religions, whether they come from Tibet or the pyramids of Egypt, is backed up by you. It's actually the right system.[14]
Cayce's stenographer recorded the following:
In this we see the plan of development of those individuals set upon this plane, meaning the ability to enter again into the presence of the Creator and become a full part of that creation.Insofar as this entity is concerned, this is the third appearance on this plane, and before this one, as the monk. We see glimpses in the life of the entity now as were shown in the monk, in this mode of living. The body is only the vehicle ever of that spirit and soul that waft through all times and ever remain the same.
Cayce was quite unconvinced that he had been referring to the doctrine of reincarnation, and the best Lammers could offer was that the reading "opens up the door" and to go on to share his beliefs and knowledge with Cayce.[15] Lammers had come to him with quite a bit of information of his own to share with Cayce and seemed intent upon convincing Cayce now that he felt the reading had confirmed his strongly-held beliefs.[16] It should be noted, however, that 12 years earlier Cayce had briefly alluded to reincarnation. In reading 4841-1, given April 22, 1911, Cayce referred to the soul being "transmigrated". Because Cayce's readings were not systematically recorded until 1923, it is possible that he may have mentioned reincarnation in other earlier readings.

Cayce reported that his conscience bothered him severely over this conflict. Ultimately his trance voice, the "we" of the readings, also supposedly dialogued with Cayce and finally persuaded him to continue with these kinds of readings.[17] In 1925 Cayce reported that his voice had instructed him to move to Virginia Beach, Virginia.[18]

Cayce's mature period, in which he created the several institutions that would survive him, can be considered to have started in 1925.

By this time he was a professional psychic with a small staff of employees and volunteers.[19] The readings increasingly came to involve occult or esoteric themes.[20]


In 1929 the Cayce hospital was established in Virginia Beach, sponsored by a wealthy recipient of the trance readings, Morton Blumenthall. Morton Blumenthall was a wealthy New York stockbroker who had had the most extensive readings with Cayce, some 468. He is said to have made considerable gains through insights into the market at these readings.


Cayce gained national prominence in 1943 after the publication of a high-profile article in the magazine Coronet titled "Miracle Man of Virginia Beach".[19] He said he could not refuse people who felt they needed his help, and he increased the frequency of his readings to eight per day to try to make an impression on the ever-growing pile of requests. He said this took a toll on his health as it was emotionally draining and often fatigued him. He even went so far as to say that the readings themselves scolded him for attempting too much and that he should limit his workload to just two readings a day or else they would kill him.[21]
Edgar Cayce suffered a stroke at the age of 67 in 1945 and died on January 3, 1945.[22] He is buried in Riverside Cemetery in Hopkinsville, Kentucky.[23]

Tha name of the Book is" SANSARA MANDIRA"