Confusion and chaos was the order yesterday within the leisure and entertainment industry as well as the Parliament following the gazetting of three integrated resorts involving two of Sri Lanka’s famous corporate names as well as a world famous gaming mogul.

The gazette figures partly differ from original announcements made by the Government as well as individual firms whilst there was an explicit omission of casinos or gaming activity as well.

The approval sans omission of wording casinos or gaming prompted the Opposition to cry foul yesterday in Parliament. Whilst Deputy Investment Promotion Minister Faizer Musthafa told Reuters that these integrated resorts won’t have casinos, the vocal UNP MP Dr. Harsha de Silva charged in Parliament asking Government
MPs why the State was misleading the country and taking people as fools.

The blistering attack from the UNP as well as stiff opposition from the clergy however is on the premise that IRs so approved do include gaming/casinos though the Government didn’t have the backbone to say so.

Industry analysts expect greater clarity on this contentious issue because they are of the view that without gaming the proposed IRs business model doesn’t become viable at all. This position has caused concern within the business and investment community as well as leisure and entertainment industry which have welcomed the promotion of gaming.

All approved Integrated Resorts (IRs) referred to will have star class rooms, high-end shopping malls, residencies office/service spaces with “associated facilities”.  The latter prompted some analysts to speculate just an implication of the inclusion of gaming or casinos but this couldn’t be confirmed.

“The applications are for mixed development projects, which include convention centre, shopping malls, and five-star hotels,” Mustapha told Reuters.

However, he said there was a separate mechanism for operating a casino in Sri Lanka and government policy was not to issue any new casino licences, but to allow existing approvals to operate under regulations passed in 2010.

The three IRs have been proposed for Strategic Development Project Act status given the fact that they attract strategic importance in view of the substantial contribution. The key emphasis is promoting tourism which attracts a high priority in economic development as per the development strategy of the Government.

The three IRs combined entail a direct overall investment of $ 1.4 billion including $ 850 million in foreign direct investment as well as generating over 8,000 jobs and bringing in substantial foreign exchange earnings.

Crown/Lake Leisure has been given four years from the date of agreement signed between the BOI and the project company to bring in the FDI whilst JKH’s duration is five years, and three years for Dhammika Perera.
JKH has already raised Rs. 13 billion via a Rights Issue to part finance the project. Its share price yesterday gained by Rs. 1.40 (+0.6%) and on the strength of the gazette notification will continue to work on the project.  All three IRs await Parliament approval, which is expected to be in early 2014.

Given strategic importance, a slew of concessions have been approved (see table) for all three IRs including a 10-year corporate income tax holiday whilst partial tax exemptions thereafter have been reduced to 12 years for Crown, whereas JKH and Dhammika will enjoy three years more.  VAT relief will be confined to goods and services of project related during the project implementation period only. 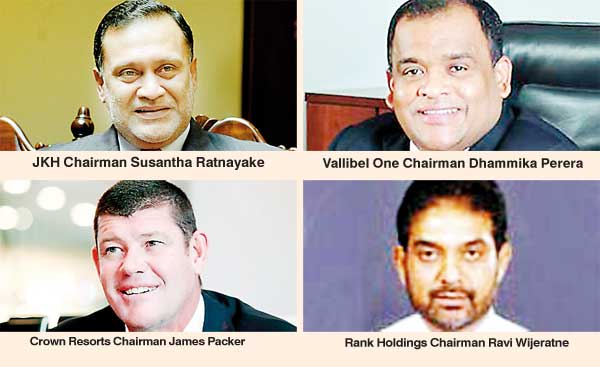 Packer said in a speech at a Commonwealth forum last month said he believed the Indian Ocean island nation could be turned into a leading tourist hotspot for the rising middle classes of India, China and the rest of Asia.

Opposition Legislator Dr. Harsha De Silva who has led the charge against the Government’s casino bill, yesterday slammed the regime for attempting to mislead the country and taking the country for fools after it gazetted the controversial James Packer hotel project on Tuesday night.

Speaking in Parliament yesterday De Silva said that Rank Holding Chairman Ravi Wijeratne had told a Sunday newspaper he would open a casino at D.R. Wijewardena Mawatha and the Government had held an urgent cabinet meeting the next day despite it being Poya.

De Silva said that the Government had attempted to pull the wool over the eyes of the public with the earlier strategic withdrawal of the casino bill and gazetting it this week using different words.

“At the emergency cabinet meeting, Ministers confirmed the decision allow a casino and the tax reliefs,” charged Dr. de Silva.

“Last night (17) Minister Lakshman Yapa Abeywardena published a gazette notification on par with the decision taken by Cabinet of Ministers met on Monday. In this gazette the Minister has announced the necessary tax reliefs offered for James Packer for his proposed casino. There was a previous gazette issued on 18 July 2013 notifying details about the same project. However, the earlier gazette talks about a casino and the recent gazette talks about the Integrated Super Luxury Tourist Resort facility. There is no difference between these two and they may be taking us for fools,” he said.

De Silva claimed that religious leaders had come together against the casino culture the Government was trying to bring about in the country, causing the Government to withdraw the first gazette.

“Now the Government is identifying it as an Integrated Super Luxury Tourist Resort facility. Is this the good governance? Don’t you have a backbone to come forward to announce the establishing of the casino?

James Packer and Ravi Wijeratne are two of the investors engaged in this casino. We will talk about the third investor sometime later,” said MP Dr. de Silva.

According to this controversial notification, gazette extraordinary No. 1841/4 of 17 December 2013, the particular casino project will set up and operate an Integrated Super Luxury Tourist Resort which consists of 400 rooms including high-end shopping malls, high quality residencies and office spaces/service spaces with associated facilities at D. R. Wijewardena Mawatha, Colombo 10.

The Gazette omits approval for betting and gaming facilities at the resort. The total investment in this project will be $ 350 million and will be considered as a Strategic Development Project. The proposed casino will provide employment for approximately 2,600 locals and consequent income earning opportunities for Sri Lankans.
http://www.ft.lk/2013/12/19/casino-bill-by-another-name-passed-by-stealth-harsha/