» Understanding inflation and share prices.
by KavinduTM Today at 6:51 pm

» Shadow Portfolio of a leading HNWI
by madukp Today at 10:58 am

» Sri Lanka fuel prices after revision
by SAGA Today at 8:02 am

» How did PSX perform in the aftermath of EU resolution to review Pakistan's GSP+
by samaritan Today at 6:53 am

» Watch: Investing in Asia in the New Normal- Nimal Perera speaks too
by ADVENTUS Yesterday at 6:36 pm

» Prime Residencies IPO. Over Priced?
by High-flyer Yesterday at 2:51 pm

» Stocks rose across Asian Markets after China & US agree to push forward trade, investment ties
by J-CAT Yesterday at 10:58 am

» Be willing to take action toward your goals every day. You only lose when you give up.
by Asoka Samarakone Yesterday at 8:01 am

Bourse welcomes the New Year with a positive glimpse.

Posts : 1636
Equity Stars : 5799
Reputation : 232
Join date : 2011-09-27
Sri Lankan stocks edged up extending the upward momentum which commenced the previous Friday greeting the New Year with a positive start. The ASI gained 97.1 points WoW to close at 5,973.8 points (+1.7%), whilst the S&P SL20 Index gained 54.2 points WoW to close at 3,294.8 points (+1.7%). Indices benefitted mainly on the back of gains made by Ceylon Tobacco (+6.0% WoW), John Keells Holdings (+1.3% WoW), Distilleries Company of Sri Lanka (+4.6% WoW), Carsons Cumberbatch ( +3.8% WoW) and DFCC Bank (+7.5% WoW) Subsequent to ending the holiday season, the Colombo bourse revived from its previous lackluster sentiments as the benchmark index continued its bull run during this week to end with a WoW gain. The ASI reached its psychological 6,000 mark during the first hour of trading on Friday but failed to sustain the momentum and slid back to its 5,000 region. The week witnessed continued foreign, high net worth and institutional buying on few selected index heavy weight counters, whilst retailers were active on small cap stocks. Week also witnessed a WoW rise in average daily turnover and average daily volume of 24.0% and 7.3% respectively.

Commercial Bank emerged as the highest turnover contributor for the week recording LKR 556.7mn which is a contribution of 23.4%, where the counter witnessed two crossings at LKR 118.0 and LKR 122.0. In addition, other counters that witnessed crossings during the week were John Keells Holdings, that recorded the second highest turnover for the week, Hatton National Bank, Ceylinco Insurance and Aitken Spence Hotel Holdings.

Highest volumes traded counter for the week was the non-voting shares of SMB Leasing with an aggregate share volume of over 18.0m, followed by the voting share of SMB Leasing, Expo Lanka Holdings and Asia Asset Finance.

Further, during the week the CBSL announced the lowering of its standing lending rate facility by 50bps on the 2nd day of 2014 which had a positive impact towards the equity market, as the benchmark index gained c.1.0%. In addition, the CBSL also expressed its commitment over reducing the number of finance companies in Sri Lanka via encouraging mergers with banks and within finance companies, whilst the monetary authority announced the removal of the 100% cash margin on car imports that was imposed in August 2013, which could likely to have a favorable impact on the cost structure of the automobile sector.

In addition, CSE gave the green light to its first IPO for the 2014 to Millennium Housing Developers
Limited.

In addition, except for Bukit Darah, companies within the Oil Palm sector announced dividends, whilst Commercial Bank announced its second interim dividends of LKR 1.0 for the financial year 2013.

The week saw foreign purchases amounting to LKR 733.1mn whilst foreign sales amounted to LKR735.9mn. Market capitalisation stood at LKR 2,485.3bn and the YTD performance is 1.0%.


Conclusion: Towards a Greener 2014... Expected Market Performance of the New Year

The significant recovery in country’s external finances indicated by export receipts rising phenomenally since August 2013 coupled with the continuation of government’s public investments and plummeting interest rates is expected to raise the real growth of the Sri Lankan economy over 7% YoY in 2014E. This revival in economic activity may boost the prospects of the Colombo Bourse. In this connection we expect the domestic interest rates to fall further by 100 to 150 basis points during the year.

The drop in interest rates in the domestic financial markets is assisted by the drop in yields across the world on the back of long drawn out quantitative easing measures adopted by major Central Banks in the lights of U.S, Japan and in Europe. The ensuing prevalence of excess liquidity in global financial markets relative to the absorption capacity of the production structure of the world economy tends to press down on interest rates across the world, which in turn boosted the equity market indices in Asia as well as in the developed world. In this light it is our view that currently, Bangladesh, Sri Lanka, Vietnam and Indonesia is showing signs of interest rate convergence given the similarity in risk levels of the group of economies mentioned.

Under this backdrop Colombo Bourse became the sixth best performing market in Asia during 2013 recording a gain of 4.8% YoY after posting two years of consecutive decline whilst S&P SL 20 recorded a growth of 5.8% YoY. The total capital raised during the year amounted to LKR119.4bn whilst fresh debt and net foreign inflow stood at LKR 68.3bn and LKR 34.1bn respectively.

On the other hand, the initial drop in stock market indices across the emerging and frontier markets in the world when the U.S. Fed first announced its tapering plans in September 2013 would also mean that the highest gains from the present positive reading of the measures to cut down the bond buying programme from USD 85 billion to USD 75 billion will be reaped by the emerging and frontier markets that possess relatively higher growth prospects. This would mean that a reverse flow of portfolio funds towards emerging economies especially in Asia can be expected in the short to medium term into selective markets and asset classes which is most likely to benefit equity trading activity in the Colombo Bourse as well, assisted by healthy growth prospects of the economy.

However, the drop in government revenue remains to be one of the key obstacles in this pursuit given that government may have to resort to further tax increases in the face of increasing expenditure plans. This is likely to increase the internal price level of the economy bearing on its growth potential which is indicated by relatively high lending rates despite the fall in deposit rates of the banking system. The prevailing high level of prices mainly driven by tax increases has hence raised the level of risk in lending to a certain extent and on the other hand is keeping the operating costs of the banks high which in tandem lead to higher market lending rates despite falling deposit rates.

Brushing off this sign of weakness in the economy foreigners ended up as net buyers during the year indicating the continued interest of the fundamentally driven investor classes on the performance of the Colombo Bourse. The sharp fall in Treasury bill rates seen during the past few weeks coupled with the positive interpretation of the Fed’s policy decision to taper its QE efforts by world markets would have strongly contributed to this trend. The Central Bank lowered key rates by 125 points since December 2012 to December 2013 which made capital markets more attractive for investors. In order to further stimulate economic growth amidst the improving trade deficit and slow down inflation, the CBSL cut its reverse-repo by a further 50bps in January 2014.
To read the entire report -http://research.srilankaequity.com/t873-03-01-2014-weekly-review-asia-wealth-management-co-ltd#993 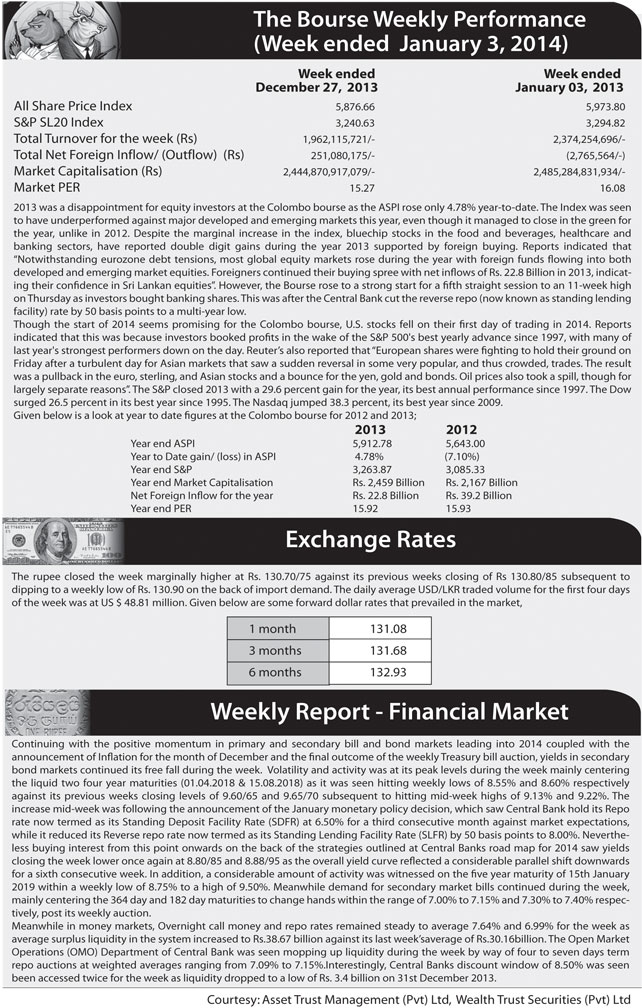 Re: Bourse welcomes the New Year with a positive glimpse.