» GREAT OPPORTUNITIES FOR EVERYONE-
by ADVENTUS Yesterday at 5:12 pm

» LOLC to enter the giant Indian Market
by samaritan Yesterday at 4:52 pm

» Buy lofc tomorrow - Maharaja
by Anushka Perz Yesterday at 12:59 am

Co-Admin
Posts : 6822
Equity Stars : 22400
Reputation : 2855
Join date : 2011-02-01
Location : London
By First Capital Equities
Having underperformed against most developed and emerging markets during 2013 with a gain of just 2.3% (in dollar terms), we believe that the ASPI is set to change course during 2014 and poised for a much awaited re-rating.

Our bullish market outlook is due to the following;
Continued softening in domestic interest rates 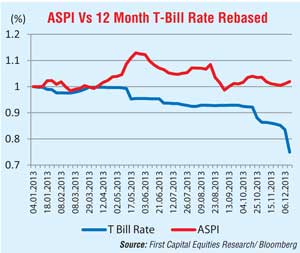 Twelve T-Bill rates have declined by 285 bps during 2013 and indications are that rates are likely to soften further this year which may result in a shift in funds from the money market to equities. In the Central Bank’s Monetary Policy Review for the month of January 2014, the Central Bank has already indicated that it will reduce the lending rate by 50 bps to 8.0% pointing to further reductions in market rates.

Recovery in corporate EPS growth. With domestic inflation expected to be benign during 2014, we expect operating margins of companies to improve from their 2013 levels. This combined with a reduction in interest costs should result in an expansion in corporate net margins thereby resulting in a recovery in corporate profitability. 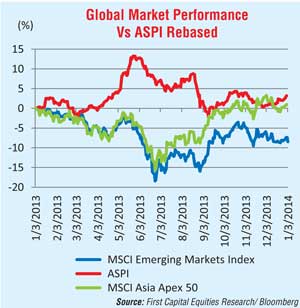 Notwithstanding eurozone debt tensions, most global equity markets rose during the year with foreign funds flowing into both developed and emerging market equities. As shown in the chart, the correlation between the MSCI Emerging Markets Index, the MSCI Asia Apex 50 index and the ASPI remains strong. With emerging market bond funds expected to record outflows this year, we expect liquidity to flow into emerging/frontier market equities. Given the country’s robust fundamentals, Sri Lanka may be a strong beneficiary. 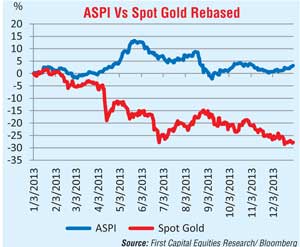 Having declined by 28% during 2013 and as one of the worst performing assets during the year, spot gold is expected to continue decline (albeit moderately) during 2014. Given the inverse co-relation between gold prices and the ASPI during the 2013 as evident in our chart, we believe that any further decline in gold should exert upward pressure on the ASPI.

Reduction in debenture offerings
The significant amount of debentures offered in 2013 mopped up approximately Rs. 72 billion of investible funds that could have otherwise entered the stock market resulting in market turnover levels falling to considerably low levels. Given our expectation of a further softening in interest rates in 2014, the allure of debentures as an ‘investible’ may wan resulting in a flow of funds back into equities.

In economic news, inflation on a YoY basis declined to a two year low of 4.7% in December 2014 compared to 9.2% recorded in the corresponding period of 2012. Consequently the annual average rate of inflation declined for the seventh consecutive month to 6.9% compared to 7.3% recorded in the previous month. A slowdown in the price increase of items in the Non-food category, from 10.0%YoY in 2012 to 6.1%YoY in 2013, contributed to a decline in the annual average inflation rate while relatively high inflation in the food and non-alcoholic beverages category has exerted upward pressure on the CPI.

2014 stock picking guidelines – Back to basics
In order to benefit fully from the bourse’s movements in 2014, we believe that investors may have to revisit the basics of equity investing to derive maximum returns at their accepted level of risk. While most domestic investors were discouraged to enter the bourse last year on the grounds that the market did not deliver, quality stocks listed on the bourse did however generate double digit returns and we believe that they are well likely to replicate their gains in 2014.

Market trajectory
While we do contend that the Sri Lanka bourse has not delivered on an YTD basis in 2013 due to a multitude of factors, our 2014 market outlook remains increasingly bullish. However, we advise investors to remain selective and focus on companies with largely monopolistic attributes and strong brand loyalty within sectors and sub-sectors that are both growth and resilient. We re-iterate the need consequently to build a solid portfolio of liquid stocks that have strong top line revenue growth and sustainable margins which we believe are likely to benefit most from the domestic demand story in sectors such as F&B, tourism, manufacturing, diversified, banking and construction. In this respect, we accentuate the need to take a directional call, make an informed investment decision, build a robust portfolio and maintain a strict investment discipline in order to benefit fully from the Bourse’s 2014 upward trajectory.
http://www.ft.lk/2014/01/06/2014-we-are-bulls-smart-money-in-equities/

mark wrote:So foreigners going to have a good return on what they have bought in last two years

yes of course, Locals be ready to buy at higher levels from foreigners.

» "Bulls make money, bears make money, but pigs just get slaughtered!"
» My Money Seminar: Smart Investing For Everyone
» ASIAN DEVELOPMENT OUTLOOK 2014 - CHINA & SRI LANKA GROW 7.5% IN 2014 HIGHEST IN ASIA
» As our Bulls are sleeping Aussie bulls to fly to Sri Lanka
» Turf War at CSE Between the bulls and the bears- seems like bulls are cowering.