Market celebrates an upsurge in sentiment

Colombo bourse that that initiated the week on a negative note with a 0.5% dip on Monday, surged from Tuesday onwards gaining over 100 points (c.2.0%). In addition market capitalisation increased 1.8% WoW, whilst average daily turnover and volumes also increased by 68.0% and 59.0% WoW respectively. Week also witnessed a strong increase in foreign participation, which resulted in a net foreign inflow of c.LKR 430.0mn. Week’s turnover was energized by several block trades that were triggered specially on the Bank, Finance and Insurance sector, whilst Diversified, Manufacturing and Power & Energy sectors also witnessed crossings. CBSL’s decision to further ease the monetary policy by lowering interest coupled with the expectation of dividend pay-outs by firms with December financial year ends would have most likely supported the current upsurge in the market sentiments.

Chevron Lubricants Lanka that registered the highest turnover for the week encountered several crossings at LKR 273.8.

Meanwhile, John Keells Holdings, Hatton National Bank and Commercial Bank were amongst the top five turnover contributors during the week and also witnessed several crossings. In addition, DFCC Bank, Richard Pieris and Company and Laugfs Gas were amongst the other shares that witnessed crossings over the week. Apart, from these crossings, these stocks witnessed several block transactions on the normal board as well.

Highest volumes traded counters for the week was non-voting shares of The Finance Company with a cumulative share volumes of 24m shares followed by PCH Holdings, Expo Lanka and Asia Asset Finance.

Meanwhile, considering the road map policy 2014 put forward by the CBSL which encouraged Banks and Finance companies to consolidate, DFCC and National Development Bank made an announcement to the CSE on Friday indicating that they will be commencing preliminary discussions over a consolidation.

As expected the trading activity in the New Year commenced with hype in confidence levels of investors and resulted in both indexes gaining well over 1% during the week. Few reasons can be cited as the central catalysts for this trend. The drop in the yields on government securities witnessed recently raised the spread between the rate of aggregate profits and the rate of interest in the economy in general, given that aggregate rate of profits increased, remained unchanged or else fell at a rate slower than the rate of decrease in domestic interest rates. This
phenomenon tends to raise the value of firms listed in the stock exchange and hence provides a boost to equity trading activity of the economy.

However, on the other hand, the drop in domestics interest rates is triggered by demand for aggregate investments moderating relative to the availability of foreign and domestic savings in the economy, which is indicated by the drop in the rate of credit growth to private sector coupled with recent primary treasury bond auctions being oversubscribed by as much as three to four times. The drop in interest rates at the world level on the back of large scale quantitative easing measures adopted by the U.S Fed and the Bank of Japan is providing the necessary framework for this trend. Further, on the other hand, considering the relative price level of the Sri Lankan economy, this points to the reciprocal argument that on account of the prevailing high internal prices compared to the region, the aggregate demand in the economy has somewhat moderated, providing space for domestic interest rates to continue its downward trend. In this backdrop, we expect the current treasury yields to fall further by 100 to 150 basis points, converging with the rates of regional economies such as Indonesia, Bangladesh and Vietnam
bearing similar levels of risk.

Given that the deficit in the trade account fell as much as circa 44% YoY in November 2013 on the back of export receipts rising circa 25% YoY and by the drop in imports expenses by circa 14% YoY hand in hand with high internal price level, further indicates that the internal liquidity levels or domestic savings will rise relative to the aggregate demand in the home market. This phenomenon provides further leverage for the interest rates to fall domestically. Hence, under this particular setting, the remaining excess of savings over investments in the economy tends to shift towards the stock exchange, given that the capacity of the real economy to absorb the excess funds in the domestic system tends to be low. This is witnessed by the continuous chase on large cap counters with the support of institutional and high net worth participants during the recent trading sessions in the Colombo Bourse as the surplus savings will be more accessible to the large scale investors compared to that of the retailers. In this backdrop, the significant recovery in country’s external finances indicated by export receipts rising phenomenally since August 2013 tends to further assist this trend, improving the prospects of the trading activity of the Colombo Bourse.
To read the entire Report: http://research.srilankaequity.com/t876-10-01-2014-weekly-review-asia-wealth-management-co-ltd#997 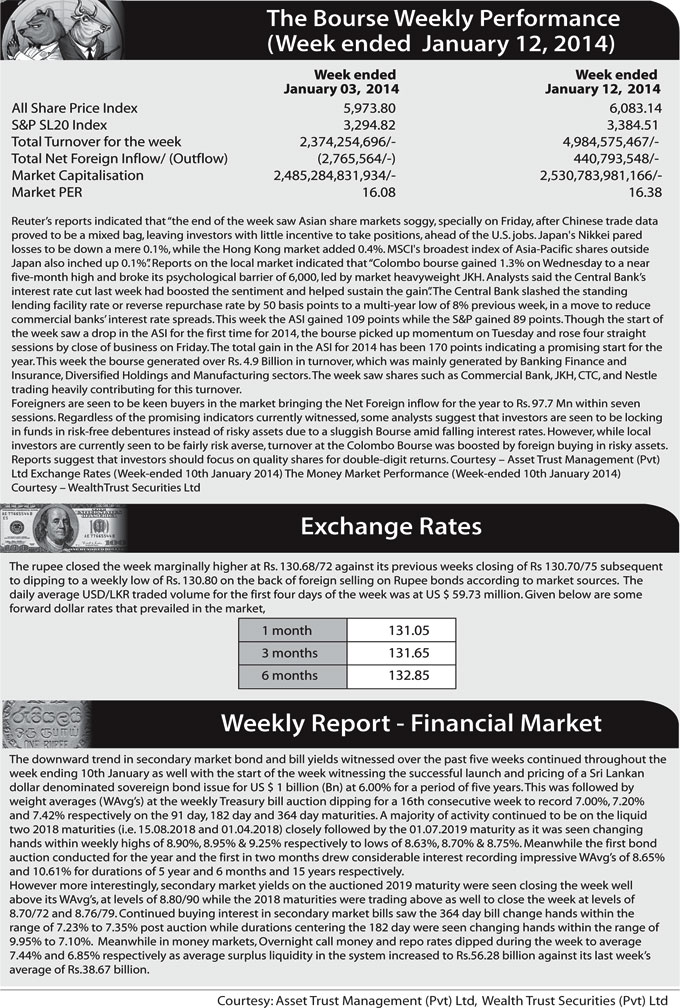 Re: Market celebrates an upsurge in sentiment