» SGH buys EXPO from retailers
by sureshot Today at 5:21 pm

» Buy lofc tomorrow - Maharaja
by ADVENTUS Today at 11:47 am

» US inflation eased slightly in July
by ADVENTUS Today at 11:25 am

» Pakistan stocks surge on IMF Staff level agreement - CSE is warming up for the big run
by samaritan Today at 11:16 am

Indices slowed down during the week resulting in a WoW dip of 7.6 points, although daily activities remained healthy on the backdrop of the continuous buying spree witnessed on few selected blue chips by foreign, Institutional and high net worth investors that triggered several crossings over the week and the active participation of retail investors. Bank, Finance and Insurance grabbed the highest interest, whilst sectors such as the Diversified, Beverage Food and Tobacco etc. were amongst the other sectors that witnessed considerable crossings over the week.

Second largest turnover contributor for the week John Keells Holdings also witnessed institutional and high net worth buying along with crossings at LKR 235.0, whilst 1.65mn shares of Aitken Spence Holdings changed hands in a crossing at LKR 100.0. Amongst the several other counters that witnessed crossings over the week were Chevron Lubricants Lanka, Ceylon Tobacco, Nestle Lanka, Aitken Spence Hotel Holdings, Expo Lanka and Brown and Company.

Both the Voting and non-voting shares of SMB Leasing continued to record the highest cumulative share volume for the second consecutive week, of which the voting shares of SMB Leasing witnessed considerable block trades whilst garnering a mix of retail and high net worth buying on the normal board. Other counters that resulted considerable volumes over the week includes Expo Lanka, Touchwood Investments and Free Lanka Capital Holdings.

In addition, new addition to the board Amana Bank Limited with an issue price of LKR 7.0, commenced trading at the CSE on Wednesday, which reached a high price of LKR 7.10 but lost ground ending the day LKR 6.0 whilst it ended the week at LKR 5.8. In addition, the first IPO of the year Millennium Housing Developers opened for subscription on Tuesday and closed the next day subsequent to full subscription of its first tranche of 16mn shares at LKR 6.0.

The week saw foreign purchases amounting to LKR 1,455.4mn, whilst foreign sales amounted to LKR1,247.3mn. Market capitalisation stood at LKR 2,608.3bn and the YTD performance is 5.7%.

Treasury yields dropped marginally in the weekly auction held on the 29th January while remaining flat during the previous week’s auction, indicating on one hand that the continuous fall in interest rates seen during the past few months is taking a breather. On the other hand it further suggests that the domestic interest rates may prove to be resilient against the interest rate increases seen within the regional economies such as India and Bangladesh. The decision taken by the U.S. Fed to continue the tapering process and limit the bond buying programme to USD 65 billion per month though is bearing on the market indices across the world; we believe that the domestic interest rates in Sri Lanka may not be negatively impacted by the move. On the back of higher growth prospects indicated by the economy coupled with the recovery of its balance of payments position backed by a surge in exports receipts and a moderation of imports expenditure, the current structure of interest rates will be capable of retaining the interest of foreign portfolio investors who currently hold nearly 14% of the total volume of outstanding government securities which amounts to over USD 4 billion. Hence, any room for interest rate increases seems rather remote and the converse to be true is highly likely despite the rising interest rates in few regional economies and U.S. Fed’s QE tapering.

The regional rates have increased largely due to internal economic concerns specific to those economies rather than as an outcome of U.S. Fed’s decision to slowdown asset purchasing. For instance, persistently high level of inflation witnessed in the Indian economy which remained over 10% for the past couple of years is largely due to the high domestic food prices in India triggered by supply concerns, rather than as a result of monetary policy changes in the U.S. This also suggests that the move to increase policy rate by 25 basis points by Indian monetary authority may not be ideal to control food inflation as the latter is triggered by supply constraints rather than by heightened demand pressures in the economy. Similarly, the political unrest in Bangladesh coupled with the loss of export orders for their garments industry due to recent concerns on safety and income standards of the workforce has caused the Bangladesh interest rates to rise due to elevated risk levels of the economy. Furthermore, more importantly, reduced inflation expectations in the U.S following the move to cut down the bond buying programme is likely to put downward pressure on global interest rates rather than creating a tendency for the rates to rise. Hence, on the back of these developments we are of the view that treasury yields in Sri Lanka may fall further by approximately 50 basis points during the year assisting the favourable outlook for equity trade in the economy. 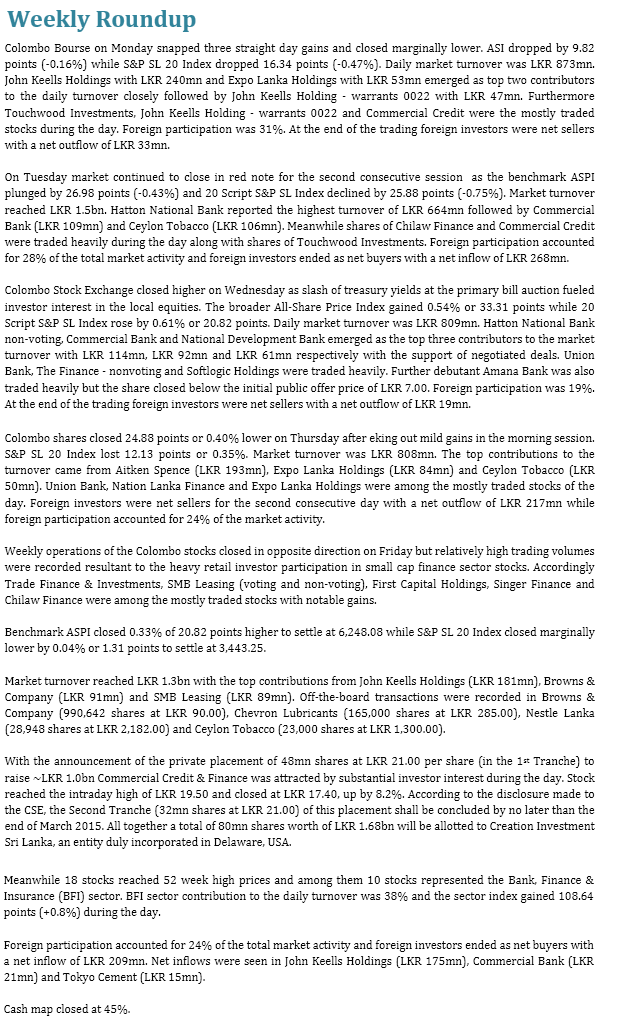