» LOLC to enter the giant Indian Market
by samaritan Today at 11:27 am

» HORANA PLANTATIONS PLC (HOPL)
by cheetah Today at 11:05 am

» SGH buys EXPO from retailers
by samaritan Today at 9:34 am

The bourse besides recording above average market turnover and volume during the week lacked enthusiasm due to reserved retail participation while institutional and high net worth investments largely drove the market. Foreign investors were mostly on the selling mode during the week largely mirroring the sell off being witnessed in emerging markets subsequent to the curtailment of the stimulus by the Federal Reserve. Further investors remained cautious over the weaker than expected interim results released so far for 4QCY2013 and the upcoming UNHRC session in March. John Keells Holdings which witnessed ten crossings during the week emerged as the week’s top turnover contributor adding c. 44.7% to the week’s total turnover. The daily average turnover for the week increased to LKR 1,825.7mn against LKR 1,056.1mn recorded during the previous week, which is a 72.9% WoW gain.

Dialog Axiata witnessed 11 crossings and emerged as the highest volume traded stock for the week with a cumulative 58.2mn shares being traded during the week. In addition, counters such as Commercial Bank of Ceylon (voting & non-voting), Expo Lanka Holdings, Sampath Bank, Vallibel One etc witnessed crossings during the week. Meanwhile the week recorded a total share volume of 269.0mn against 370.3mn recorded in the previous week, which is a 20.1% WoW dip.

The week saw foreign purchases amounting to LKR 1,332.3mn whilst foreign sales amounted to LKR4,402.9mn. Market capitalisation stood at LKR 2,563.9bn and the YTD performance is 3.9%.

Conclusion:
Sri Lanka may weather the storm…
The Colombo stock market witnessed a bearish sentiment throughout the week propelled by net foreign selling amounting to LKR 3.1bn. This reversed the year-to-date net inflow, to a LKR2.2 bn net outflow, which is largely in-line with the sell-off being witnessed in several emerging markets subsequent to the curtailment of the stimulus by the US Federal Reserve. Further, approximately LKR one billion has been divested by foreign investors from Sri Lanka treasury securities during the week ending 29th January 2014. Despite these signs of modest outflow of foreign funds from the economy the domestic interest rates have remained low coupled with a stable exchange rate in contrast to the experience of bulk of the emerging economies such as Turkey, Argentina, Brazil, South Africa etc., This indicates that the level of outflow of funds from the Sri Lankan economy is not large enough to affect the key monetary aggregates such as the domestic interest rates and the exchange rate and hence so far the effects of U.S. tapering has been largely benign with respect to its impact on the economy in general.

Following the decision made by the U.S. Fed to taper its stimulus efforts emerging markets were shunned by heavy outflows of foreign funds which initially reached the Asian shores on the back of U.S. money printing adopted as the key method of economic stimulus. Now that the Fed has decided to windup the programme by September this year, it is the view of the markets that unavailability of Fed generated liquidity may put downward pressure on the asset prices in Asia. Hence, as a precautionary measure, the investors are reducing their exposure to Asian markets and flowing back to U.S. treasuries which is considered as the safe haven for portfolio investors in times of global economic uncertainty. The inflow of funds to U.S. from the emerging world has caused the U.S. treasury yields to drop which is supported by the low inflation expectations triggered by the tapering. However, considering the strengthening of the balance of payments position of the economy on the back of revival in exports receipts coupled with the stable outlook on medium term growth expectations we are of the view that Sri Lanka may weather the financial headwinds currently storming the emerging world.
To read entire report - http://research.srilankaequity.com/t889-07-02-2014-weekly-review-asia-wealth-management-co-ltd#1015 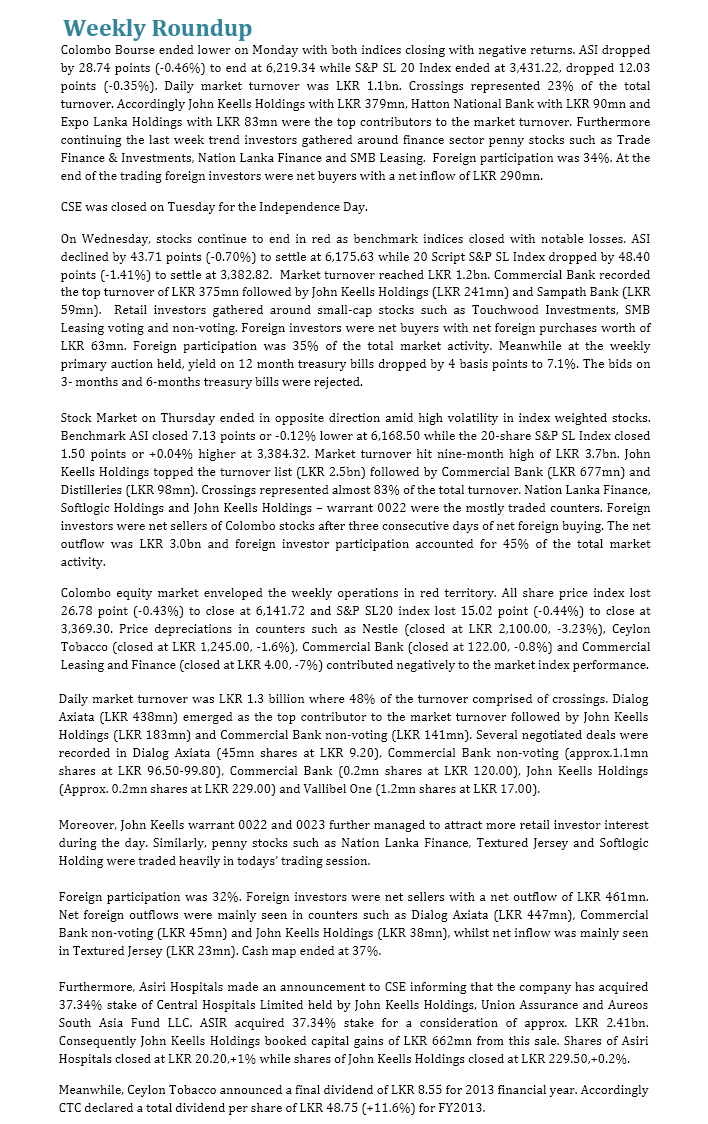 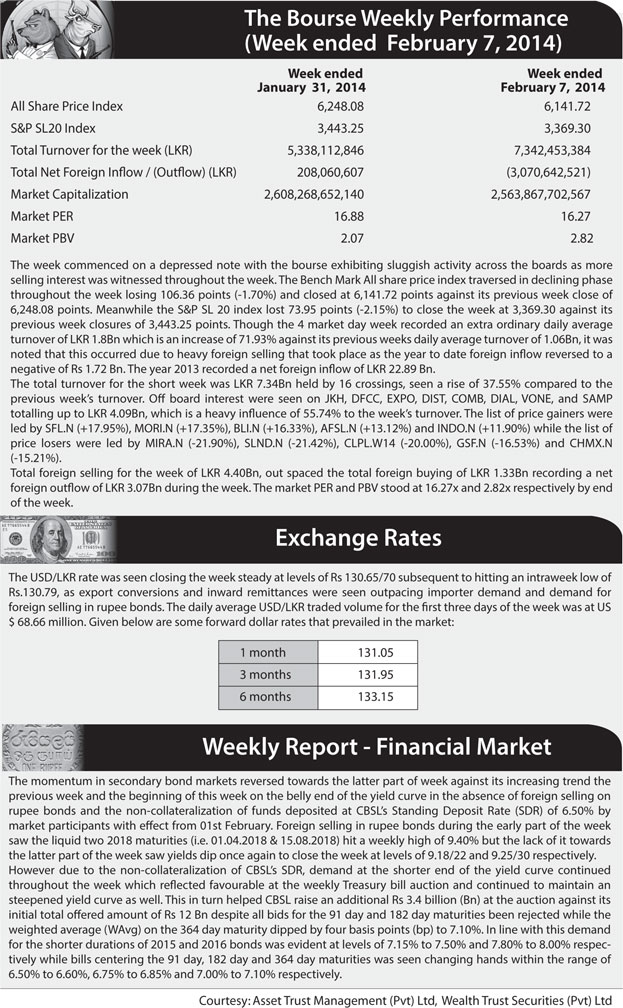