» No trader can flee from making a mistake. It’s just that you need to be careful about not repeating your mistakes.
by Asoka Samarakone Yesterday at 8:56 pm

Continuous foreign selling on blue chips drags down the market….

Colombo bourse was predominately on a downward momentum, whilst few long-standing foreign funds such as Janus Overseas, Franklin Templeton, Morgan Stanley etc. continued to partially sell their holdings in few blue-chip counters brining the YTD net out flow to over LKR 3.3bn, whilst few local institutions and high net worth individuals were on the buying side. However, as a result of these large-scale transactions daily turnovers and volumes were given a boost resulting in week’s average daily turnover and volumes to be c. LKR 1.13bn and 60.2mn respectively.

Conglomerate John Keells Holdings that emerged as the highest turnover contributor during the week witnessed foreign selling during the week when long standing Janus Fund sold few blocks from its previous intakes, which was bought buy few high profile local investors. The counter accounted for c. 42.5% of the week’s total turnover tally with a contribution of LKR 1.92bn. Dialog Axiata that recorded the second highest turnover also witnessed a crossing where 19mn shares changed hands at LKR9.20, where foreigners were the selling party. In addition, Commercial Bank witnessed a few crossings over the week where foreign investors were on the selling side.

Highest volumes recorded during the week were Asia Asset Finance emerged as the highest volume traded counter for the week with a cumulative share volume of c. 77.8mn shares followed by Dialog Axiata, Vidulanka, Orient Garments. In addition, most of the corporates by except for banking counters have released their 3rd quarter financials, which has shown mixed results. Meanwhile, Hayleys Plc subsidiary Alumex Ltd, announced the CSE of its LKR 839.0mn IPO which is the second IPO for the year 2014 where 59.9mn ordinary voting shares at LKR 14.0 will be issued. The issue will comprise of two tranches where c.17.9mn shares will be in the form of an offer for subscription and c.42.0mn shares in the form of an offer for sale. The date of opening of the subscription would be on the 6th of March 2014.

The week saw foreign purchases amounting to LKR 900.5mn whilst foreign sales amounted to LKR1,978.7mn. Market capitalisation stood at LKR 2,539.5bn and the YTD performance is 2.9%.

Trading activity in the Colombo Bourse during the week was marked by two distinct trends bearing major influence over activity levels. The partial selloff from the foreigners which continued from the previous week was tied with a degree of uncertainty among the local investors whether to cash in from the opportunity created by lowered indices due to exit of foreign investments; these can be cited as the two major trends which largely shaped the direction of the market during the trading week and they are most likely to influence activity levels during the week to follow. The uncertainty among the local investors was mainly driven by the less clear state of affairs created by the foreign selloff amidst considerably improved earnings results of conglomerates in 4Q2013 coupled with falling market interest rates and the rupee remaining stable compared to depreciation pressures faced by other emerging economies. Under this backdrop, the locals adopted a ‘wait and see approach’ while selling pressure from foreigners eased towards the end of the week, which in tandem drove the market turnover well below the 12-month average during the final two days of the trading week.

The partial exit of the foreigners from the equity market was triggered by the reverse flow of foreign funds from emerging markets towards mainly the U.S. and the developed markets in general which has become a trend driven less by reason and not due to a relative weakness in the domestic economy against that of the regional peers. The interesting aspect to consider in this regard is that during the week ended on 5th February 2014 government securities recorded a surprising LKR 15.5 billion foreign inflow even as the stock market saw approximately LKR 3 billion drawn out by foreigners during the same period. This reveals the fact that the foreign selloff from equities was merely a precautionary measure and has not caused a net outflow of foreign funds from the economy although there was a net foreign outflow from equities. This is reflected by the continuous stability shown by the Sri Lankan rupee coupled with the dip in market interest rates and treasury yields despite foreign selling from equities.

In this light, we are of the view that foreign investors moved from equities and other forms of cash holdings to government securities given that the latter is less volatile and more reliable compared to equities in periods of baseless uncertainty. This is to further indicate that the U.S. Fed’s decision to taper its QE programme is having no impact on the key fundamentals of the domestic economy and hence we are of the view that it is an ideal time for the locals to take advantage from the lowered market indices caused by foreign activity. This is strengthened by the improvement of earnings posted by conglomerates during the final quarter of 2013 coupled with the fact that balance of payments position of the economy has stabilised considerably at the start of the New Year which reduces the room for exchange risk associated with foreign activity within the economy.
To read entire report: http://research.srilankaequity.com/t891-13-02-2014-weekly-review-asia-wealth-management-co-ltd 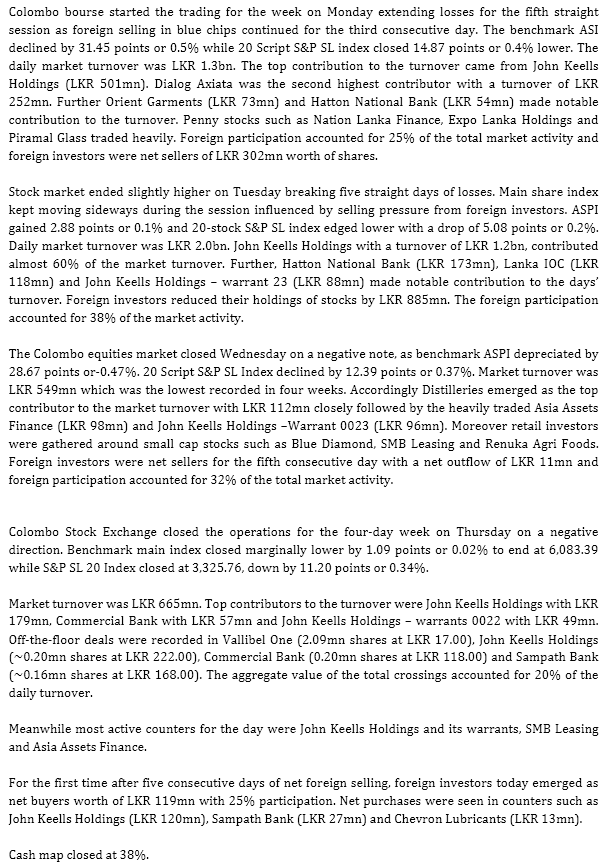