Funny Fonny!! What did he say? 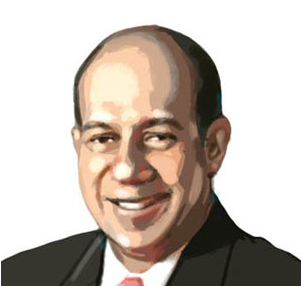 Mr. Nihal Fonseka joined the Board of DFCC Bank in January 2000 when he was appointed as Chief Executive. He is the Chairman of the Colombo Stock Exchange and the Association of Development Financing Institutions in Asia and the Pacific (ADFIAP), as well as a member of the Governing Board of the National Institute of Business Management (NIBM) and of the Advisory Committee on Finance and Banking of the Ceylon Chamber of Commerce. He is also a member of the National Payments Council, Inter- Regulatory Institutions Council and the Presidential Commission on Taxation. Mr. Fonseka is a Graduate of the University of Ceylon, Colombo, and a Fellow of the Chartered Institute of Bankers, UK.

Nihal Fonseka: We are not a typical high street commercial bank; our core business since the bank was formed 55 years ago has been development banking: supporting entrepreneurship and creating employment. A lot of today’s big businesses in the country had some dealings with us during their formation and in whatever area you look at we are usually at the forefront of any thrust sector. Supporting Sri Lankan entrepreneurship is particularly rewarding for me.

TRC: Looking back over the history of the bank, what would you say have been its core strengths and competitive advantages?

NF: Our business model has been an advantage, in that we have been able to mobilise wholesale long term funding from sources outside Sri Lanka, without being entirely reliant on domestic capital. We have a strong track record established with multilateral and bilateral institutions such as the World Bank and the ADB. The second advantage that we have had is because of the nature of our business we have built a very strong skill base in relation to project appraisal, project evaluation and project monitoring. As a result we have a lot of multi-skilled professional staff rather than the typical commercial banking staff who solely deal with day-to-day transactions. We are recognised here in this market as being a whole service provider so we have become a first port of call for any Sri Lankan entrepreneur who chooses to embark on a new project or a capacity expansion.

TRC: Looking specifically at the last 2 years since the resolution of the conflict in 2009, what significant changes in strategy have you implemented in order to adapt to this new era?

NF: In our early years a lot of the development was centred around the western province and as a result we had no presence on the ground in the north and east. Very soon after the conflict ended we got in there and we now have a footprint right over the country. Unlike a lot of other banks and financial institutions, we are net transferrers of capital to those regions. We also realised that we cannot rely on being a niche player in the project lending space only - we need to offer a wider range of products and services. We built capacity about 7 years ago by acquiring a small commercial bank which now operates from around 125 locations. It provides follow-on financing for the working capital, trade finance, foreign exchange services and money transfer services once we provide project funding to somebody. As a result we can give a full range of financial services to entrepreneurs.

TRC: How would you describe the current business climate in Sri Lanka, and where do you see the DFCC bank headed over the course of 2012?

NF: From a domestic perspective, the economy is doing rather well in the sense that there is a lot of economic activity taking place. Some of it is driven by public sector spending on infrastructure, which of course is an essential ingredient of development, but what we saw starting from the beginning of 2011 was that private sector investment started picking up significantly in several areas.

Tourism is an obvious sector for growth, but we have seen a wide spectrum of other areas like manufacturing, logistics, healthcare, education and agriculture. This is now tempered by some of the global issues which have an impact, particularly the issues in Europe, as Europe is quite a big trading partner for Sri Lanka.

In tourism we have begun to see some diversification of markets into Asia and the Middle East so in that sector Europe may not affect us so much.

The other major issue that could affect us is the Middle East especially in relation to Iran and Syria, who are major buyers of Sri Lankan tea. We import more than 90% of our oil from Iran, and therefore how the sanctions will pan out to affect Sri Lanka is something we have our eyes on. It can have an effect on the price of oil and the balance of payments.

Generally the issue that will most affect Sri Lanka is the availability of capital to keep the growth momentum going. We have had 8% growth for a couple of years now but the fact is that our domestic savings are not enough, we have about 26% of GDP in savings and to sustain this growth we need to get to about 32% of GDP in savings so that 6% gap will necessarily have to come from foreign sources. That said, I don’t see our growth slowing down too much. Overall the economy is strong and resilient.

TRC: How easy would you say it is for foreign investors to come to Sri Lanka?

NF: The processes are quite streamlined. We were one of the first countries in this part of the world in to open up the economy for foreign investment back in 1977. Whether you come in as a direct investor or whether you come in through a secondary market, there are quite simplified processes available for the free movement of capital in and out of the country.

There are some areas where we need to improve. For example in our legal administration, while the laws are ok, there are some delays so it is somewhat inefficient, but that’s probably the case in several countries in this part of the world, There are also the foreign perceptions about the human rights issue. It’s a complex topic and I think there need to be certain steps taken by the politicians to resolve some of the ongoing issues.

TRC: How do you feel Sri Lanka can work to combat negative perceptions from abroad?

NF: When you’re outside Sri Lanka you get a completely different picture, particularly if you just listen to what is reported. Perhaps we haven’t done well enough to change those perceptions. Certainly there are issues; when you’ve had a 30 year war you’re not going to be able to sort everything out in 2 years, and I think there are things that the politicians need to do to get the whole thing onto a sustainable level and make sure that we never go back to what it was.

TRC: What would you say to investors looking at Sri Lanka?

NF: Sri Lanka is a good place to invest. We have had several British companies who have invested here. The main thing I would say is to come and see it on the ground. It’s a good place to do business and despite these global issues, this is a good time to get in before things get too expensive. Looking at property prices and market valuations, Sri Lanka is still relatively cheap. In the business community you can find the right partners and there is no anti-foreign sentiment. Because we’re islanders, we have this cohabitation and integration that not present in China or India. We consider foreigners as guests and it’s in our culture to look after them.

TRC: What opportunities are there for collaboration between foreign investors and Sri Lankan companies?

NF: One area that will see a lot of development in the financial sector is in the capital markets, rather than in banking per se. In banking, the scale is small but the banks from a customer-centric point of view are as good if not better than the banks in the UK. Where we are lacking is in relation to the capital markets and structured finance. That is not developed and that is a significant area where people can come in. There are fewer restrictions in that area than collaborating on normal high street banking products.

We have an investment banking joint venture and there can be significant collaboration opportunities available to foreign institutions in that area, particularly from Britain, given that it is a leader in that sector.

We have also had some preliminary discussions related to the paucity of domestic capital. The bigger companies are looking to go to overseas capital markets to raise capital for their growth and one option is for them to get secondary listings in other stock exchanges. That again is an opportunity for investors, as our banks are going to need a lot of capital to support Sri Lanka’s development. There’s a recognition that the big players are in Europe, so London would be the natural candidate for us to target groups of investors.