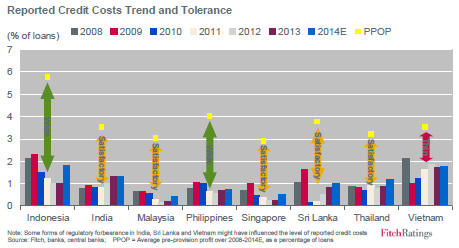 "The portfolios (of gold-backed loans) have shrunk and the risk is much more manageable," Young said.

"So I would that as other parts of lending begin to expand, that would become less of an issue."

Reported capital was overstated compared to other countries, due to zero risk allocation for gold loans.

"If you do not have to allocate capital against it then the commercial dynamics are skewed in the wrong direction."

But capital buffers in Sri Lanka's bank were sound though under pressure.

"How we look at risk buffers is the capital ratio and also the profitability," he said. So the first buffer is your profitability.

"You have to absorb the credit loss before it hits the capital. A key aspect of that is obviously your lending margin, which in Sri Lanka has been coming down, with the low interest rates.

"That has been a feature across the region so the whole of Asia has benefited from lower interest rates.
"But that has meant that margins that banks make has been squeezed. The buffers remain sound but obviously under pressure due to the lower interest rate environment.

"And then you’ve got buffers in the capital as well. And now you could argue that given the risk weightings of pawning on the asset side (zero risk on gold portfolio) that capital ratios are not necessarily comparable to some of the other markets in the region."

Sri Lanka's Central Bank has given a credit guarantee to increase pawning loans from 65 percent to 80 percent of collateral to encourage lending.

"I think really the question is whether the banks will utilize it," he said. "Some banks have got their fingers burnt so they are a bit more cautious about lending purely with gold as collateral.

"A number of banks we have spoken have reassessed their risk appetite to the segment of the market."

"The other side of it is, that cash that the people in the rural areas can benefit, has been taken out of circulation. I can understand the desire of authorities to put money back into circulation."

Credit bubbles are part of a business cycle that has been present as long as banking systems existed, even during the free banking era.

Classical economists however have pointed out that cycles have generally become worse after central banking came, as they resist interest rate increase that nips the bubble in the bud earlier.

In the US for example the two worst collapses of banking bubbles and runs - Great Depression and Great Recession - came after the Fed was set up.

A series of 19th century bank runs were smaller and of shorter duration, except the 1870s bubble which was blown by paper dollars printed by President Lincoln to fight the civil war.

In Europe during the downturn central bankers have worsened the crisis by tightening capital rules at a time when banks were already super-cautious, reducing their ability to lend, then trying to push credit by printing money, in a classic demonstration of state interventions with perverse incentives.

Young says Sri Lanka's credit will start to pick up in the second half of the year.

"The authorities are concerned about the slow rate of credit growth but my expectations are that the credit growth will tend to pick up as the economy gains a bit more broad-based momentum," he said.

"Everything is cyclical. Each economy will go through its cycle. It all depends on how much debt servicing ability it can bear, depending on the cyclicality of each economic activity in terms of vulnerability."

Sri Lanka's total credit is at the moment low compared to other countries in the region. It can increase if inflation and interest rates remain low over the longer term.

So Sri Lanka has at the moment has relatively lower levels of credit about 35 percent private credit to GDP (gross domestic product). So arguably as the economy grows that level of credit will increase to higher levels.

Thirty percent is a low number if it is compared to India's 55 percent. Indonesia is low, so is Philippines.

"So we would expect Sri Lanka to naturally grow quite rapidly from a credit perspective. But it just needs to be built on a sound footing on a stable economic environment. Then the economy in general can bear the credit that is built up on the system."

The bank consolidation process will also help the process by creating bigger and more stable banks that can lend larger volumes, he said.

"These types of forced mergers are not necessarily easy, and there are always bumps along on the road," Young said.

"You get parties who are forced to do that who would not necessarily do that otherwise. So there are risks in it. Bout from a broader perspective having larger stronger institutions that comes out o the process is clearly positive.