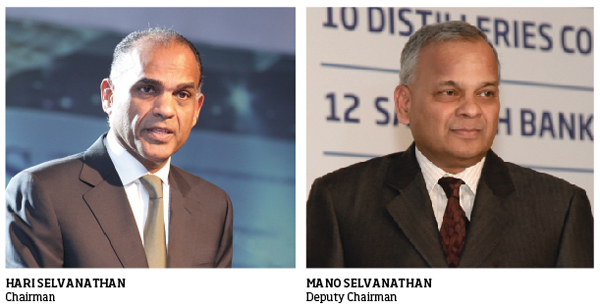 Complaint made to the SEC

A group of independent minority shareholders at plantation stock Bukit Darah Plc (part of the giant Carsons Group) has complained to the Securities and Exchange Commission (SEC) that a Carsons’ director had threatened a shareholder.

The hand-written complaint to Harshana Suriyapperuma, SEC Director of Corporate Affairs, claimed that Mano Selvanathan, Director Bukit Darah, had threatened shareholder S. Jegatheeswaran pointing the finger at the latter and telling him, “You be careful, I’m warning you”.

The issue emerged on the sidelines of the company’s annual general meeting on Thursday, July 31 at the Hilton Colombo, and a group of four shareholders – K.C. Vignarajah, S. Jegatheeswaran, Ms. Ruvani de Silva and Ms. G.Y. Pakeerally – immediately walked across to the SEC office at the World Trade Centre in Fort, hand-wrote the complaint and handed it over to Mr. Suriyapperuma.

Asked for his comments, Mr. Selvanathan didn’t deny that such an incident took place after the AGM was held. However he told the Business Times that the issue had been taken out of context. “After the meeting during tea time, I told Mr. Jegatheeswaran, whom I know well and, as I have seen him for the first time at this company’s AGM to be careful and not to be misled by inaccurate information, which was meant to be in the context that he should be studying the issues raised before commenting. There were few other shareholders including directors who also heard these comments,” he said.

“Then another shareholder asked me whether I was threatening Mr. Jegatheeswaran. I said no; what I meant was to study the issues before commenting. It is unfortunate that a conversation that took place after the meeting has been taken out of context. The SEC forwarded us the letter of complaint to which our Board will duly respond,” he said in response, adding: “Every year a particular shareholder raises these issues and we have been repeatedly responding.”

Dhammika Perera, Officer-in-Charge / Deputy Director General at the SEC, declined to comment on the specific issue of whether they had received such a complaint, adding, “The SEC doesn’t disclose details as to who makes complaints whether anonymous or otherwise.” However he pointed out that any complaint submitted – whether by a known party or anonymous or a whistle-blower – is evaluated to ascertain there is a prima facie case for action.

Mano and his elder brother Hari control the Carsons group which, through a web of holdings, has subsidiaries and connected interests in thriving palm oil plantations in Malaysia and Indonesia. Carsons also recently gained monopoly control of the beer business acquiring the 3 Coins brand and its assets from Cargills to add to its stable of brands like Lion Beer and Carlsberg.

Posts : 383
Equity Stars : 4064
Reputation : 16
Join date : 2014-03-06
Since there is the involvement of K.C, who is the person always go behind the cheap publicity, and cry as small investor in public and all know what he is doing behind the door

If you look by the direct holding in individual name, yes

Issue with the K.C is even at AGM's when he started to talk, he never allow others to talk, and most of the areas he talk in the AGM's not related to that company

Posts : 12
Equity Stars : 2463
Reputation : 0
Join date : 2014-08-07
K.C is a small fish compared to the Selvanathans. They just keep a very low profile and not many people are aware. The family owns around 80% of the entire group through a series of private holding company's. Easily in the top five richest in the country.

@greenback wrote:K.C is a small fish compared to the Selvanathans. They just keep a very low profile and not many people are aware. The family owns around 80% of the entire group through a series of private holding company's. Easily in the top five richest in the country.

Yes, they don't have much in their own name, but they have assets not only in Sri Lanka, but world wide