The Gross Effect: A Bond King, A 43% Gain And The Fading Bull Market

Yet, it may be time to put the cork into the champagne bottle. The road ahead for Bill Gross -- and the bond market -- is likely to be much more challenging.

Make no mistake, Bill Gross is one of the brightest minds in the bond business. His wise prognostications helped draw $270 billion into his firm's Pimco Total Return Fund (Nasdaq: PTTRX). And Janus executives hope he will have a similar magic touch at his new firm.

Even before his arrival, Janus rebounded from its tarnished dot-com legacy and now manages more than $30 billion in bond assets. According to various media reports, Gross will oversee Janus' Global Unconstrained Bond Fund (Nasdaq: JUCAX) -- which was launched in May 2014 -- and he will also help further develop the firm's fixed-income investment strategies.

An unexpectedly long rally
When I started on Wall Street in the early 1990's, my new colleagues expressed amazement that bonds had been rallying for nearly a decade. Little did they know that the bond rally would last another two decades, pushing interest rates down from post-war highs of more than 10% to post-war lows currently near zero. Suffice it to say, bond yields can't go much lower, unless they move into negative territory. 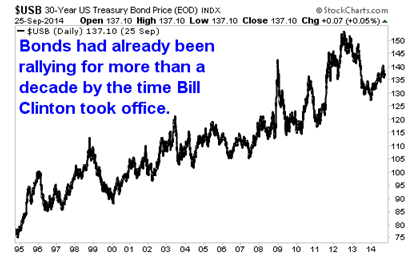 Simply put, demand for bonds will start to steadily weaken as interest rates start to rise.

Bonds and bond funds lose value as rates rise. Such losses are likely to wipe out any income bonds and funds may produce. Many investors will just step aside, cash out of their bond holdings and buy bonds again when it looks as if bond yields have stabilized at "normalized" rates. When will that be? It's hard to say.

Fed chairwoman Janet Yellen has talked of a very gradual shift in interest rates, and it may be four or five years before bond prices stabilize. Then again, if the U.S. economy grows at a faster pace in 2015, to around 3%, then the bond market may not show such patience.

Recall that two decades ago, the long-term bond rally was interrupted by "bond vigilantes," who pushed the 10-year yield to 8.0%from 5.2% over the 13 months ended November 1994. That move was triggered by bond traders that came to fear that a slow rise in interest rates would lead to an unsustainable rise in federal debt service costs. As a reminder, our nation still carries a tremendous amount of debt on its books, even as the budget deficit has been shrinking. The backdrop between now and 1994 is somewhat similar.

But let's pivot back to Bill Gross. What can he say to lure clients at Janus into bonds? Well, he can adroitly arbitrage global interest rates, which remain wildly divergent. For example, sovereign bonds issued by Turkey, Brazil and others carry much higher yields. Gross could try to convince clients to put a big portion of their fixed income investments into emerging market bonds. Few investors are likely willing to be sharply overweight these seemingly risky assets.

In effect, Gross has been put in an awkward position. He's been tasked with generating enthusiasm for Janus' bond funds, even though he knows that bonds are poorly positioned for the coming changes in Fed policy.

Risks to Consider: As an upside risk, the U.S. economy could slow down in 2015, which would push bond yields down and bond prices up. That would make Bill Gross' life a lot easier.

Action to Take --> Hiring Bill Gross is clearly good news for Janus -- and its shareholders. But it's unclear if such a move should translate into nearly $1 billion in newly-created market value. More to the point, the 30-year bond rally is on its last legs, and investors shouldn't see Gross' employment switch as a sign that bonds hold fresh appeal. He's a smart man stuck in a deflating asset class. Still, he can be counted on for solid insights, and it's worthwhile to continue tracking his views about the bond market. If you were lucky enough to own shares of Janus going into this news, then this would be a great time to book profits. And if you have significant exposure to long-term bonds, I recommend you follow resident-income investor Amy Calistri's advice and trim your holdings.

This article originally appeared on StreetAuthority.com: The Gross Effect: A Bond King, A 43% Gain And The Fading Bull Market