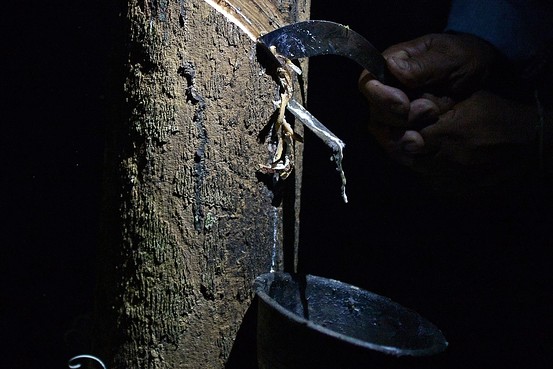 A Thai farmer cuts a rubber tree to bleed its white sap at his rubber plantation in the Ka Po village of the southern Thai province of Phang Nga. Agence France-Presse/Getty Images

The National Rubber Policy Committee suggested that the government buy natural rubber from local growers in an effort to boost prices.

Thai rubber export prices have fallen more than 30% this year to five-year lows as global stockpiles outpace demand. Thailand is the world’s largest producer and exporter of natural rubber, which accounts for about a third of output world-wide, rubber industry data showed.

The issue of intervention to protect commodity prices is sensitive in Thailand, with a now-defunct rice subsidy program having contributed to the ouster of the previous government in May.

State-run Bank of Agriculture and Agricultural Cooperatives could lend up to 30 billion baht ($925 million) to the Rubber Estate Organization—under the Ministry of Agriculture—to buy rubber from the market and sell it to the government, said Deputy Prime Minister Pridiyathorn Devakula, who is also a vice chairman of the committee.

The government, which already has advanced purchase orders, will be able sell the stocks later to boost prices, Mr. Pridiyathorn said. He didn't provide details of those purchase orders.

The committee also approved a one-time payment worth a total of 8.5 billion baht ($260 million) to help 850,000 rubber farmers.

“These two measures are expected to help shore up the prices,” Mr. Pridiyathorn said after the meeting. The panel plans to increase the price by up to 30% to 60 baht per kilogram within the next two months.

Mr. Pridiyathorn said the panel will propose these measures for the Cabinet’s approval next week.

The panel also approved a one-time payment worth a total of 8.5 billion baht to help rubber farmers.

The short-term aid is similar to that previously approved for rice farmers.

“The rubber prices this year are very low, so when small-scale rubber growers ask for help, we have to help them,” he said.

Rubber farmer Weerasak Painupong, 43, said the payment is a drop in the ocean. “It’s better than nothing but it doesn’t help much. Essentially, farmers want to see rubber prices much higher up.”

Some groups of Thai rubber farmers earlier demanded the government raise the price to 80 baht per kilogram and provide a one-time cash handout of $78—double the panel’s suggested amount.

For the longer term, the panel said it would propose that the government approve low-interest loans for rubber farmers who want to plant other crops to improve their livelihoods.

@SHARK aka TAH wrote:Where is the Bottom of Rubber Price

Need some analysis to find, BROTHER

But effected by uncontrollable price fluctuations.

When buying plantations check their product mix in the short term.

Posts : 38
Equity Stars : 2516
Reputation : 1
Join date : 2014-10-18
The DIPD factory in Thailand produces medical gloves. With the Ebola virus causing so much concern now there'll be a greater demand for their products.

Maybe this is one reason for the renewed interest in DIPD?

Maybe this is one reason for the renewed interest in DIPD?

Re: Thailand Plans Aid to Rubber Farmers as Prices Fall