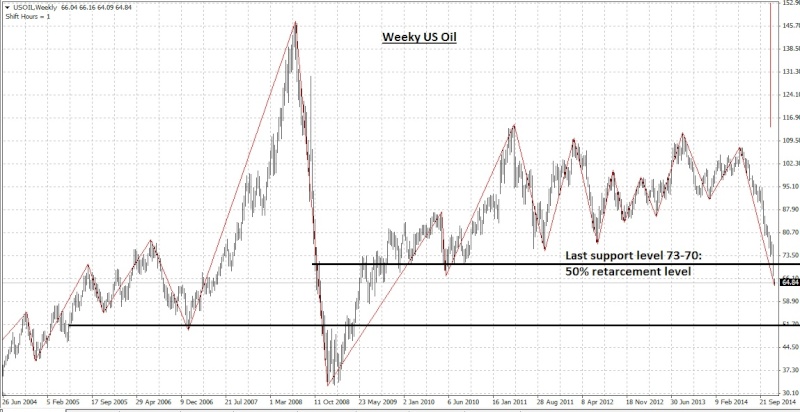 OPEC heading for no output cut despite oil price plunge


(Reuters) - OPEC Gulf oil producers will not propose an output cut on Thursday, reducing the likelihood of joint action by OPEC to prop up prices that have sunk by a third since June.

"The GCC reached a consensus," Saudi Arabian Oil MinisterAli al-Naimi told reporters, referring to the Gulf Cooperation Council which includes Saudi Arabia, Kuwait, Qatar and the United Arab Emirates. "We are very confident that OPEC will have a unified position."

"The power of convincing will prevail tomorrow ... I am confident that OPEC is capable of taking a very unified position," Naimi added.

A Gulf OPEC delegate told Reuters the GCC had reached a consensus not to cut oil output. Three OPEC delegates separately told Reuters they believed OPEC was unlikely to take any action when the 12-member organisation meets on Thursday after Russia said it would not cut output in tandem.

The OPEC meeting will be one of its most crucial in recent years, with oil having tumbled to below $78 a barrel due to the U.S. shale boom and slower economic growth in China and Europe.

Cutting output unilaterally would effectively mean for OPEC, which accounts for a third of global oil output, a further loss of market share to North American shale oil producers.

If OPEC decided against cutting and rolled over existing output levels on Thursday, that would effectively mean a price war that the Saudis and other Gulf producers could withstand due to their large foreign-exchange reserves. Other members, such as Venezuela or Iran, would find it much more difficult.

Naimi said earlier on Wednesday he expected the oil market "to stabilise itself eventually", after talks with non-OPEC member Russia on Tuesday yielded no pledge from Moscow to tackle a global oil glut jointly.

The UAE sided with Naimi, saying oil prices would soon stabilise, while ramping up pressure on non-OPEC nations.

"This is not a crisis that requires us to panic ... we have seen (prices) way lower," UAE Oil Minister Suhail bin Mohammed al-Mazroui told Reuters.

"The oversupply came from the evolution of the unconventional oil production ... I think everyone needs to play a role in balancing the market, not OPEC unilaterally," he said.

Iranian Oil Minister Bijan Zangeneh said some OPEC members, although not Iran, were now gearing up for a battle over market share.

"Some OPEC members believe that this is the time where we need to defend market share ... All the experts in the market believe we have oversupply in the market and next year we will have more oversupply," he added.

The group could opt to roll over output levels but stress the importance of better compliance, while also agreeing to hold an extraordinary meeting if prices keep falling, a Gulf OPEC delegate and several OPEC watchers said.

Among the members of the Organization of the Petroleum Exporting Countries, Venezuela and Iraq have called for output cuts. OPEC's traditional price hawk Iran said on Wednesday its views were now close to those of Saudi Arabia.

Zangeneh said there was unity inside OPEC to "monitor the market carefully" but made no mention of a cut.

Russia, which produces 10.5 million barrels per day (bpd) or 11 percent of global oil, came to Tuesday's meeting amid hints it might agree to cut output as it suffers from oil's price fall and Western sanctions over Moscow's actions in Ukraine.

But as that meeting with Naimi and officials from Venezuela and non-OPEC member Mexico ended, Russia's most influential oil official, state firm Rosneft's (ROSN.MM) head Igor Sechin, emerged with a surprise message - Russia will not reduce output even if oil falls to $60 per barrel.

Sechin added that he expected low oil prices to do more damage to producing nations with higher costs, in a clear reference to the U.S. shale boom. On Wednesday, Russian Energy Minister Alexander Novak said he expected the country's output to be flat next year.

Many at OPEC were surprised by Sechin's suggestion that Russia - in desperate need of oil prices above $100 per barrel to balance its budget - was ready for a price war.

"Gulf states are less bothered about a price drop compared to other OPEC members," an OPEC source close to Gulf thinking said.

OPEC publications have shown that global supply will exceed demand by more than 1 million bpd in the first half of next year.

While the statistics speak in favour of a cut, the build-up to the OPEC meeting has seen one of the most heated debates in years about the next policy step for the group.

"The idea of unleashing a price war against U.S. shale oil seems strange to me. I doubt you can win this battle as most U.S. oil producers are hedging a lot of their output," said a top oil executive visiting Vienna for talks with OPEC ministers.

(Reuters) - Following OPEC’s decision on Thursday to leave production unchanged, Brent crude futures experienced the first three-standard deviation down-move since the flash crash of May 2011 and before that the depths of the recession in March 2009.

With U.S. markets and financial institutions closed for the Thanksgiving holiday, limited liquidity probably exaggerated the scale of the move.

It was nonetheless indicative of the tremendous uncertainty around the market about how OPEC's members would handle a lose-lose situation:

In the event, the organization opted to defend market share, causing prices to fall abruptly as traders absorbed the strategy’s implications.

It is important not to read too much into a single day’s move.

The sharp drop on Thursday could signal a one-off adjustment to a reduced price level, with volatility then returning to a low level. Or it could signal the start of a prolonged period of greater uncertainty and volatility.

Daily price movements in oil and other commodity markets do not follow a normal distribution. (link.reuters.com/gyq53w)

Instead, the distribution is leptokurtic: there are more days with either very small movements or very large price movements than would be predicted by the normal distribution, and fewer days with medium-sized ones.

Moreover, the level of volatility in oil prices is itself volatile. Periods of low volatility alternate with periods of high volatility, with abrupt shifts between the two states.

Financial markets shift between “mild” and “wild” states, as the French mathematician Benoit Mandelbrot demonstrated, originally with an analysis of cotton prices.

Thursday’s price move signals a shift to a wilder market state after a long period in which volatility has been extraordinarily subdued.

There is no way to know how long the wilder state might persist.

But there are good reasons to think oil prices could be more volatile in the months ahead than they have been over the last three years.

First, there is a much greater dispersion of views about the trajectory of prices over the next two years than at any point since 2010.

But there is enormous uncertainty about how low and how long prices might have to fall to shut in excess shale production.

The reaction function of U.S. shale producers is untested and will only be known after the event.

Second, OPEC’s own response remains unclear in the medium term.

Saudi Arabia, Kuwait and the United Arab Emirates, the only members able to make significant production cuts, have revealed that they prefer instead to play a long game, relying on low prices to recapture market share from higher-cost shale rivals.

The core Gulf producers have the financial resources to withstand a prolonged period of lower prices by drawing down reserves. But even their resources are not unlimited. And prices could stay lower for longer than most producers now expect if shale output is more resilient than OPEC forecasts.

Since the start of the shale boom, OPEC and Saudi Arabia have consistently underestimated its disruptive impact on supply and price. It is possible they are now over-estimating how quickly shale output could stop growing. (“OPEC and the shale revolution” Oct 2014, link.reuters.com/byq53w)

Third, Iran’s oil exports seem set to rise as the stranglehold of sanctions weakens, even without a nuclear deal with the United States, though the pace at which sanctions become more leaky is hard to predict. Additional Iranian exports will weaken the market further.

Fourth, the global economy is slowing, and on this occasion the slowdown is affecting China and the other Asian countries that were the only source of demand growth for oil exporters in the last five years, adding an extra element of uncertainty.

Fifth, there may have been some structural loss of liquidity in the market as banks and hedge funds scale back in the face of stricter regulations and the lack of profitability in recent years.

Liquidity provision is itself cyclical. After a period of high liquidity, when the oil sector was crowded by lots of banks and hedge funds seeking to speculate or make markets and competing away the profit margin, the market is now in a period of much lower liquidity, and the adjustment may not be over yet.

The upshot is that after three years in which volatility has been abnormally low by historical standards, there are plenty of reasons to think prices might start jumping around more than before as the market struggles to find a new temporary equilibrium.

Re: Good time for LIOC & LGL: Oil market reveals its wild side again. Now its 64