» POSITIVES & TARGETS BY IMTIAZ BUHARDEEN
by ChooBoy Yesterday at 9:30 pm

Patali, Rathana Thero doing a great service to educate the rural voters in a language they understand simply.

SHARK aka TAH wrote:Patali, Rathana Thero doing a great service to educate the rural voters in a language they understand simply.

How about these comments. Thero is be too aggressive. But all comments are true.

“The only way to make sense out of change is to plunge into it, move with it, and join the dance.” ~ Alan Watts

One more week for the Presidential Elections. The people of Sri Lanka are being asked to make a decision and it’s going to be the most crucial political judgment they have been challenged to make.
Bewildered by the unprecedented crossovers from both sides, the voters are still meandering between this valley and other peaks, wondering whether the incumbent is really serious about restoring the fast-disappearing socio-cultural values. While the leaders are pontificating from the top of their voices about Buddhism and its abiding influence on the psyche of the great majority of Sri Lankans and its values, they are also resorting to the most dastardly acts of violence, inhuman treatment of minorities and distorted sloganeering of sublime concepts.

Only a desperate clan of rulers would resort to such extreme falsehoods; only a losing side would adopt such brutally bizarre and blatantly shallow methods of persuasion. On every one of their election platforms, speaker after seeker is given a wide range of elasticity to stretch the truth; a third-rate but widely popular Bollywood actor is being shown on their election platforms, for what earthly purpose, one really does not know. It reminds one of the absolutely insensitive racing-car festivals these guys held in Colombo and Kandy when the average citizen is finding it almost impossible to put three meals on the table on a daily basis.

It is quite obvious that the ruling clan is caught up in its own web of deceit; its extravagant spending and getting buried in their own muck and misery is evidenced in the bizarre way some of their supporters are behaving. Once again, the moving drama of Sri Lankan political dynamics is showing its dumbfounded audience the utter fallacy of temporary glory; every reasonable human being could comprehend what precisely is happening around him but those who still wield power seem to think that that power would remain in their hands forever.

Some of the beneficiaries of this evil regime have chosen to remain there, not because they don’t see the coming disaster but as they are not welcome in the Opposition ranks because the Opposition fears that they (the Opposition) too will be tarred by the same brush of these wildly corrupt and unruly lackeys. The hooligans who got elected to Parliament on the United People’s Freedom Alliance (UPFA) ticket are still playing ‘pandu’. The infamous Muthuhettigama incident and the deafening silence by the President on the same is ample evidence that Mahinda Rajapaksa has no control over his henchmen and women. Stories that run through the web are not only funny; some of them really have been brilliantly created and would surely persuade some voters to change their minds, even at the eleventh hour.

Perhaps now it may be a good time to assess the two campaigns. The contrasts are much more definitive than similarities. On the one hand, the Mahinda Rajapaksa campaign has had almost unlimited access to cash, muscle and power; the Maithripala campaign sometimes looked woefully short in cash but immensely rich in ideas, substance and of course style. The former’s obscene campaign of cutouts of their candidate, much to the annoyance of any intelligent person, played havoc during the run-up to the nomination day.

The following chart gives the reader a picture of how the two campaigns have fared according to the writer’s personal opinion. Many readers might disagree with my reading, yet I’m sure, most of them would agree with the assessment so given. 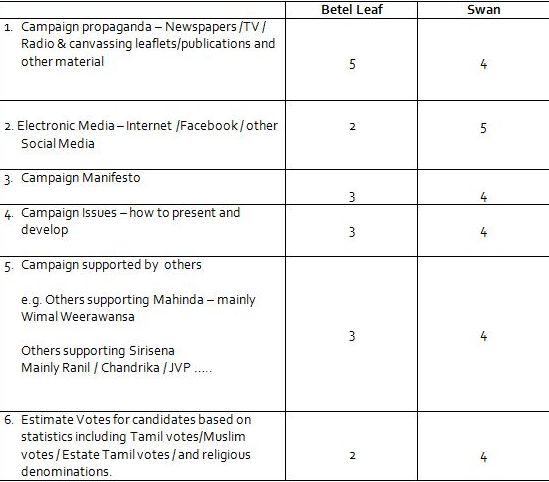 The blatant lies uttered by the Rajapaksa campaign are nauseating and the uncaring ease with which they are spoken, are crude and thoroughly despicable. However, elections that are won by sustaining a campaign of lies and half-truths are many, not only in the so-called Third World but more so in the developed West. But the Rajapaksas take all credit for lying in great style. They can take Goebbels of the Hitler regime to school.

But come January 8, 2015, the people of Sri Lanka will decide to oust the Rajapaksas for many valid reasons, the most prominent of which, not necessarily in the order given, are the following:

Predictions don’t belong in the arena of politics. They belong exclusively to astrologers and extraterrestrial readers. But scientific forecasting is done by professional organizations using various polls and surveys. The writer has access to such polls done during the period of December 18 – 23 and according to that particular survey, Maithripala Sirisena is ahead comfortably going over the 50% mark. For reasons of confidentiality, I do not wish to divulge the name of the polling company.

anybody knows the news...?