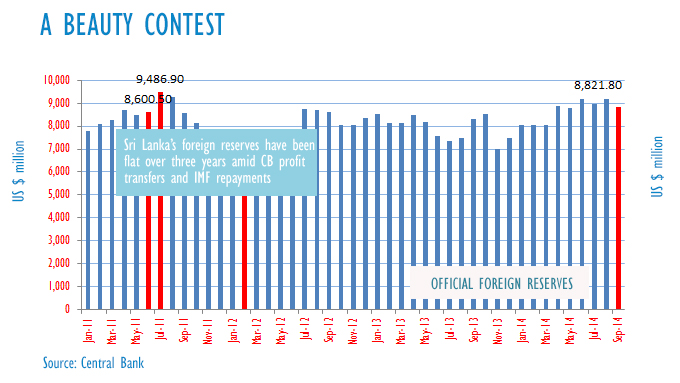 COLOMBO (EconomyNext) - Sri Lanka has seen its foreign reserves grow back to record volumes over the past two years as domestic credit slowed, but ultra-low rates and repayments to the International Monetary Fund are taking their toll.

Now domestic credit is picking up and nominal interest rates are at historic lows, making it more difficult for the Central Bank to hold on to collected reserves (Why do nominal rates matter? – the problem of PIGS countries).

Balance of payments troubles, foreign reserve movements and exchange rate troubles are money and credit phenomena and have nothing to do with trade. In countries like Sri Lanka, where Mercantilism goes for 'economics' most people attribute foreign exchange troubles to trade deficits.

In the past year for example, the trade gap moderated due to weak bank credit. As domestic credit slows and liquidity builds up, foreign reserves tend to grow in tandem with dollar inflows not being spent by people and firms within the country.

But when credit growth picks up, the money 'saved' by one person is spent by another via rising bank creidt boosting economic activity and ultimately imports.

The reason we lost foreign reserves in 2011 and 2012 was because credit was strong and the Central Bank added liquidity through printed money into the banking system to sterilize foreign exchange sales, expanding domestic demand to unsustainable levels.

Then the Central Bank was able to rebuild the nearly two billion dollar of foreign reserves lost during the 2011/2012 balance of payments crisis. Forex reserves hit 9.185 billion in August 2014, which is a gain of $2.41 billion since the January 2012 float.

Some of these reserves are permanently locked up, as they were built by the outright sale of Treasury Bills held by the Central Bank in to the banking system, in sterilized foreign exchange purchases and banks cannot loan the rupee proceeds to the economy.

It was with the purchase of these bills that money was printed to generate the balance of payments crisis in the first place, in deadly sterilized forex sales.

But now the Central Bank has run out of Treasury bills. And unlike in the past it is no longer issuing its own securities in large quantities.

Instead a large volume of liquidity has been mopped up temporarily by term auctions. According to Central Bank data 351.5 billion rupees of liquidity is dammed up by term repo auctions.

But this dam is porous, unlike the outright sales of Treasury bills. Each time a term auction matures, banks will start to lend the money to customers, boosting demand and imports, potentially taking the foreign reserves backing the liquidity with them when the exchange rate is defended.

This liquidity on the liabilities side of the balance sheet of the Central Bank represents about 2.4 billion dollars of foreign reserves in the asset side.

These reserves are inherently unstable. The central bank’s new rule of giving a lower interest rate on the overnight liquidity withdrawal window is also an anti-foreign reserve policy.

In August banking system commercial bank credit went up to 47 billion rupees from low or negative levels in earlier months. When the credit given by the banks match the deposits taken by banks, it is not possible for the Central Bank to build new foreign reserves, except through the interest earnings of its own foreign reserves.

The rupee will come under depreciating pressure, instead of downward pressure it has seen in the past year. The Central Bank will then have to sell down reserves to prevent the rupee depreciating.

There is nothing wrong with that.

Indeed the central bank should sell down reserves to keep the peg. No advantage will be gained by depreciating the rupee, since the problem is with the temporarily dammed up excess liquidity and no 'economic fundamenal' as such. If not Sri Lanka's rupee will behave like yet another Bretton Woods or post Bretton Woods, third world 'crawling peg'.

Dollar sales will mop up excess liquidity and foreign reserves will be depleted somewhat.

This will put upward pressure on interest rates. This pressure should not be resisted with liquidity injections, precipitating a balance of payments crisis. The most dangerous action a central bank can engage in is sterilized foreign exchange sales. This is what Latin American and other third world weak exchange soft pegged central banks do.

There is another problem. That is the International Monetary Fund repayments. Those payments are made directly off foreign reserves. There is no way to recover those forex reserves through actions in the domestic credit markets or liquidity.

The grace periods of many Chinese loans disbursed during the last four to five years are now running out and government debt repayments are also going up. If the Central Bank settles a Treasury foreign liability and takes Treasury bills as 'payment' it can sell down the bills, mop up liquidity, curb domestic credit and rebuild the lost reserves.

But IMF money is simply paid to settle an earlier loan taken directly by the Central Bank. There is no way to recover them by mopping up domestic liquidity.

That is a drop of $363 million in a month. Next year Sri Lanka has to repay 369 million Special Drawing Rights to the IMF which is about 540 million dollars at current exchange rates.

Reserves will not fall unlike during a balance of payments crisis. Early next year, for example a sovereign bond sale is expected. Some of the proceeds will go to repay an earlier bond.

The rest will boost foreign reserves - but temporarily - until the liquidity is spent by the government and then through the banking system.

Sri Lanka does not need billions of dollars of foreign reserves. All it needs is enough dollars and a little over to cover the domestic monetary base or reserve money (about 553 billion dollars the time of writing) at the current exchange rate (Rs130), which is about 4.2 billion dollrs, provided the Central Bank is willing to raise interest rates when credit picks up, and reserves start t fall.

But that is not the way international investors and others look at foreign reserves.

They look at debt repayments, imports and other factors, an attitude which is understandable, given that soft-pegged central banks are notoriously late in raising rates.

Most foreign investors feel comfortable when there are large reserve volumes as a ‘buffer’ despite these buffers disappearing like smoke when credit is strong and sterilized foreign exchange sales are made.

To win in this beauty contest, skilful 'make up' in the form of foreign reserves is needed.

High central bank profit transfers to the central government budget - some made from gold trading - have depleted reserves and reduced the ability to repay IMF loans.

Now gold prices are also falling. Early next year, the budget and election releted handouts will also kick in.

The full effect of the spending outlined in the October budget comes on stream next year. It is one thing to run a deficit of 7 or 8 percent of gross domestic product when Treasury yields are around 10 or 12 percent a year.

There may not be that much pressure on the exchange rate or foreign reserves or inflation at those interest rates, when ordinary people will save more and spend less.

But at 6 percent interest rates, even a deficit of 4 to 5 percent of GDP may have the same effect on the broader credit system as a 7-8 percent of GDP deficit. Rating agencies and others may not realize this.

Furthermore the state and state enterprises are actually borrowing more money through Treasury guarantees. The actual deficit - and therefore its effects on the economy - would be higher.

International commodity prices are low, and the trigger for the 2011 BOP crisis of bank-funded-central-bank-accommodated energy subsidies is unlikely to occur in 2015, but stronger private credit and historically low interest rates will weigh in as negative factors.

The 2 billion dollars, Chinese Central Bank swap also helps. But the central bank itself has given swap cover to private borrowers.

Because there are foreign investors in rupee and dollar bonds, Sri Lanka can no longer take the chances it did in earlier years, say 10 years ago.

If Sri Lanka is not able to rollover maturing bonds, in any given year foreign reserves will fall very sharply, though a buffer is there.

That means the Central Bank will have to stand ready to raise interest rates.

Treasuries, sell them down, take a one-time hit and permanently lock up some reserves. And do not make any more Central Bank profit transfers to the budget. But most of all the Central Bank should not intervene in interest rates.

It should watch credit, watch foreign reserves and the exchange rate and refrain from keeping rates down when excess liquidity runs out.

This article is based on a column which appeared in last month's issue of the Echelon Magazine.