» What will happen tomorrow?
by Wickyz Yesterday at 6:34 pm

In November, President Mahinda Rajapaksa announced the country would go to the polls on January 8 - nearly two years ahead of schedule - in an attempt to seek a fresh mandate amid waning popularity. In a dramatic turn of events following the news, Rajapaksa's health minister Maithripala Sirisena quit to become the president's rival candidate, backed by the leading opposition party United National Party (UNP).

Sirisena, who was also general secretary of the ruling party, is now running an opposition coalition calling for constitutional reforms to limit executive power and restore independent bodies to monitor civil service, judiciary and human rights.

"Amid Sri Lanka's authoritarian drift and institutionalized impunity, that a real political competition is in the offing provides unexpected hope for the future," said the International Crisis Group (ICG), a non-governmental organization (NGO) aimed at resolving deadly conflicts, in a December report.

A survey by The Center for Policy Alternatives (CPA), a Colombo-based think tank, found that 76 percent of respondents believed Sirisena would win if elections were held immediately.

The 69-year old Rajapaksa has ruled for two consecutive terms since coming to power in 2005 and negative public sentiment is growing. Complaints include dynasty politics, rampant corruption, concentrated power in the hands of the president, ethnic conflict and the soaring costs of living, according to the ICG.

"Economic development has focused on expensive infrastructure projects that have produced few jobs, while public services - schools, universities, and the health system - have been underfunded and allowed to deteriorate," the ICG said.

Meanwhile, an 11-month drought has seen sharp increases in food prices, with rice - a staple food - surging 36 percent on year by the end of September, according to United Nations data. 43 percent of citizens stated they've cut back on the amount or quality of purchased food this year, the CPA said in an October report.

The treatment of Tamil minorities also remains a hot-button topic as the group continues to face human rights violations despite the end of a 25-year long civil war with the majority Sinhalese in 2009.


Who's better for the economy?

Deutsche Bank notes that the Sri Lankan economy will continue growing irrespective of which party comes to power as long as order reigns.

"The key for Sri Lanka is to achieve political stability and continue with growth-critical reforms that are in the long-term interest of the country. Tourism, which is the backbone of the Sri Lankan economy and attracts the maximum foreign direct investment, cannot thrive in an environment marked by political unrest," the bank stated in a December report.

Despite the criticism aimed at Rajapaksa, the island has thrived under his term, with 2014 gross domestic product (GDP) growth of nearly 8 percent.

"The last five years have proved to be transformational for Sri Lanka...Barring China, Sri Lanka's average growth outturn of 7.5 percent between 2010-14 has been higher than all Asian economies during the corresponding period," Deutsche Bank said in a December note, adding that the stock market has given a cumulative return of 300 percent in U.S. dollar terms from 2009 to 2014.

"If Rajapaksa secures a third term, he is likely to continue his existing policies, namely large-scale infrastructure development (with a preference for Chinese investment), export-oriented growth, and hydrocarbon exploration and production," said Asad Ali, country risk analyst at IHS.

A new term for Rajapaksa will also lead to a reinforced emphasis on expensive populist measures, such as public sector wage increases, added Ali, which will put further pressure on government borrowing.

Public debt stood at around 78 percent of GDP in 2013, one of the highest among emerging economies, according to the International Monetary Fund. In a report published in September, the organization suggested authorities target a gradual reduction to 50 percent of GDP, relying on primarily revenue measures.

Should Sri Lanka's market be on your radar after its strong start to the year bucked the downtrend in most emerging markets?

The Colombo market's All-Share Index has tacked on around 4 percent so far in January after gaining nearly 5 percent in 2013, even as many of its regional counterparts have lost ground.

Additionally, while many regional markets experienced outflows of foreign funds last year amid concerns over tighter liquidity after the U.S. Federal Reserve first broached the idea it would begin to taper its asset purchases, the Colombo market saw net foreign inflows of almost 22.9 billion Sri Lankan rupees in 2013.

Some regional markets have raised interest rates to try to prevent fund outflows, but Sri Lanka has been lowering its rates.

He expects the economy will grow around 8 percent in 2014, citing two major developments: the end of the civil war in 2009 and the repositioning of the economy toward services.


"We have developed our infrastructure, particularly the ports and airports, which means our services have now improved quite dramatically. And we are seeing the services sector, particularly the hubs we are looking at -- maritime, aviation, knowledge, activities as well as the commercial and energy -- all now contributing a lot more to our economy than they did in the past," he said.

The stock market itself is working to attract more foreign investors, embarking on development initiatives including requiring listed companies to keep more of their shares available for trading, as well as improving broker infrastructure, strengthening regulation and developing the corporate bond market, Rajeeva Bankaranaike, the CEO of the Colombo Stock Exchange, told CNBC.

He believes his market offers a lot of value for investors.

(Watch: Frontier markets are set for two decades of growth: Pro)
"It's the growth story," he said. "Some of these sectors are trading at deep discounts. Particularly in the Sri Lankan economy, we have some of the growth sectors very well represented and these are trading at deep discounts to the market P/E (price-to-earnings ratio)," he said, citing the construction, energy, property and manufacturing sectors.

Investors are responding to the lure.

"We are positive on the outlook for equities in the current year," said John Keells Stock Brokers and CIMB in a note, citing an improved earnings outlook and expectations lower rates will spur more funds toward the stock market. They expect the All Share Index will rise at least 15 percent this year, with scope for earnings multiples to rise along with earnings growth, which it estimates at around 15 percent for the year.

"As Sri Lanka comes out of its tightening cycle there is also an extremely strong pipeline of private investment into leisure and property megaprojects over the next five years, unprecedented in their scale and scope in Sri Lanka which should significantly improve sentiment."

To be sure, the view on the market isn't universally positive. HSBC only rates the market at "neutral" in its frontier market coverage.

"Macro developments have yet to translate into improved business prospects," it said in a note.

"Sri Lanka has failed to attract much-needed FDI (foreign direct investment), and consumer spending remains sluggish. The problem appears to be delays in infrastructure projects, which are having a knock-on effect on the broader economy," it said, adding the country has a high current account deficit and overdependence on imported fuel.

salman khaan is gonna take this country to the next level

For a one housing project he spend around 12 lks for a banner. Its real value is 24000

for Gold City in petta he paied more then 4mil for Bathiya to the opening. 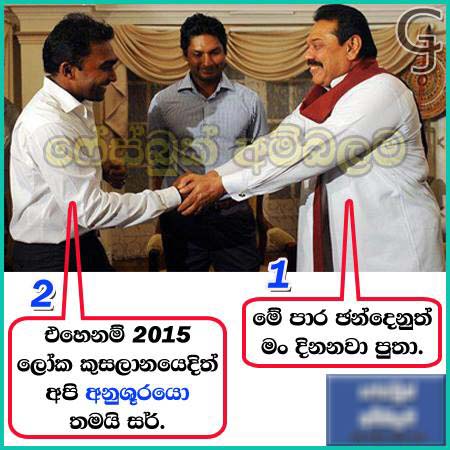