» GLAS will be winner with Super Gain.
by Promoney Today at 11:03 am

» What will happen tomorrow?
by Promoney Today at 10:20 am

» Synergies of possible merger between Sampath Bank and PABC
by Walbaba Today at 7:59 am

During the last two months Ranil Wickremasinghe’s Government appointed so many corrupt officials with dubious histories to various Government organizations.

Chandu Epitawala is no different. 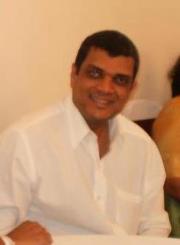 In 2012 Chandu Epitawala had to resign from SEC because of a corrupt deal which got exposed.

Chandu Epitawala had obtained money from a Japanese Investor who was given a licensee as a Stock Broker (NWS securities). He had visited Japan on SEC account to conduct his private business discussions. He had a secret deal with the Japanese investor to pay him a monthly fee for the services he was rendering as an insider of SEC.

A file containing all the correspondences between this Japanese Investor and Epitawala was handed over to SEC in August 2012, through a third party by the disgruntled investor. The investor said until then he didn’t want to pursue this as Chandu Epitawala had the protection of former Chairman Tilak Karunaratne was removed from Chairmanship

An independent lawyer Gazali Hussein appointed by SEC to look into this matter recommended commission to do a formal inquiry and take action against Epitawala as the case was quite clear from the correspondences.

However having realized that he was trapped, Epitawala pleaded with then commission and resigned from the post before the investigation was commenced.

The commission unfortunately decided not to pursue the matter any further because they were worried that undue publicity to such an incident would have further affected reputation of SEC which was already damaged due to Tilak Karunaratne’s foolish way of media handling.

So this is the ROGUE  Ranil and Tilak want to bring Back to SEC.

Each and every member of the new commission should take personal responsibility for this decision if they approve the appointment of a person who had to leave the organization under those circumstances.

Passed out from Royal College in 1979 and went Switzerland to pursue languages and a course in Hotel Management. Later in 1989 went US to pursue University education. Obtained bachelors degree from Hawaii Pacific University and MBA from University of Texas at Arlington. On his return in 1995, Chandu Epitawala joined a fund management firm and later got seconded to DFCC bank. In 2000 went to Seychelles to manage funds for a wealthy individual. On second return in 2002, joined Public Enterprises Reforms Commission (PERC) the privatizing arm of the government. After four years there, in 2005 joined the Securities and Exchange Commission where he work at present devastated the stock market by writing a 'Concept Paper on 10% Price Band which he submitted to SEC' according to insiders.