Guard Your Portfolio With Defensive Stocks

A defensive stock is one that investors tend to want to own during uncertain times, and one that they definitely want to own during hard times. These are also deemed as non-cyclical stocks, so they are not as dependent on the overall economic cycle like certain tech stocks, and consumer discretionary or durable good makers.

They tend to outperform cyclical stocks in hard times, but they usually are not the stocks of choice during the upswings in the business cycle. If you think of certain aspects of the three basic requirements of life (food, clothing and shelter), you have aspects of all three that comprise a defensive stock. In this article, we'll provide an overview of defensive stocks and show you how you can use them in your portfolio.

Why Defensive Stocks?
Some may ask, "If times are hard or if things are getting shaky, why would anyone even want to own a stock? Why not just go for the safety of a Treasury bill, which essentially has a risk-free rate of return?" The answer is quite simply that fear and greed can often drive the markets. (To keep reading about this subject, see When Fear And Greed Take Over and Master Your Trading Mindtraps.)

Defensive stocks accommodate greed by offering a higher dividend yield than can be made in low interest rate environments. They also alleviate fear because they are not usually as risky as regular stocks and it usually takes a major catastrophe to derail their business model. It should also be known that most investment managers have no choice but to own stocks, and if they think times are going to be harder than normal, they will migrate toward defensive stocks.

So what are some sectors that would be deemed defensive? For starters, you can use the rule that if you can eat it, drink it or smoke it, then it is defensive. (To read more about sectors, see Sector Rotation: The Essentials, Where Top Down Meets Bottoms Up and the Industry Handbook.)

Foods, Beverages and Tobacco Products
Despite this eat, drink or smoke perception and despite modern-day developments, tobacco shares have miraculously never disappeared or been wiped out. Not all food companies are actually defensive stocks, but a good rule is that if the bulk of the sales comes from grocery stores, the stock is probably a defensive one.

Restaurant chains that cater to middle and upper-middle level incomes are not defensive plays at all, because a family can quite easily stay home for dinner two nights more per week instead of going out. Lower-end restaurants or fast food chains are somewhat defensive because people still have to eat and they can often feed a family at a lower cost there than they can at home. What commonly happens in most "bust" parts of the business "boom and bust cycle" is that consumers will just spend less going out no matter what and will try to spend money to eat at home.


Hence, the food manufacturers are the true defensive plays. Alcoholic beverage companies, bottled beverage companies, and water companies are all deemed defensive stocks. People still have to drink water, kids and adults will still spend on the sodas, and it is arguable that in hard times people will drink alcohol even more. (To read more about the cyclical nature of the markets, see Understanding Cycles - The Key To Market Timing and The Ups And Downs Of Investing In Cyclical Stocks.)

Utilities and the Houses the Service
Water, gas and electric utilities are also deemed defensive stocks. How many people in the population will live inside their houses without electricity, gas and water? Perhaps some, but very few. The utility companies are thought of also benefiting from slower economic environments because interest rates tend to be lower and their competition to borrow funds is much less.

In the past ,your telephone 'utility' was deemed as a defensive stock, but the problem with this argument now is that telecom competition is no longer deemed a utility. Most markets tend to have one choice for power and gas, but now the competition with competitive local exchange carriers (CLEC), cable companies, wireless and copper line phone companies has altered this stigma.

The reason an apartment REIT is defensive is because of the need for shelter, and as long as these are not ultra-high-end apartments, you can imagine that if people have to live anywhere besides a homeless shelter,they will choose to live in an apartment. These also offer higher dividend income than treasury rates at almost all points of the business cycle. REITs are now much more common than they were 20 and 30 years ago, but in the modern world and for the foreseeable future these will still be around. (To find out more about the utility and housing market, see Commodity Prices And Currency Movements, Fueling Futures In The Energy Market and Exploring Real Estate Investments.)

Drug stocks are also part of a historic defensive stock sector. This has greatly changed through time because of drug companies relying heavily on major drugs that often have problems discovered down the road or because of new branded and generic competition that didn't exist back in the early 1990s and before. (To learn more, see Measuring The Medicine Makers.)

Generic drug makers may be the "new defensive" plays in modern times, but anyone who has owned either generic drug companies or "big pharma" drug companies over the last 10 to 12 years can affirm that this defensive stock stigma is not as true as the classical business models used to indicate.

Perhaps you can lump "other medical" companies into this fray because society will still seek medical improvements, but if they have to spend their own money, that might not hold true and many of the device manufacturers haven't put in the decades and centuries of these classical models remaining true.

Sizing Up Defensive Stocks
The key characteristics that you can use to describe defensive stocks are typically low price-to-earnings ratios (P/E) and a low beta values. (Find out more about beta in Beta: Know the Risk and Beta: Gauging Price Fluctuations.)

The P/E tends to be lower for defensive than for cyclical stocks, throughout the turns of a business cycle. The low beta, or relative risk and performance to the market, will show that these stocks tend to either perform better - or at least not as poorly - as cyclical stocks in bad times and will usually not be most investors' focal points during the boom part of the business cycle when investors are busy chasing technology stocks and high-growth companies. In fact, defensive stocks rarely tend to see high rates of organic growth.

Some of the stigma surrounding defensive stocks has changed in the last 10 to 20 years, and there are some relatively new entrants that are also considered defensive. That said, time will have to determine which of the older stigmas prove right and wrong.

Get Out of Debt – Start Making Money

Want to get out of debt, get a mortgage and save for retirement? Investopedia’s FREE Personal Finance newsletter shows you 7 Steps to Become Financially Independent. Take control of your money and Click here to start managing your finances like the pros.

The top two reasons to focus on consumer staples


Keys to Putting Together a Conservative Portfolio of Common Stocks

We have to wait patiently until we see small cap rally in the market. These types of stocks will have demand especially during later stages or final stage of bull market. Still I haven't done any serious study on it. 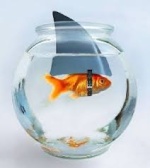 Posts : 447
Equity Stars : 3680
Reputation : 10
Join date : 2012-09-16
Guys can anyone tell me about cinv. Because all the other shares are moving except cinv. Infact it has come down. Earlier it was around Rs.108 range but not it has come down to Rs.87.
i thought it should move up since it is an investment company and most of the shares it has invested has moved.

Why does it stuck in these prices????

Re: Guard Your Portfolio With Defensive Stocks