When Negativity Helps a Bull Market

As a fan of investor psychology, I find sentiment intriguing. Measuring it is a challenge. We can’t trust what people say because they become bullish after they buy and bearish after they sell, convincing themselves that past trades were the correct way to go. Humans are notorious liars -- especially to themselves. When they are not lying, they often can be found busy making excuses and other rationalizations for their actions.

Hence, we need to find more objective ways to view and measure sentiment.

That is why I find Jason Goepfert’s SentimentTrader website so intriguing. He follows an extraordinary number of indicators that track investor sentiment.

One of his recent comments has been making the rounds on social media. Paraphrased to remove the trader jargon and hyperbole, it read something like this:

The SPX has traded more than half a percent above its five-day moving average for 10 consecutive trading days in a row. In the prior 75 years, this has only happened twice -- in 1982 and 2002. Each time it marked an end of a multiyear bear market. In other words, this is a rare rip higher that has only occurred previously at the end of multiyear bear markets. Each time it happened came after a mild, four-week drop. It’s incredibly uncommon and wholly unexpected.

I contacted Goepfert to see if he could provide more insight into what this unusual sentiment reading means. After all, sentiment measures are notoriously fickle, and tend to generate more noise than signal -- the exception being when they reach extremes.

Which was exactly his point. On Oct. 15, SentimentTrader’s metrics reached just such an extreme. Out of 85 measures he tracks, 43 reached unusually high levels of pessimism all at once. That many metrics pinning the needle at the same time has only happened at other intermediate-term lows, according to Goepfert.

“We've now seen a momentum `kick-off' from those extremes,” Goepfert said. “That combination of extreme pessimism followed by a blast in price/breadth typically leads to further gains at least in the intermediate-term of the next several months.”

This can be seen in the following chart: 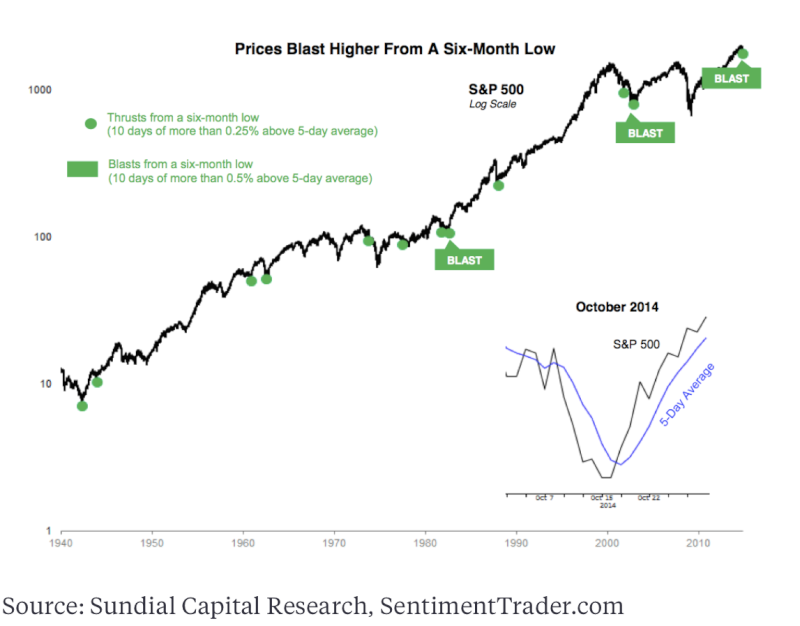 There are several other random elements at play here that could challenge the historical value of this metric. A sample set of two -- 1982 and 2002 -- is very small. These might have been random events that occurred just twice during the 75 years after World War II.

The second is the fact that in September stocks had recently traded at new highs. One doesn't associate those levels with phrases such as “extreme pessimism.”

Then there is the issue of the Federal Reserve, including quantitative easing and short-term interest rates stuck at zero. Fed policies helped boost corporate earnings and goosed the financial markets. Most market participants won’t go as far as Paul Singer of Elliott Management has, claiming the entire market rally is a fabrication, but there is lots of skepticism that the rally is sustainable.

That sort of sentiment seems to be exactly Goepfert’s point: Historically, markets like those we're seeing now have led to positive returns.

There has been a consistent disbelief in the validity of the market's gains practically since the post-meltdown lows of March 2009. Six months after that bottom, I called this the most-hated bull market in history. Nothing has changed since then.

Except prices. Markets have rocketed higher despite, or more likely because of, this persistent disbelief.

Until that changes, until the Paul Singers of the world give up on their great conspiracy theories, the path of least resistance is upward.

To contact the author of this article: Barry Ritholtz at britholtz3@bloomberg.net.

To contact the editor responsible for this article: James Greiff at jgreiff@bloomberg.net.

When Negativity Helps a Bull Market

Is it New Year Celebrations?
Is it the typical British Breakfast?
Or how one should begin the day's trading with?

@Senior Citizen wrote:By the way VP what is the significance of your Avartar that you use on this forum?

Is it New Year Celebrations?
Is it the typical British Breakfast?
Or how one should begin the day's trading with?

Actually there is not such significant in my Avatar. I picked it by chance. Later I found this Avatar is very important as it represents Food and beverages. I reasonably believe all types of food companies will have growth in the coming years and decade.
Consumer staples are defensive and not cyclical. If we analyse global population especially Asian population how much demand they are going to create in the coming years for different types of food and beverages? It is wise to identify some quality food stocks in Asia. Actually current situation has create us some opportunity to identify great stocks at a great value. I will share if I find some stocks. We should share quality stocks each other if we find them.  Other thing is in the middle and final stages of major uptrend new sectors will lead the market. We also should be able to identify bottom for some stocks. Stocks never go to zero unless it becomes bankrupt or other factors. Good luck

Very essential sector for life's sustainabilty and continuity. This sector is very strong and gradual growth is certain. However, the growth p.a. Is between 15-25% depending on whether it is retail, manufacturing or trading.

I am very thorough on the the three.

Posts : 3326
Equity Stars : 10206
Reputation : 347
Join date : 2014-02-26
Unlike those days we hardly find monopoly in many businesses now. For example there are many producers such as milk producers, retailers, trading companies etc in their industry. I believe strong competitors, great opportunity identifiers and innovative mangers will outperform others in the coming years. Experienced mangers know how to carry out their businesses for foreseeable future. Some companies also could have strong marketing arm locally as well as internationally.

@VALUEPICK wrote:Unlike those days we hardly find monopoly in many businesses now. For example there are many producers such as milk producers, retailers, trading companies etc in their industry. I believe strong competitors, great opportunity identifiers and innovative mangers will outperform others in the coming years. Experienced mangers know how to carry out their businesses for foreseeable future. Some companies also could have strong marketing arm locally as well as internationally.

That's true...those who play hard to survive in the competition are definitely gonna outperform.

Re: When Negativity Helps a Bull Market