Posts : 680
Equity Stars : 4245
Reputation : 1
Join date : 2015-05-11
The Monetary Board has decided to keep policy rates unchanged, given improvements in the economy and the positive outlook going forward.
Following is the statement issued by the Central Bank after the June monetary policy review meeting.

The Sri Lankan economy expanded by 6.4% in the first quarter of 2015, with positive contributions from all three key sectors of the economy. The Services sector and the Industry sector grew by 7.5% and 6.5%, respectively, while the Agriculture sector displayed strong signs of recovery.

Going forward, the prospects of improved performance in advanced economies along with low inflation and low market interest rates are expected to benefit domestic economic activity. 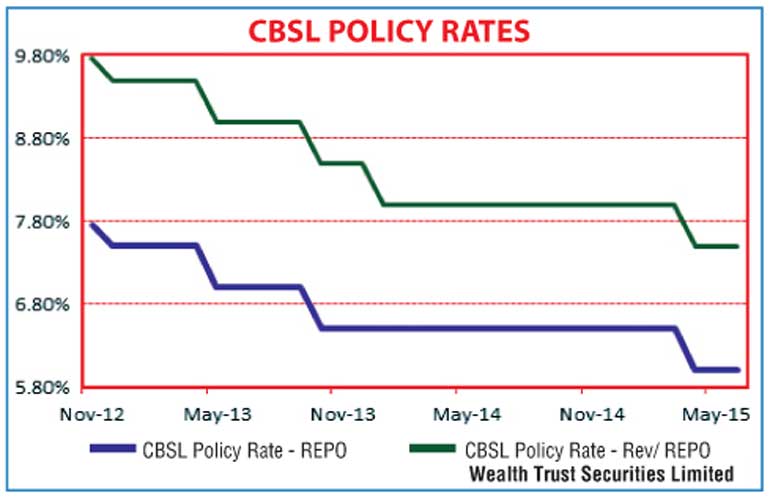 In the external sector, proceeds from the International Sovereign Bond, Sri Lanka Development Bonds, foreign currency swap arrangement with the Reserve Bank of India and regular inflows in the form of earnings from the export of goods and services, including tourism as well as workers’ remittances, improved the country’s foreign reserves.

Broad money supply (M2b) recorded a year-on-year growth of 13.9% in April 2015. The year-on-year growth of credit to the private sector in April 2015 was 15.2%. In absolute terms, credit extended to the private sector has been increasing by around Rs. 25 billion on average per month up to April 2015, supporting continued expansion of economic activity. Meanwhile, the increase in net credit to the government and State Owned Enterprises (SOEs) by the banking sector also contributed to the monetary expansion.
Inflation, as measured by the year-on-year change in the Colombo Consumers’ Price Index (CCPI), was 0.2% in May 2015 and remained well below 1.0% for four consecutive months. Annual average inflation declined further to 1.9% in May 2015 from 2.1% in the previous month.

Meanwhile, core inflation on a year-on-year basis also remained low at 2.6% in May 2015. Inflation is projected to remain comfortably below 4.0% during the remainder of the year.
In this background, the Monetary Board was of the view that the current monetary policy stance was appropriate. Accordingly, the Monetary Board, at its meeting held on 26 June 2015, decided to keep the Standing Deposit Facility Rate (SDFR) and the Standing Lending Facility Rate (SLFR) of the Central Bank unchanged at 6.00% and 7.50% respectively.
Courtesy: Daily Financial Ties 30 June 2015