Posts : 680
Equity Stars : 4245
Reputation : 1
Join date : 2015-05-11
Plunging turnover and the world’s wildest price swings mean that China’s stock market just keeps getting uglier for investors.
The value of shares traded on mainland bourses has fallen to $90 billion a day from about $380 billion on May 28, with the difference being equivalent to the average daily trading in the U.S. The Shanghai Composite Index’s volatility over the past 30 days was twice as extreme as the average for the biggest global markets. That’s bad news for government efforts to stabilize equities, according to IG Asia Pte.
"For long-term investors, high volume and low volatility is preferred," saidBernard Aw, a strategist at IG in Singapore. "Should liquidity in Chinese stock markets continue to fall, as indicated by falling volume, then we could see greater price swings."
Volatility surged as the government took unprecedented measures to stop a $5 trillion plunge, and remains elevated amid uncertainty over the state’s appetite to provide more support. Officials are widening a probe to assign blame for the rout, which has ensnared the president of China’s biggest brokerage and an assistant chairman at the securities regulator. 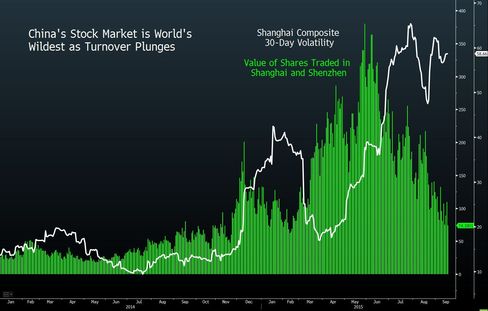 The government is trying to prevent turmoil in stocks from spilling into the broader economy, which is expanding at its slowest pace in 25 years. The nation’s financial-market volatility and growth outlook will probably be discussed by President Xi Jinping and President Barack Obama when they meet in Washington this week.
A gauge of 30-day price swings on the benchmark stock index was 57.7 on Monday, up from 48.1 a month ago and compared with the 29 average for the 19 other largest benchmark global gauges. Turnover in Shanghai and Shenzhen on Monday was 22 percent below the 30-day average.

The number of new investors has tumbled 82 percent from the peak in late May. Mainland Chinese equity funds lost 44 percent of their value at the end of last month compared with July, according to the Asset Management Association of China. Foreign money managers have sold a net $3.6 billion of Shanghai shares through the city’s cross-border exchange link since July 3.
Recent gyrations in the Shanghai Composite have only increased confusion about the level of state support. The benchmark gauge sank 6.1 percent in the two days through Sept. 15 amid speculation government buying was absent, before surging 4.9 percent the following day after the index dipped below the key 3,000 level.
"The seemingly opaque outlook for the stock market, with regards to when the government measures and support will be withdrawn, and whether the domestic market can stand on its own, are all sources of volatility," said Aw. 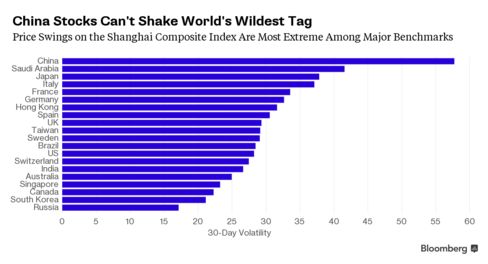 Senior Chinese officials have defended their intervention. The stock market rout isn’t a reflection of the health of the world’s second-largest economy, and efforts to stem the slide in equities fall within the “boundaries of reasonableness,” the nation’s top diplomat Yang Jiechi said in an interview on Sept. 9. China is also planning to introduce circuit breakers to help calm volatility in the stock market, with exchanges concluding a consultation on a proposal on Monday.
The Shanghai Composite gained 1.1 percent at 10:42 a.m. on Tuesday on turnover that was 21 percent below the 30-day average for this time of day.
The equity futures market, ranked the world’s busiest as recently as July, has seen volumes plunge 99 percent as policy makers curbed leverage and position sizes and announced investigations into “malicious” short sellers. Margin debt on the Shanghai and Shenzhen stock exchanges have fallen by more than half since their peak this year.
For UBS Group AG, valuations are still too expensive to justify buying Chinese shares at this level. Equities on mainland bourses trade at a median 49 times reported earnings, the highest among the 10 largest markets. The Shanghai Composite, where low-priced banks have some of the biggest weightings, has a ratio of 15.7.
"There’s a downside risk as China’s valuation is still highly bubbly," Wenjie Lu, a Shanghai-based analyst at UBS, said by phone. "I don’t see a big imminent rally."
Courtesy: Bloomberg Business 22 September 2015