CB Scam should be dealt with as a criminal case: MS 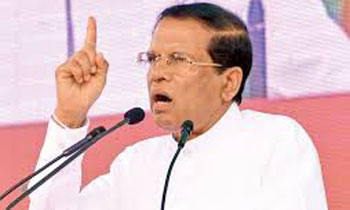 President Maithripala Sirisena said today that he had found that the investigation of the Central Bank bond scam was being carried out under civil law after the matter was referred to the Auditor General's department by the Prime Minister's office. He said it must be taken up as a criminal case.
Rejecting the allegations against the Auditor General, the President said it was he who had appointed the Auditor General who was regarded by the entire country as an honest official. "It was I who removed Arjuna Mahendran and replaced him with Dr. Kumaraswamy who is acclaimed by the whole world," he added.
Addressing a function for the opening of the replica of the Avukana Buddha statue at Abhayaramaya in Narahenpita he vowed that fraudsters would be punished irrespective of whether they were supporters of the government or the opposition.
President Sirisena stated that after those responsible for the recent Central Bank bond scam were punished he would take action to punish those involved in frauds at the Central Bank during the seven or eight years prior to the current scam.
Turning to the Ven. Bellanwila Wimalarathana Mahanayake Thera, who had earlier made a remark that the commissions were pointless, the President said that he had decided to appoint a commission on the bond issue after obtaining the advice of top legal luminaries in the country, purely to expedite the investigations.
"There were allegations that I had appointed a commission in order to sweep the matter under the carpet. Having come out of a regime that was corrupt to the core, I do not want to establish a similar rule. A thief is a thief, no matter who he is. I will do what is correct," he said.
He said that he discarded the cabinet paper to legalise homosexuality as he did the proposal to legalise prostitution. "I will reject any proposal that would be detrimental to the country," he said.
He averred that he would not give in to anybody excepting the people of the country. He reiterated his earlier stand that foreign judges would not participate in the investigations into human rights violations. (Thilanka Kanakarathna)
- See more at: http://www.dailymirror.lk/article/CB-Scam-should-be-dealt-with-as-a-criminal-case-MS-122773.html#sthash.JxYQYoyL.dpuf