» Sometimes you might find that you have lost all your money in the market by investing in the non profitable stocks in the market.
by Asoka Samarakone Yesterday at 8:34 pm

» Opportunities after CSE drop
by EquityChamp Yesterday at 11:36 am

» Pakistan keen to invest in port city: Cabraal
by samaritan Yesterday at 11:16 am

» GLAS will be winner with Super Gain.
by Promoney Yesterday at 10:26 am

» Madura takes the Portfolio Manager 2021 leadership with staggering 3.5bn
by roshan1039 Yesterday at 5:46 am 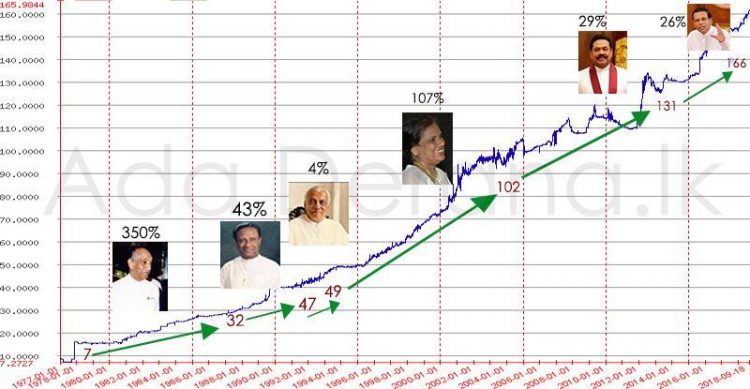 ​
Sri Lanka’s Rupee has fallen by over 2201% against US Dollar in a 41 year history since the economy was opened to the globe in 1977, the analysts notes. Accordingly as at January 1st 1977 US Dollar exchange rate in terms of Sri Lankan Rupees stood at Rs. 7.27 levels whilst as at 19th September 2018 nearly 41 year history US Dollar had appreciated making Sri Lankans pay over Rs. 167.4125 (Central Bank announced Telegraphic Transfer Rate as 19 September 2018) for a US Dollar.

Having celebrated Sri Lanka’s 70th anniversary of independence in 2018 with much political rhetoric, it would be appropriate to look back the journey of the Sri Lankan Rupee (SLR) during the post-independence period according to experts.

That time the local currency had been known as Ceylon Rupee before the country became a Republic in 1972.  Experts highlight that a country’s currency is a point of pride, seen essential to the identity of the nation, though it may not be so sacred as the national flag or the national anthem. Analysts points out that the domestic currency can also be treated as the mirror image of the economy showing its ups and downs.

“The stronger the currency, in terms of its purchasing power to exchange for goods and services as well as foreign currencies, the stronger the economy” and market experts highlight that going by the above yardsticks, it is doubtful whether we can be proud of the destiny of our Sri Lankan currency.

“If the local currency is the mirror image of the economy, the weakening of the Rupee by such magnitude is a reflection of the economic downfall of Sri Lanka” an analyst said adding that the Sri Lankan Rupee’s value is shrinking rapidly against the US Dollar.
Cont...http://bizenglish.adaderana.lk/sri-lanka-rupee-fell-by-over-2201-against-us-dollar-in-a-41-year-history-from-1977-2018/