Ranil: It is natural for foreign investors to pull their money from SL and invest in US

Posts : 345
Equity Stars : 1934
Reputation : 15
Join date : 2017-05-12
When the govt leader himself accepts that foreign investors are pulling their funds out of Sri Lanka to invest in US for better return what hope do we have about the future growth of our capital market????

The government may have to curtail imports by US $500 million to US $1 billion because of the current economic circumstances, Prime Minister Ranil Wickremesinghe said today.
The Prime Minister who attended the opening of D.S. Senanayake Gama in Hambantota said Sri Lanka would have to do so by increasing import duty.
“We are discussing various forms of debt management with the Minister of Finance and had a discussion last week as well. What we intend doing is to limit imports by at least US$500 million or by US$1 billion and do so by increasing import duties,” he said. “The industrial production in the US has increased. People there tend to spend more on purchases because of concessions given by President Trump. Interest rates in the USA have been increased lately. This has encouraged the investors to pump more funds into that county. Those who invested in Sri Lankan stock exchange had pulled out US$400 million. It is obvious that any businessman will invest in markets where the returns are high.”
The Prime Minister said this was not a problem started by this government but that the concessions given by the Trump administration and his decision to increase interest rates have created this issue.
"This has affected other countries, the Euro, Malaysian Ringgit, Philippines Peso, Indian Rupee and our rupee had gone down in value. Some countries have increased their interest rates. However Sri Lanka cannot do it because the investors will have to pay a higher rate for their borrowings,” he said. “Sri Lanka’s exports have not increased lately. We have been exporting commodities such as tea and apparels since 1977. Therefore it is essential for Sri Lanka to go in for new exports.”
Referring to the oil price issue, the Prime Minister said the price had gone up as a result of US sanctions on Russia and Iranian oil and pointed out that the oil price issue where Sri Lanka is concerned was two sided -- sanctions and the devaluation of the rupee.
However, he said there was some relief because Saudi Arabia had assured it would release 1.5 million barrels of oil daily into the market within the next six months and that this was a relief because the world market would have otherwise lost the daily supply of 1.1 million barrels of Iranian oil.
In a response to a statement made by former president Mahinda Rajapaksa as to how the government would handle this situation, the Prime Minister said, “I like to ask the former president why his government went for commercial borrowings to invest in nonproductive projects."
He assured the people that this government would not run away from the challenges it was faced with and would resolve them.
“I was handed over an economy which recorded a negative growth. I resolved it. I will resolve the present crisis as well. Therefore I request the people to trust me,” he said. (Yohan Perera in Hambantota)
http://www.dailymirror.lk/article/Govt-likely-to-cut-imports-by-US-Mn-to-Bn-PM-155922.html 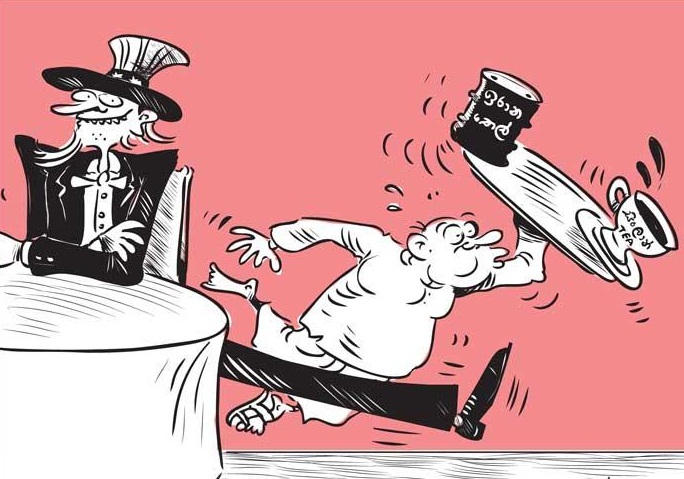