High net worth investor Nimal Perera is back in the Colombo stock market having invested over Rs. 2 billion in recent months, accumulating mostly blue chips that are trading at a bargain. 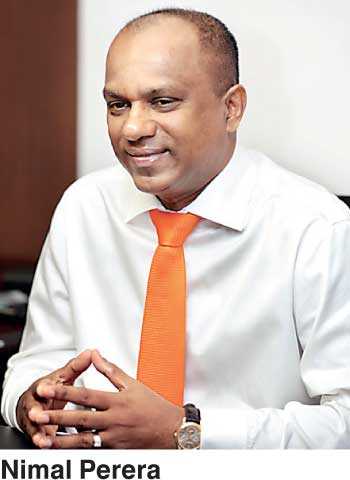 Year-to-date the All Share Index (ASI) is down 9% and the more active S&P Sri Lanka 20 Index has dipped 20% and foreigners have been net sellers to the tune of Rs. 6.6 billion.

For Nimal and the smarter investors, the setting and statistics are perfect.

“Given the low prices, especially that of fundamentally sound stocks including blue chips, this is the ideal time to buy,” insists Nimal, who is synonymous with stock market investments through which he has also drawn criticism from certain quarters.

Until a few months ago he had been on the sidelines assessing the market conditions and also diverting his attention to the Government bond market.

With foreigner funds exiting Colombo equities partly due to redemptions among other factors, Nimal has been busy.

“I have invested around over Rs. 2 billion during the past few months. Valuations in terms of price to book value are very attractive. I see medium to long-term value in some of the stocks hence I have been collecting, some from foreign funds who are selling out,” Nimal told the Daily FT. “I am largely bullish on the banking sector as well as diversified stocks,” he added.

At last week’s CSE-SEC-organised roadshows in London and Edinburgh, LYNEAR Wealth Management Managing Director Dr. Naveen Gunawardane told investors present that for the first time since 2009 most banks were trading below their book value hence they remained attractive. The Price Earnings Ratio of nine times also makes the Colombo stock market more attractive than its regional or frontier market peers.

Nimal says the bulk of his investments are self-funded and a few on margin facilities. Recently he sold his 35-room beach resort in Tangalle for $ 2.5 million to Singaporean billionaire businessman and founder of the Singapore-based organisation Hotel Properties Ong Beng Seng. In December 2017, Nimal sold his entire stake of 97% in Mercantile Produce Brokers for Rs. 1 billion after having bought it for Rs. 250 million in 2014.

The acquisitions are via his fully-owned venture capital and private equity firm NP Capital which has invested in a digital disruption startup Arimak Ltd. and newly-created ceramics and aluminium trading company Dunimac Ltd., with a showroom in Nawala.