» SGH buys EXPO from retailers
by Chula Yesterday at 11:49 pm

» What you need to remember is there is ALWAYS a way to make income from day trading stocks. Stock market for beginners and day traders
by Asoka Samarakone Yesterday at 9:00 pm

» LPRT and CHOT old and profitable businesses, yet severely undervalued
by deli Yesterday at 5:13 pm 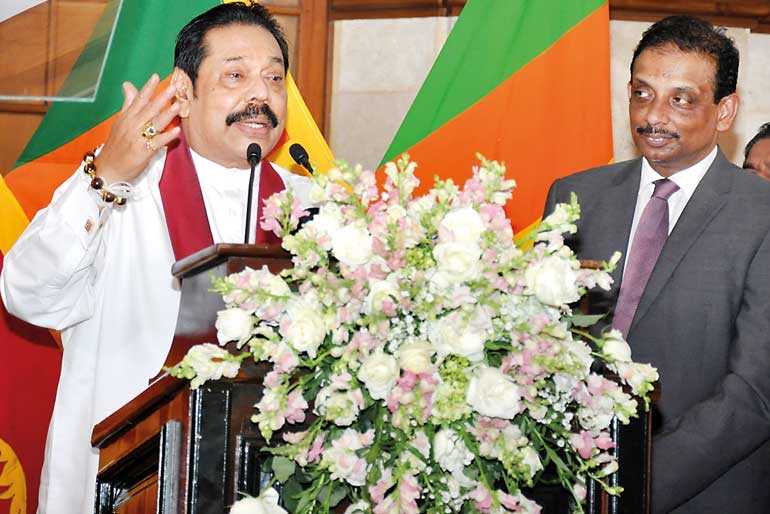 In a predictable policy U-turn, former President Mahinda Rajapaksa, who was appointed as Finance Minister by President Maithripala Sirisena yesterday, backed promoting populist and protectionist economic policies that would give subsidies to farmers, do away with the fuel formula and possibly reduce taxes.

Rajapaksa, addressing the staff of the Finance Ministry after assuming duties, also supported moving away from liberalisation policies championed by Finance Minister Mangala Samaraweera under the Sirisena-Wickremesinghe Cabinet that focused on promoting exports of tradable goods, removing uncompetitive tariffs and formulating Free Trade Agreements. Fiscal consolidation measures that were spearheaded by Samaraweera to reduce Budget deficits were also criticised by Rajapaksa as having increased pressure on rural masses.

Rajapaksa recalled what he termed as the achievements of his second term in power, highlighting the infrastructure projects, holding of multiple elections and distributing fertiliser subsidies, insisting that the currency was kept from depreciating until 2014. He also claimed that debt had reduced under his previous administration and recalled that reserves had improved to $ 8 billion before he was voted out of power in January 2015.

In the past three years, many of these steps had been reversed, he charged, citing the rupee depreciation, higher fuel prices, and reserves being bolstered through borrowing as examples. In 2012, support from the International Monetary Fund (IMF) was sought when the Government ran into a balance of payments crisis after $ 4 billion was spent to defend the rupee, which nonetheless depreciated by 14%. Sri Lanka also went through a currency crisis in 2008.

Delivering a statement targeted at his core voter base, Rajapaksa emphasised that he had held elections regularly and dismissed concerns over the proroguing of Parliament till 16 November, questioning why these same concerns were not raised when Provincial Council elections were postponed.

“The people who postponed elections for years are now upset that we prorogued Parliament for eleven days. They are acting like this is something that other presidents have not done. I have also done this, (President) Premadasa also did this. This is not significant. But, on the basis of this, they are trying to show that Sri Lanka is sliding towards a dictatorship. There is no issue here.”

Rajapaksa conceded that reducing the Budget deficit to about 5% was a positive development, but argued that this had been achieved by slashing capital expenditure that had stalled development countrywide. The smooth function of the Finance Ministry was central to putting the economy back on track, he said.

“This Ministry has many challenges to face. We want to create an economic system that benefits everyone. In a democracy, all people must get returns. Taxes must be simplified, which means moving away from the system we have now. Taxes on the public as well as local companies must be dependent on their capacity for payment. Taxes must be levied like bees taking nectar from the flower, this is what I believe. So, there must be a system for these taxes to be paid without depriving the people of a comfortable life,” Rajapaksa said.

Rajapaksa also called for policy consistency, slamming the much-maligned fuel price formula, which was introduced earlier this year to tackle escalating global oil prices and prevent higher losses being incurred by Ceylon Petroleum Corporation (CPC), insisting that it needs to be removed. He did, however, acknowledge that price adjustments would continue.

“Policy consistency is a must so that people have a way to budget for their needs. Currently, on the 10th of every month, there is a change to fuel prices. This creates uncertainty. This system must be changed. If fuel prices need to change, then it can be done the way it was before. We can’t put formulas that change prices frequently. When fuel prices go up, there is no sign of them reducing. We must change these things. We must see if these policies are fair. It is true that we as a Government need taxes, but this must be done without pressuring the public. We must be sensitive to the public and provide solutions,” he added.

Rajapaksa was adamant that Sri Lanka’s track record of never defaulting on debt repayment should be maintained, but did not specifically outline plans on how to raise money for debt repayment.

“We must work to stabilise the rupee and protect reserves. We must find a way to attract investment. Local and international investors must take up this challenge and lead from the front.”

Rajapaksa focused most of his speech on agricultural needs, appealing to public servants to support farmers and ensure harvests are purchased at a Government-mandated price. He also called for better warehousing, transport and market links so farmers would get the best possible price for their goods.

“We must ensure that money flows through the hands of our people. All 25 districts are farming now. We will give fertiliser at the right time. We need to help farmers. We have to promote organic farming and reduce exports. By February, harvesting will begin and we need warehouses and transport, and we must provide them with a fixed price. I am confident that public servants will come together to aid in this process and give agriculture the top position in our economy it deserves.”

Taking a typical approach to economic growth, Rajapaksa reiterated his favoured view of promoting local products – eschewing imports, even though imports allow consumers access to goods and services at competitive prices. He insisted that local producers should be encouraged with import substitution, rather than competing in the export market. “Even joss sticks are being imported,” he quipped.
http://www.ft.lk/top-story/MR-backs-...cies/26-665915