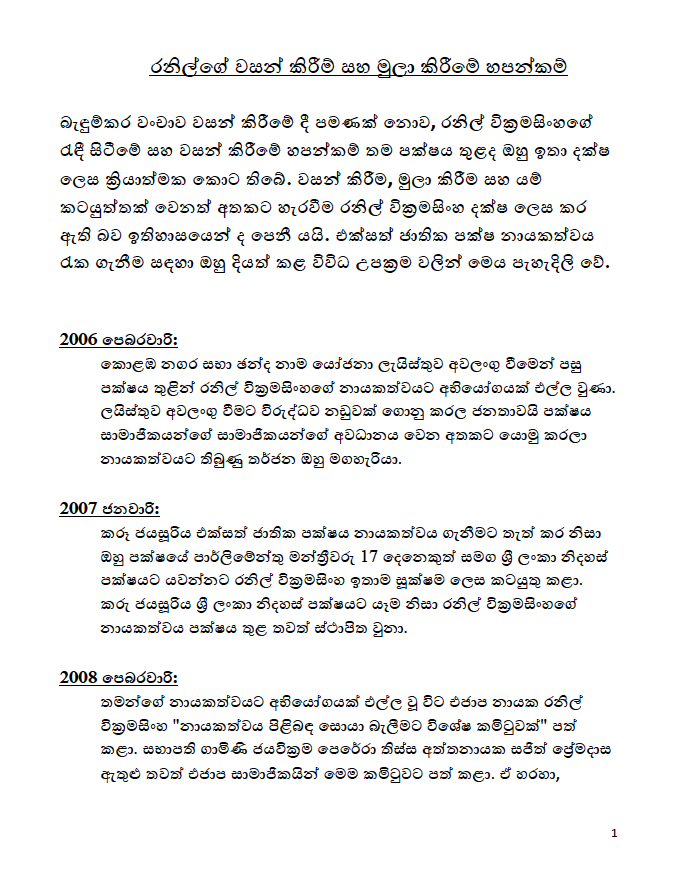 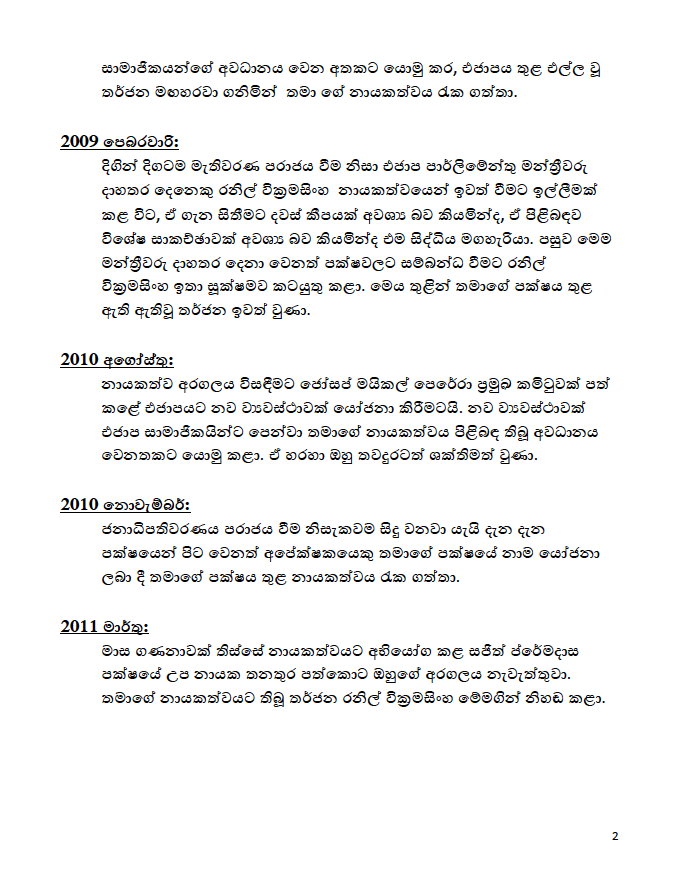 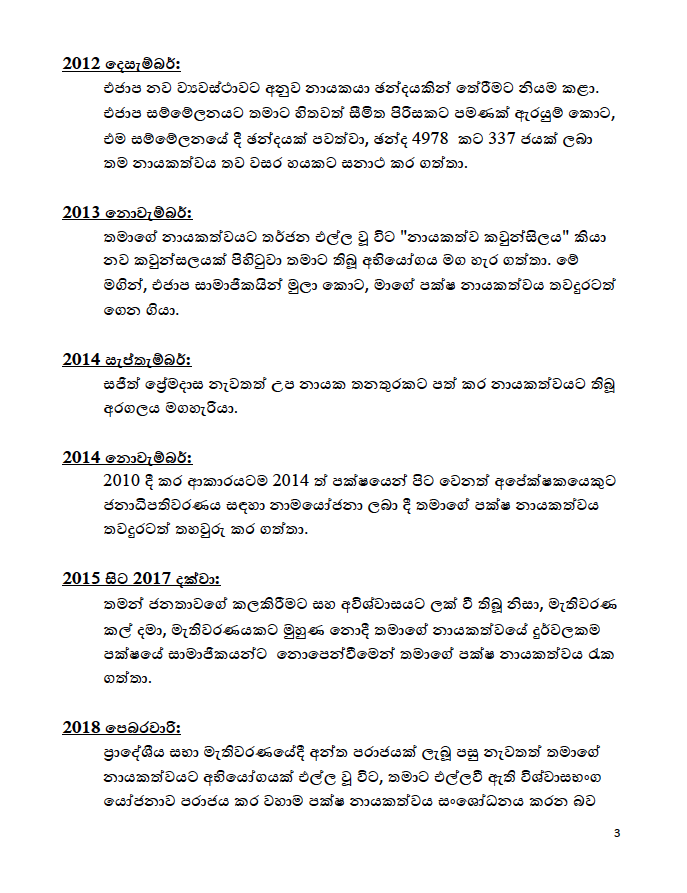 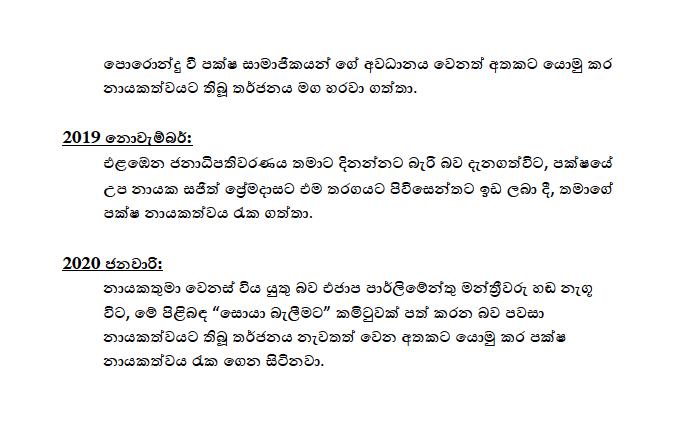 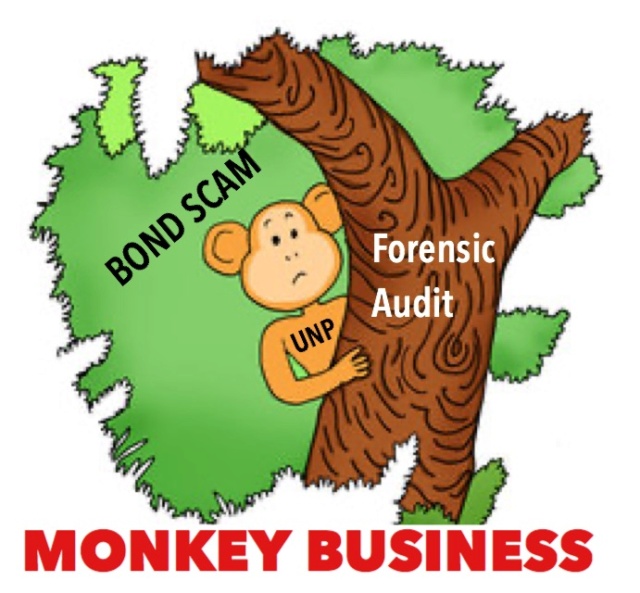 From the time the Bondscam was carried out by the Ranil Wickremesinghe administration, that administration under the guidance of the former Prime Minister had been avoiding the law by regularly bringing up various distractions so that the true nature of the Scam could be covered-up and the persons responsible could escape punishment.

Instead of a straight-forward Police investigation and prosecution, which is the most obvious and acceptable method by which all crimes and frauds are dealt with, that administration orchestrated various non-punitive inquiries including private lawyer inquiries, COPE inquiries, and Presidential Commission investigations, etc, so that the perpetrators including the Mastermind Ranil Wickremesinghe could evade arrest and carry out their other work without any hindrance.

In that grand scheme of deception and cover-up, a direct proposal was made to the Bond Commission by then Prime Minister Ranil Wickremesinghe, and based on that suggestion, the Bond Commission recommended a  Forensic Audit which has now been purportedly carried out under the authority of the Members of the Monetary Board. Unfortunately however, several Members of the Board were serving in the Monetary Board while the BondScams were carried out with impunity, while others had been involved in covering-up the Scams to the greatest extent possible.

As expected therefore, the purported Forensic Audit Report has been converted into an instrument to sling mud at the "pre-2015" political authorities and Central Bank administration, based on inaccuracies, distortions and downright lies.

An initial study of the Forensic Audit Reports clearly confirms that its main purpose has obviously been to "whitewash" the corrupt Wickremesinghe administration that carried out the BondScam to the greatest extent possible, and to "blacken" the "pre-2015" administration as heavily as possible.

In the next few days, a more detailed and in-depth analysis of the purported Forensic Audit Reports would be carried out in order to apprise the public of the gross inaccuracies, prejudiced statements, and the politically motivated comments. In fact, the unprofessional "cherry-picking" of data, seriously flawed analysis, inaccurate findings, deliberate overlooking of material facts, obviously false findings, and blatantly biased conclusions confirm that the purported Forensic Audits were engineered by those vested interests at a staggering cost of over Rs.300 million to further confuse the public as to the true nature and scope of the BondScam and its repercussions.

Further, the blatantly politically motivated undertones that are reflected in the purported Forensic Audit Reports also confirm the objectives of those persons under whose guidance and insistence these purported Forensic Audits were carried out. That situation is of course best described in the pithy Sinhala saying, "හොරාගෙ අම්මාගෙන් පේන අහනවා වගේ", translated as "like asking the robber's mother about the identity of the robber!"

In that context, steps will soon be taken to professionally refute and deal with the various innuendo and insinuations as reflected in the recent purported forensic audit reports as well as expose those who are responsible for these efforts, as well.

For the time being, as an initial response to the contents of the purported Reports, it can be confirmed that during the period 2006 to 2014 there has definitely not been any fraudulent activity in the issue of Government Bonds, quite unlike those Bond issues that took place in February 2015 and March 2016 due to the Prime Minister and Governor conniving and changing the 18 year old time-tested system in order to carry out the Scam. It may also be pertinent to point out that those actions of the Prime Minister and his corrupt accolyte Governor also caused losses in the region of around a Trillion rupees to the country and the economy, as per a former member of Wickremesinghe's own Cabinet.

Until such a study is done and a professional public response is articulated, for the time being it would suffice to state that billions of rupees was saved under the "pre-2015" administration through the issue of Government Bonds in a transparent and scientific manner through a time-tested method, and that huge gains and profits had been recorded through the portfolio investment activities of the Employees Provident Fund. In fact, the unrealised profit of the EPF's share portfolio as at end December 2014 is recorded in its financial statements as being over Rs.20,000 million, while the realized profit from 2011 to 2014 was a further Rs.14,580 million.

The Bondscam of the Wickremesinghe-Mahendran duo has already been clearly documented and exposed by many analysts and experts. Sufficient evidence and material is also available to carry out a prosecution of the Mastermind of the Scam as well those who have been aiding and abetting the crime. Those who have actively assisted in the cover-up of the Scam have also been clearly identified.

All aspects of this extensive and high-powered cover-up and the part of the cover-up that the purported Forensic Audit was designed to play, have already been highlighted in my recent book, "The Great Bondscam Cover-up". A summary of such book with a few updates would be released to the media within the next two days in both English and Sinhala, so that the true nature of the cover-up could be conveniently grasped by all those interested in bringing the culprits of this Scam to justice.

As already known, the various allegations made by former Prime Minister Ranil Wickremesinghe and his corrupt cohorts as well as the insinuations carried in the Bond Commission report had already been shown to be partisan, erroneous or false.  That was the reason as to why the Wickremesinghe administration could not press any legal charges against the "pre-2015" Governor or other officials during the near 5 years that the Wickremesinghe Government were in power.

Needless to say, when such detailed response to the purported Forensic Audit is made public, the insinuations and innuendo as set out in the purported Forensic Audit Reports would also meet the same fate as that which befell certain erroneous COPE strictures, PM's vituperative rantings, and the Bond Commission's unfortunate insinuations, as those too would soon be proved as being without a rational basis or foundation.

In any event, any follow up decision pertaining to the Bondscam prosecutions would have to be made by the Attorney General after weighing the evidence available. In that regard, it has already transpired that Speaker Karu Jayasuriya has released these flawed Reports against the direct advice of the Attorney General, perhaps to provide some respite to the currently beleaguered former Prime Minister who is battling his own Party rank and file to safeguard his faltering leadership which is now being directly challenged.

It must also be said that it is already abundantly clear from the periodic revelations in the media that the "post-2015" Yahapalanaya leadership had shamelessly influenced and coerced Police Officers, Judges, Witnesses, Court Officials and Public Officials, with impunity, for their political advantage. From all accounts, it is also obvious that it has only been because of such influence that the Bondscam perpetrators have been so far able to evade responsibility for their crimes. In that background, the best course of action for the present government would be to entrust the entire Bond Scam investigation to the CID, so that a proper and impartial investigation could now be carried out with the goal of bringing the perpetrators to book.

Therefore, it is strongly urged that the Government immediately establishes several CID Investigation units to thoroughly investigate all aspects of this dastardly crime, so that the perpetrators of this heinous white-collar crime could be brought to book as fast as possible. Needless to say, the entire country is eagerly waiting until that is done. 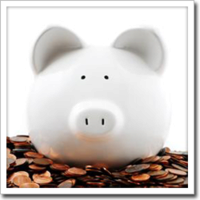 Posts : 239
Equity Stars : 3104
Reputation : 18
Join date : 2013-11-12
EPF during 2011-2012 bought the worse shares at crazy high prices where they were duped into buying. Like grain elevators, ashok layland, laughs gas, bairaha to name a few. They lost so much money which they will never recover