» FINANCE AND LEASING SECTOR
by Mohammed020 Yesterday at 6:20 am

FINANCIAL CHRONICLE™ » CORPORATE CHRONICLE™ » How does a coronavirus antibody home test kit work, and how do I get one?
Tweet

How does a coronavirus antibody home test kit work, and how do I get one? 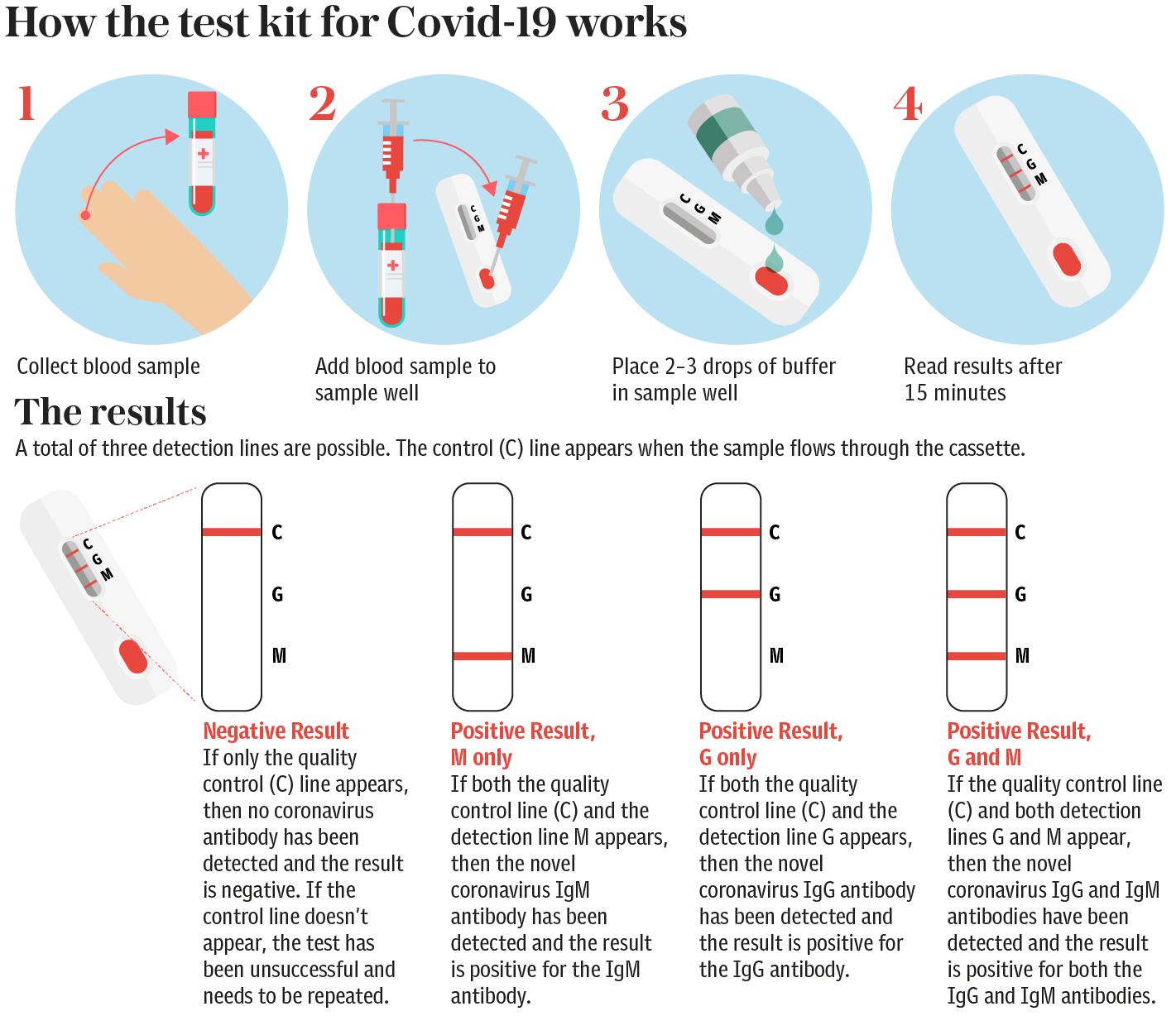 The Government has outlined plans for Britons to conduct coronavirus antibody tests at home, with finger-prick kits that will be available from Amazon and Boots.

But what are these tests – and do they work?

What is an antibody test?

An antibody test can detect if a person has had coronavirus before and has since recovered. The test, carried out by a device that pricks your finger for blood, works this out by testing your blood for coronavirus antibodies to see if they have already beaten the virus and gained some immunity to it. It can do this in about 15 minutes.

The coronavirus swab test that the Government currently uses can only tell whether a person has the virus, not if they have had it and recovered. These swab tests also take much longer to get a result.

The antibody test is also known as a "serological test".

The Government had been hoping to roll out millions of antibody tests in the coming weeks, but supplies from China have so far failed to pass sensitivity and specificity tests.

Ministers will attempt to recoup taxpayers' money spent on the fingerprick tests after an Oxford University trial found they returned inaccurate results.

The failure is a significant setback because it had been hoped the antibody tests would show who had already built up immunity, therefore offering a swifter route out of lockdown.

Earlier last month, however, Professor Karol Sikora, a private oncologist and Dean of Medicine at the University of Buckingham, validated a test kit using samples from staff at his clinics, which were then verified by a private lab.

Around six per cent of staff were found to have had the virus but, crucially, under-40s who had tested positive came back negative, suggesting the test may not be useful for the wider population.

Siemens Healthineers, a German diagnostics and medical imaging firm, also announced on April 23 that it is producing an antibody blood test to identify past coronavirus infections.

The blood tests will be available to large labs by late May, the company said, adding that it will be able to provide more than 25 million tests per month from June thanks to an upgrade to its manufacturing site in Massachusetts.

Another antibody test being pioneered by Oxford University could be available by the end of May, according to Professor John Newton, the UK's national testing co-ordinator.

What is an antigen test?

An antigen test detects the presence (or absence) of an antigen, not antibodies. An antigen is a structure within a virus that triggers the immune system's response to fight off the infection. It can be detected in blood before antibodies are made.

An antigen test is effective because it can take a few days for the immune system to build enough antibodies to be detected in a test, however, antigens can be detected almost immediately after infection. So, in theory, the test can tell much sooner whether someone has the virus.

Antigen tests are used to diagnose HIV, malaria and flu.

Will NHS staff be tested?

The test will enable NHS staff to know if they have been infected with – and have recovered from – the virus so they can return to work.

Who can get a coronavirus home test?

In theory, anyone would be able to buy a test from Amazon or Boots. Last month, the Government ordered 3.5 million fingerprick tests, mainly from Chinese manufacturers, and later placed provisional orders for 17.5 million tests from nine firms including some based in the UK.

None of the tests were found by Oxford to be reliable enough for mass use. It could now be months before an effective coronavirus testing kit, that can be used at home, comes on the market.

But, earlier this month, some companies were still selling the antibody tests online to individuals who are desperate to find out if they have acquired immunity from the coronavirus.

On April 26, the Government was forced to deny claims it had ordered up to 50 million home testing kits.

Department of Health sources dismissed a report that 50 million antibody tests had been ordered by ministers at a cost of as little as £10 each.

Can I get a coronavirus test?

Public Health England had said that a small number of tests would be tested in a laboratory before being distributed via Amazon and sold in Boots. Had the tests passed the laboratory testing, they would then have been available to everyone.

How much would the test cost?

The Government has not yet released any official information about the cost of a test – though it would clearly be in the public interest for them to be affordable to everyone. Finger-prick tests by SureScreen, a British company, cost £6.

Who makes the coronavirus test?

Mologic, a Bedfordshire company that produces pregnancy tests, was granted £1 million by the Government to develop the coronavirus test.

SureScreen, a Derby firm, has created a finger-prick test which they say takes 10 minutes to return a result and is 98 per cent accurate. The tests are reportedly being used by private companies in a number of European countries.

Why are these tests important?

A widely available test that produces results so quickly would drastically change the UK's strategy for dealing with the virus and would change our daily lives.

In the NHS, staff would be able to return to work sooner if they know whether they have already had the virus.

People who have already had the virus and are immune would, in theory, be able to return to work and go back to their normal lives.

The impact of these tests on the economy and on public health could be enormous. See how the tests work below.

Do they use these tests in other countries?

The UK is not the only country ordering the tests.

Professor Sharon Peacock, the director of the national infection service at Public Health England, said: “Tests are being ordered across Europe and elsewhere and purchased in South-East Asia. This is widespread practice. We are not alone in doing this."

While some countries, such as South Korea and Germany, have successfully tested far more people than in other countries, these tests are in most cases the much slower swab tests.

Hundreds of thousands to be tested each day by NHS

The NHS could start testing hundreds of thousands of people per day for Covid-19 within a matter of weeks, NHS England's medical director has said.

FINANCIAL CHRONICLE™ » CORPORATE CHRONICLE™ » How does a coronavirus antibody home test kit work, and how do I get one?