Sri Lanka: An argument for cancelling the household debt

Sri Lanka: An argument for cancelling the household debt 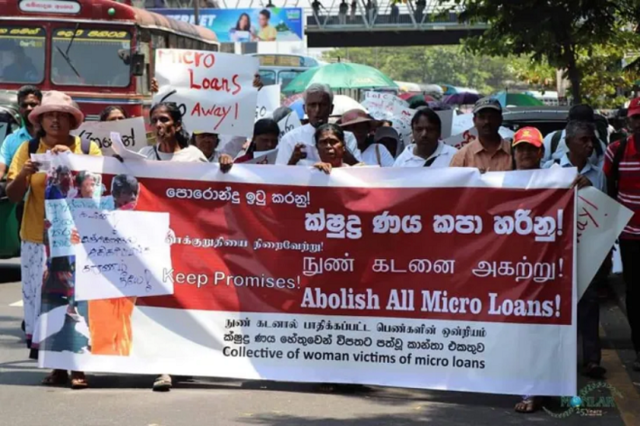 What happens when debt cannot be paid? Could the creditors take over all of the assets of the debtors? What happens when debt becomes a pound of flesh?
Debt is a structural issue
Debt is an age-old economic relation. In Sri Lanka, the traditional land tenure system functioned based on debt. Peasants across generations were bound to the ‘overlord’ or temple. Pressed with tenurial obligations, peasants lived at a low subsistence level. At the backdrop of the British land policies and the advent of the plantation economy, social relations based on the land tenure system underwent some changes – like transforming the landlord-tenant relations to landowner-tenant. However, the living conditions of the peasants and the poor did not change much. The commodification of land enhanced its exchangeability and created a landed class. The transformation of the traditional society into a plantation-based commercial economy benefitted the higher-ups in the social ladder, who were often traditional élite. Peasants were oppressed. The debt was a perennial problem. The Kandyan Peasant Commission observes that being economically disadvantaged had broad consequences – “no land, no money; no money, no education; no education, no jobs; no jobs, no money for education or the purchase of cultivable land.”

Debt is parasitic
As much as debt is a perennial problem, what is alarming today is the return of pre-capitalist forms of debt. Garbed in modern terms such as microfinance, hire-purchase, leasing, gold loans, mobile loans or online loans, these new forms of debt instruments perform a similar function. As the financial sector expands, it has become profitable to invest in the financial markets than productive sectors of the economy which generate jobs, raise people’s income, and expand people’s welfare.

The amount of wealth extracted from villages and localities of the urban poor in the form of debt collection explains sub-standard living conditions low-income households are in across Sri Lanka.

Debt is a symptom
Increasing household debt could indicate failures in the provision of essential services and goods. For a country with free education and public health care, private household costs on education and health care are somewhat unusually high in Sri Lanka. To illustrate the point, according to the Household Income and Expenditure survey in 2016 the average monthly household expenditure on education is Rs. 2066/. The average monthly medical expenditure per household in the same year totalled Rs. 2529/=.

As one moves away from the metropolitan areas, disparities in the public education and health care system become visible. As I was conducting fieldwork in a rural area in Polonnaruwa, a woman mentioned that collecting money for various purposes in schools has become a recurrent phenomenon. As a single mother supporting her child, she had to meet these expenses somehow as she did not want her child to feel uncomfortable and excluded among the other children.

The socialisation of increasing public debt as a result of various austerity policies pressured on governments by multilateral lending agencies like the IMF, World Bank and ADB, is in return met with increasing individual borrowing at the household level. A narrowed focus on the morality of debt obscures problems in the big picture. Instead of evaluating the public policy and state failure, household debt re-locates the complete responsibility on the individual and often along gender and ethnic lines. National statistics on household debt illustrates how it is unevenly distributed among women and working people from minority communities.

As much as a failure of the public system, debt, enormously increasing debt among the low-income households, explains a stagnant economy. The economy over the years has not been productive for the working people. As wages continue to stagnate vis-à-vis cost of living, various debt instruments have come to sustain subsistence of thousands of low-income, lower-middle-income to middle-income households. According to household income and expenditure data in Sri Lanka, the household income of the poorest 50% have stagnated over the last decade. Debt has bridged the gap between stagnating income and rising expenditure.

Debt is not Credit
It is assumed that a loan will contribute to creating wealth. This is the rationale advocated by ideologues of Microfinance like Muhammad Yunus and those who push entrepreneurship as a model of poverty alleviation and development. As stories of women caught up in debt traps caused by microfinance loans in Sri Lanka point out, loans alone are insufficient to nurture entrepreneurs. This has been the case in other South Asian and South-East Asian countries where microfinance has become the popular means of financing rural development. There is a plethora of literature which brings out primary evidence against the alleged empowerment and entrepreneurial capacities of microfinance. Given the precarious nature of low-income households, minor accidents in the family or a change in weather could push them below subsistence which inadvertently affects debt repayments. What happens when a loan becomes a bad debt?

A sovereign state has several options to deal with unsustainable public debt. A State could either opt for debt restructuring, request debt relief or choose to debt default. However, the households are left with no alternative but to increase borrowing, either from other microfinance companies or from the informal money market. Unlike for the States, for the households, unsustainable debt has become punitive.

According to a woman from Polonnaruwa, the pressure of meeting debt payments was so intense that they had to forego meals to pay the debt. In another case, a debt collector had demanded that her child’s maintenance be given to cover the monthly debt repayment. Obligations to support unsustainable levels of debt have pushed people into more precarious forms of borrowing such as daily payments. The latest efforts by microfinance companies to recover the debt is to criminalise borrowers through the judiciary. Microfinance companies are using the judiciary as debt collecting agencies. Around 200 people have committed suicide owing to various harassments by debt collectors. Using institutions of justice as a noose to coerce the debtors is bound to create another socio-economic and a humanitarian catastrophe.

Freedom from debt
Recognising that some debts cannot be paid is a part of prudent economic policy. Compelling debtors to repay by rendering them homeless, landless and pushing people to destitution overlooks how such measures stifle the development potential of the masses. For example, the massive amount of extraction of wealth from the villages in the name of debt collection is evidence for usurious lending practices. After meeting debt payments, farmers, fishers and small-scale producers at the grassroots level do not have anything left to invest in their livelihoods. On the other hand, finance companies do not contribute to productive economic sectors either. Their investments are primarily in finance, insurance and real estate sectors.

Apart from throttling productive capacities of the people, debt forecloses on people’s future. In other words, debt not only hinders a person’s development capacities today but also in the future. Obligations to meet debt payments close down all kinds of future possibilities which is thoroughly anti-democratic and unjust.

Hence, debt cancellation remains the only way to restore the productive capacities of low-income households and emancipate them from the modern bondage of debt. Debt cancellation policies must accompany a system of regulations on the financial sector to ensure that they function as facilitators of productive elements rather than as rentiers. On the other hand, governments should wake up from the entrepreneurial dream. It must be an appealing dream for governments wishing burdens of poverty alleviation and rural development away from their economic priorities. Privatising the costs of development would seem like most efficient and productive in the face of increasing public debt and debt servicing obligations. However, multiple financial crises at the household level manifested in the forms of suicides of farmers and women across South Asia prove that it is only an illusion.

Sri Lankan development statistics recognise the vital role played by the households and non-profit sector serving households in making the highest Gross Value Addition to the national economy. In other words, despite attempts to industrialise smallholder farmers, fishers and producers still create most of the wealth. Apart from creation wealth, the informal sector is also the biggest employer in the country. Therefore, emancipating these sectors and working people in these sectors should be a policy priority of a government envisioning inclusive development. It is a fundamental need today as we are grappling with the new moment created by a global pandemic. Debt cancellation for the working people should be a cornerstone in such a policy orientation.

» After Sri Lanka Says It Can No Longer Pay Its $51bn Debt, IMF Fears Nigerian Govt’s Debt Exposes Banks To Risk
» Sri Lanka Government Debt to GDP
» Monday or next week what will happen to chicken family and bli
» The Best Possible thing which We can do with the Current Market
» Sri Lanka's Debt Dynamics